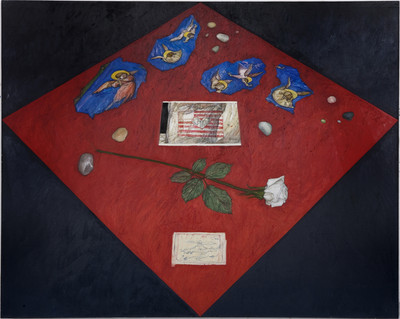 February, season of masks, appears to want to reveal its true self. There is no definition to the sky this morning in Bella Vista, and there is no depth but for the tumbling snow.

January in contrast could hardly disguise its brutal heart. Mummers spray graffiti was still stuck to the sidewalk when it took from Bella Vista one of its most fundamentally honest and unpretentious men, David Wycoff. David was part of a team of federal lawyers who defended men and women sentenced to death. Capital punishment is a racist and arbitrary institution. It’s on the wane in the US, in part thanks to people like David, who seek justice for everyone. His work was integral to the October ruling that stayed the execution of Philadelphian Terrance Williams.

Hundreds came to David’s extraordinary funeral, where the names of men and women he had helped save from the death penalty were read. Hundreds poured into his family’s small row house on Mildred Street to pay their respects. They tumbled up and down the stairs and into the kitchen and out onto the street. They pressed against one another, the liberal intelligentsia, the members of Society Hill Synagogue, the friends from the neighborhood, public interest lawyers, and teachers, stunned and sometimes sobbing at the mendacious soul of January.

Then the hundreds, different and yet the same hundreds, climbed crooked marble stairs to the second floor walk-up art studio and apartment of the painter Regina Granne, who died Sunday in Greenwich Village, New York. Regina was the first cousin of my mother-in-law, an artist and thinker of enormous and persistent vision. Even at her funeral she spoke forcefully through her paintings (two of which were placed at the front of the room) about feminism and war; all together she challenged how we see the world.

What do I wish to say to you, January? You don’t know it, but you reminded me that cities are still for people–and I don’t mean in an abstract way. Intimate, even iconic urban places like Bella Vista and Greenwich Village can draw us in great magnificent hordes into their tiny private spaces–in sorrow, in community, in a kind of celebration. Those spaces defy everything about our culture, I think, and for that these two defiant people, David and Regina, would be glad.