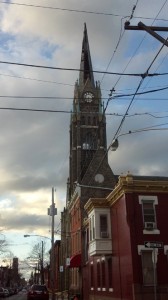 The 1894 St. Bonaventure church, notable for its distinctively tall, slender steeple jutting from narrow Ninth Street and visible throughout North Philadelphia, is the latest significant religious building to be threatened with full or partial demolition. Prospects for securing and mothballing the church or finding a long-term reuse appear dim because of the expense of such repairs, the owner’s lack of resources and continued neglect, the unlikely availability public funding, and the lack of commercial potential for the site. For Chandra Lampreich’s photo essay on St. Bonaventure published on Monday, click HERE.

“Finding a path forward for this building is a very difficult task, especially when one considers the number of similarly preservation worthy buildings in the city, with less restoration needed and in more stable neighborhoods, that also sit fallow,” said Jeffrey Alligretti, president of the real estate firm Innova

The church is located in Fairhill, a mostly Latino neighborhood with a poverty rate of nearly 60 percent and a median income less than half the citywide level.

The fate of this significant church, like that of demolished St. Boniface and the teetering Church of the Assumption, is likely a harbinger of future preservation struggles for Philadelphia. While there have been some major and minor successes, including nimble emergency preservation work at the 19th Street Baptist Church, the sheer number of blighted and underutilized religious structures–perhaps as many as 200–leaves a daunting citywide backlog of maintenance. This problem is expected to increase as the Archdiocese of Philadelphia closes more parishes. 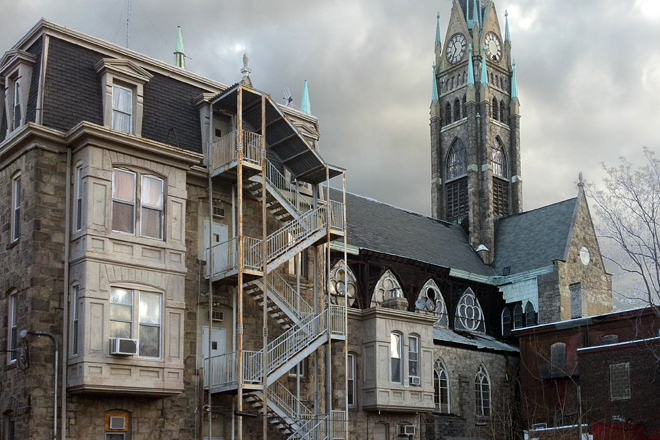 The south side of St. Bonaventure Church | Photo: Michael Greenle

Bonaventure was designed by the architect Edwin Forrest Durang, who came from a family of actors close to the famous actor Edwin Forrest. Durang is responsible for other notable religious structures, including Church of the Gesu in Francisville, Roman Catholic High School at Broad and Vine, St. Agnes and St. James in West Philadelphia, and several Lower Northeast parishes. He also designed the Trocadero Theater. 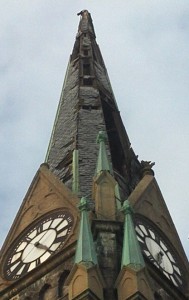 St. Bonaventure’s declining condition has been known for years. In 2009, the Preservation Alliance of Greater Philadelphia placed it on their list of endangered buildings. Two weeks ago, Fox29 News reported on its rapidly declining condition–and danger due to falling slate roof tiles. As of yesterday, the church steeple stood with a large gash on its northern face, and with shingles fluttering in heavy winds.

“It was our family’s parish and I was a ‘daughter of Mary’ there for many years,” said Seventh District Councilwoman Maria Quiñones-Sánchez, who district includes Fairhill. “It’s a beautiful church that should be secured, and public safety is paramount.”

Since last June, the City’s Department of Licenses and Inspections has kept an open case on the building. The structure is considered unsafe, although not imminently dangerous, according to Maura Kennedy, L&I spokesperson. Kennedy said the structure was reviewed by an L&I inspector in November 2012 and because the property had deteriorated further (and is expected to continue to decline), the department took the case to Equity Court, a division of Common Please Court, for hearings on property violations. The city will seek to compel New Life Evangelistic Church to assess and make the repairs. A hearing has not yet been scheduled, and the property continues to be monitored periodically by L&I inspectors, according to Kennedy. In the meantime, the city has secured the sidewalk outside the church to address the problem of falling tile, detailed in the Fox29 report. 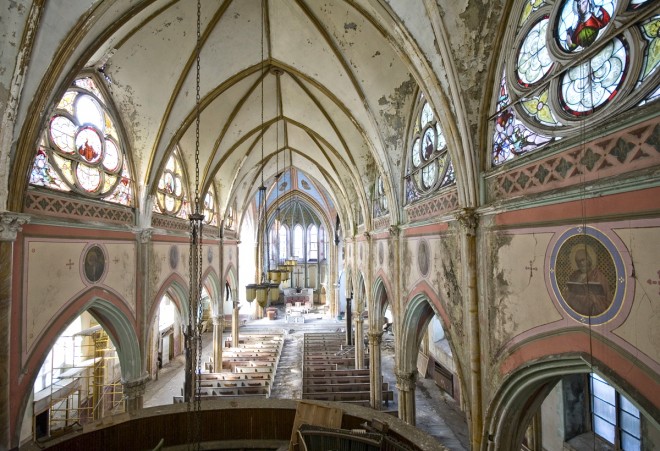 Once the case is opened in Common Pleas, the court is expected to hear testimony and use an independent engineer to assess the state of the property. If the owner fails to make repairs, the City is expected to seek permission to secure the building to a basic level of repair to ensure it is not a safety hazard. The costs of these measures would be placed as a lien against the property. Demolition by the City is not a remedy unless the building is deemed imminently dangerous. Because the current owner is not expected to have resources to secure the building, the church is likely to deteriorate as the case proceeds.

In cases like this one, City officials have often been able to rely on the state Redevelopment Assistance Capital Program for stabilization funds. But as of January 4, grantmaking under the RACP program has been canceled as the Corbett Administration reassesses it. “The former selection process lacked transparency and had no apparent strategy,” says a state website, explaining the “indefinite” postponement of the program.

In July last year, the Preservation Alliance collaborated with Gerry Fisher, the former executive director of Historic Fairhill, a Quaker burial ground less than a block from the church, to convene a charrette to identify creative solutions for the reuse of the church. Participants–among them staffers from Quiñones-Sánchez’s office, the City Planning Commission, Partners for Sacred Places, the Women’s Community Revitalization Project, and the Village of Arts and Humanities–vetted possible reuse options, including an arts space for Temple University, a food kitchen, an incubator, and a health center.

Because the current church congregation has sought to continue using the building for religious purposes, charrette participants considered how the space could be adapted for some commercially viable use while being a flexible enough use to allow for weekend and evening use as a sacred space. However, according to Alligretti, Bishop Jackson asserted that if the need for sacred space made the preservation impossible, he would voluntarily relinquish the building and find another suitable space for his services. 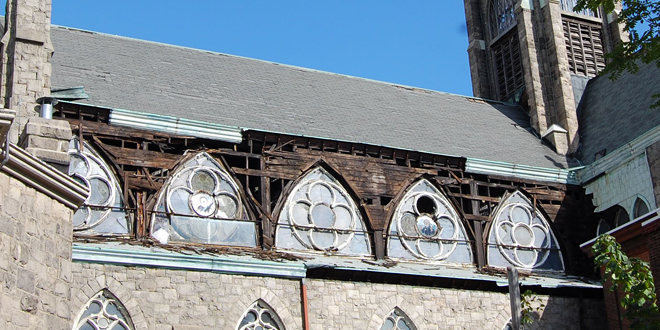 Scrappers have stolen much of the copper flashing, leaving the building open to the elements | Photo: Gerry Fisher

Fisher, who has had recent contact with Jackson, said the Bishop “would love to stay in the church, and saw it as a great hope for Fairhill.” Fisher said Jackson “trusts in God” for a solution.

Alligretti was previously involved with the adaptation of Durang’s St. Agnes church in West Philadelphia for affordable housing. He estimated the cost of securing St. Bonaventure would be several hundred thousand dollars (Gerry Fisher reported receiving estimates from $500,000 to $1,000,000). According to Alligretti, demolition would cost about the same.

Alligretti said the church can be stabilized if the water infiltration that is rapidly destroying the finishes and the structure can be stopped. This would require closing up open areas in the building’s skin where copper cladding had been removed. According to Alligretti, the roof was partially replaced by Bishop Jackson, but the work was done poorly, and in any event, incompletely. The flashing will thus have to be replaced and new architecturally appropriate asphalt shingles installed.

The steeple roof may be salvageable, but flashings will all need attention, in particular at the valleys where the roof meets the walls and upward projections. Should the steeple become imminently dangerous, it can be partially removed. Caroline Acheatel of Partners for Sacred Places worries that it will collapse, as did the steeples of two West Philadelphia churches, Christ Memorial Church and the German Reformed Evangelical Emanuel Church. But she noted that in both cases “the collapse came close to forcing the demolition of the building, but [that] never came to pass. The lesson of this is that even if the steeple falls, it doesn’t necessarily mean demolition is imminent.”

But Alligretti is pessimistic about the monumental church’s prospects. “Once these threshold preservation steps are taken,” he said, “the building interior is still wreck and will need to be restored for some still unknown use.”

Michael Greenle Michael Greenle is a Philadelphia native and public interest communications consultant who works on planning, development and preservation issues. He can be reached at michael.greenle@gmail.com.