At Philly U, A New Building Becomes A Fulcrum For Academic Innovation 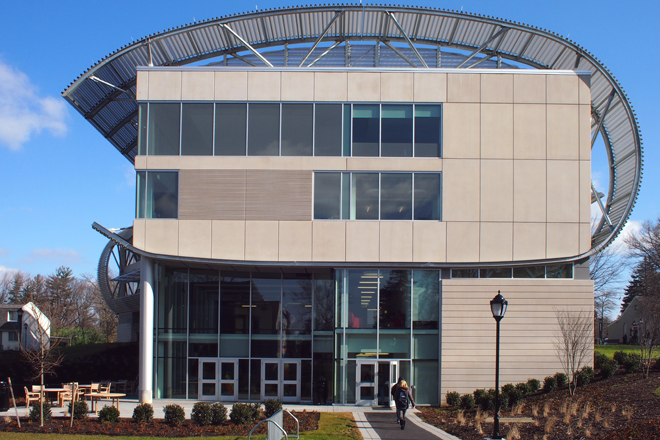 When Ronald Kander, who was a director of the James Madison University School of Engineering, where he had integrated the engineering and business curricula, was being recruited by Philadelphia University to be the executive dean of a new integrated and cross-disciplinary College of Design, Engineering and Commerce, he was hesitant. Why should he leave a great job for a fledgling educational experiment? “Do they really have a stake in the ground on integrated teaching or not?” he wondered. Many universities, after all, have given lip service to cross-disciplinary pedagogy and research, but very few have effectively institutionalized it.

But when Kander arrived on campus in 2010 for an interview, there was his proof. Architects from the Boston firm of Shepley Bulfinch were driving stakes in the ground to mark out the footprint of the new college’s building. 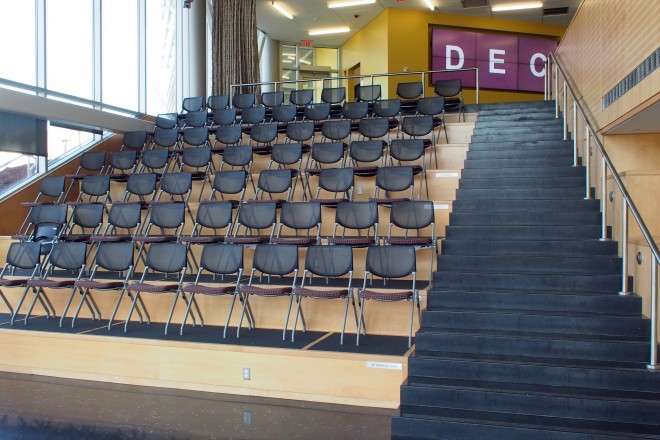 The DEC Center, a bold and light-filled paean to mechanical design, which opened to students last month, is intended to be the physical manifestation of the new college’s cross-disciplinary curriculum, one of the first of its kind in the nation and a winner of a design education award from the design industry website Core77. “Breaking down institutional structures and working collectively through the institution to reimagine and reconfigure this curriculum is evidence of an institution determined to leapfrog,” said the CORE77 judges.

“In my 21 years in academia, this was first time I’ve been able to design a curriculum first and then design the building,” said Kander.

The curriculum integrates 1,500 undergraduate students in 15 majors–more than half the student body–into a sequence of collaborative courses meant to force students and faculty out of the silo of their disciplines to draw on a broader and more critical way of thinking. “When you have the courage to get out of your discipline that’s when you grow your mind,” said the university president Stephen Spinelli, who has pushed for the new pedagogical approach since arriving in Philadelphia from Babson College in 2007. 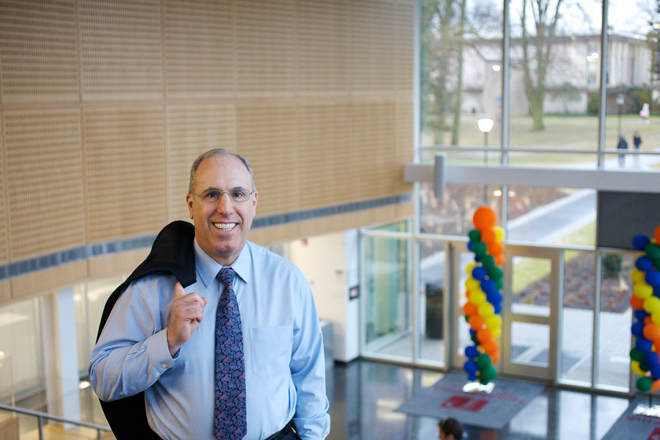 “But we had to put infrastructure around the idea,” said Spinelli, a founder of Jiffy Lube International. “So we hired cool leaders who believe in transdisciplinary education and built a wonderful building that’s completely flexible. We’ve done all that at lightening speed.”

“As we built the curriculum,” said university provost Randy Swearer, a former dean of the Parsons School of Design, who Spinelli recruited to Philadelphia in 2009, “we had to figure out concretely how people in different disciplines were going to collaborate. Designing the building became the way to do that.”

The DEC Center is the third campus building designed by Shepley Bulfinch. It forms a kind of triangle with the other two, a 1990s library and the 2006 Kanbar Student Center, but it also stands alone on a relatively undeveloped part of campus marked by an old creek bed. The Shepley Bulfinch team, led by principal Janette Blackburn, who also designed the student center, picked up on the technological and industrial history of the area. The building’s chief exterior architectural feature is a perforated metal solar screen that wraps the principle rectangular box. The edges of that screen were rendered in such a way as to resemble enormous water mill wheels, which helps give the building resonance and a sense of movement.

Inside, the entirely flexible spaces are meant to allow improvisation. “The relationship between the collaborative spaces and the break out and informal spaces–which students just occupy–this has been so powerful to see them do their work and collaborate together,” said Swearer. 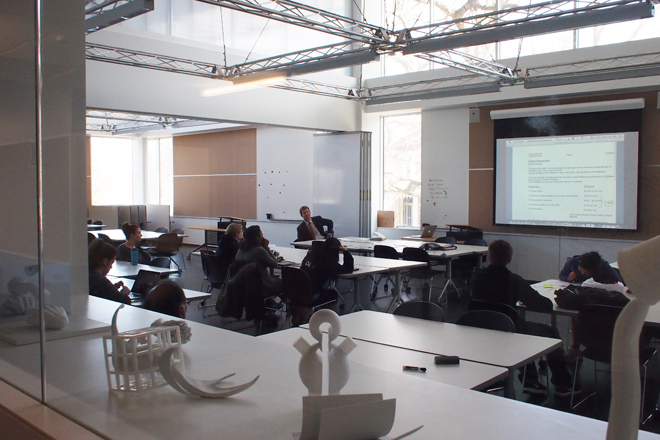 The 40,000 square foot space has only five permanent offices and none of the teaching rooms have built-in technology–professors and students are to bring their own, as needed. All chairs have wheels and all tables fold up. Room dividers are also white boards. “I have no idea how rooms will be configured when I walk in the building,” said Kander, the dean. “We’re really screwing up human behavior. You’re allowed to move things around. You have permission to change the space–even students.”

University officials say DEC is a prototype for changing the entire university’s curriculum. We’re a small and nimble campus,” said Kander, “and we’re doing this at the right time–the apple cart is already being upset.” But, “it’s really hard. I see why other institutions aren’t doing it.” In fact, while academic administrators talk often about integrative learning and multi-disciplinary classrooms, few institutions, notably small ones, have gone as far as Philly U. 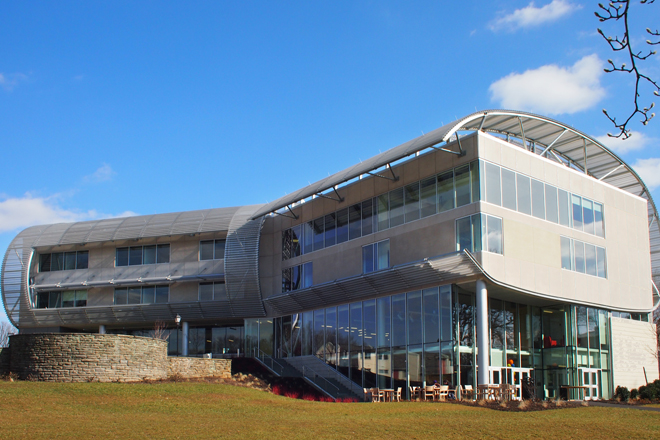 If the university is successful it will be very much the result of the backing of Maurice Kanbar, a 1952 graduate, who made a fortune inventing and marketing products, most notable Skyy Vodka. Kanbar has given $25 million to the university in recent years to underwrite the new college, which bears his name, its building, and the student center. “A gift from God,” said Spinelli, “he’s our biggest investor, and I treat him that way.”

Kanbar’s investment has propelled the school, which was still seeking direction a decade after changing its name and focus from Philadelphia College of Textiles and Science, into unknown academic territory. This makes Spinelli, who seems driven by possibility, ecstatic.

“It’s been a wild ride. I’ve never seen anything like it,” said Swearer, the provost. “Where else can you do this? It’s a very ambitious plan.”