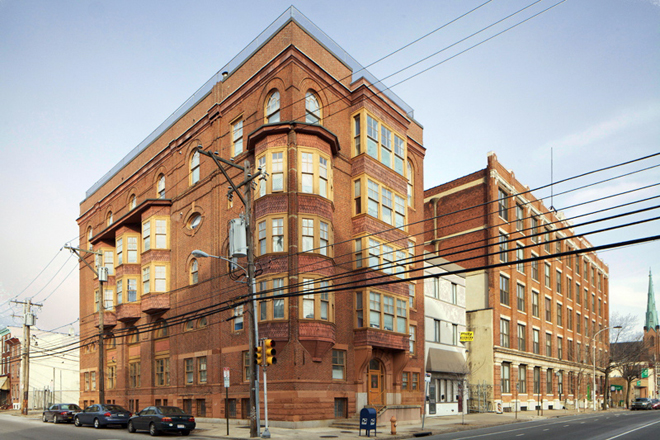 Just about the time Scotsmen John McArthur, Jr. and Alexander Calder were heading into the last decade of the construction of City Hall–built like a Scottish castle–a Scottish group was putting another stamp on this city as Edinburgh-on-the-Schuylkill: Caledonian Hall, at 13th and Spring Garden Streets.

The elegant five story Romanesque Revival headquarters of the Caledonian Club, the Scottish gentleman’s club that produced and commercialized one of the first American athletic events, the Caledonia Games, was designed by Scottish architect John Ord and opened in late 1893. It was restored a century later by a social service agency.

After the Civil War, Scots formed Caledonian Clubs and held Caledonian Games in cities across North America. The Caledonian Club of Philadelphia officially opened on April 8th, 1864 in a house on the 200 block of Pine Street. In the following decades, Caledonian Clubs drew themselves into an international organization, standardized the competitions across different cities, and opened the event to non-Scottish-descended athletes. 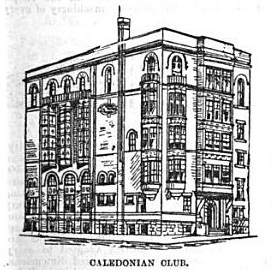 By the 1890s with the growth of other, similar athletic-based gentleman’s clubs, membership in Calendonian Clubs had begun to fall. In this case, Philadelphia’s growing Caledonian Club was the exception. Members desired a new, swank headquarters, more luxurious than any other–a building that would be built and funded entirely by Scottish hands.

The architect Ord’s five-story, 16,000 Scottish pound, 20,000 square foot iron and sandstone hall was endowed with a 1,000-person banquet room with a stage, a gymnasium with a suspended canvas-covered running track, a library stocked with books from the personal collection of Andrew Carnegie, lounges for both men and women, a secondary banquet hall, billiard rooms, a roof garden, and a 67′ x 25′ “swimming pond” in the basement.

The November 1893 opening was punctuated by a massive march of members and associates, dressed in full Scottish regalia, led by three bag pipers. Afterward, a reception in the banquet hall was toasted by Mayor (and member) Edwin Sydney Stuart.

In the aftermath, newspapers shamed the police commissioner for refusing to investigate the affair and the Social Purity Alliance publicly derided the mayor. 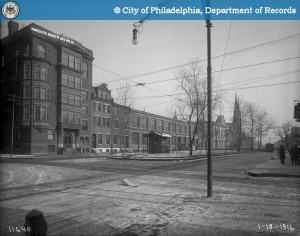 As membership slowly declined over the next few years, the Club rented out their gymnasium for boxing events and leased their extra meeting space in the upper floors to other clubs that lacked a clubhouse. Down to just a few dozen members in 1906, they rented out the entire building for commercial offices. The first company to make the building their home was the Koch Paper Toy Company, which stayed there from 1907-1909. In 1910, the American Assurance Company took over the leased space and re-named the structure the American Building.

That only lasted until 1915. In 1916, the Baltimore-based Immediate Benefit Life Insurance Company emblazoned their name across the top of the Spring Garden facade. Only one year later, the National Traffic Service Bureau became the headline tenant. Finally, in 1918, the Caledonian Club put the building up for sale, asking $75,000. Across town, the International Association of Machinists had long been raising money for a new meeting hall. The old Caledonian Hall was large enough to hold the meetings of multiple unions at once. Its location was only a block away from their anti-union arch-enemy, the Baldwin Locomotive Works (Matthias Baldwin being, of course, of Scottish descent). 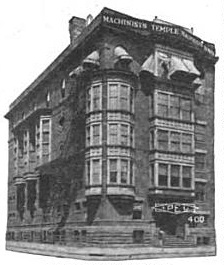 They talked the Caledonian Club down to a $55,000 sale price and moved in on October 21, 1919, re-naming the structure the Machinist Temple. The union added a cafeteria to the basement, a 1,200 seat auditorium on the first floor and on the top floor, and a caretaker’s apartment. Inside, locals of electricians, boilermakers, polishers, molders, stone masons, carpenters, teachers, and stevedores assembled in the building’s many meeting rooms into the late 20th Century. The Caledonian Club (what was left of it) still met in their old Hall until at least 1939.

In 1991, Genesis II’s Caton Village, a live-in rehabilitation center for homeless women and their children, purchased the old Caledonia Hall for $50,000, ending a years-long search for adequate quarters. Public grants and private donations totaling $1 million paid for the restoration of the dilapidated building. The new Caton Village location went into operation in September, 1994 and has been serving the same purpose ever since.

Today, Philadelphia’s Caledonian Hall appears very much like it did in 1893… at least from the outside. Most of the club’s gilded age neighbors are long gone, leaving this section of Spring Garden Street with little evidence of its turn-of-century grandeur. 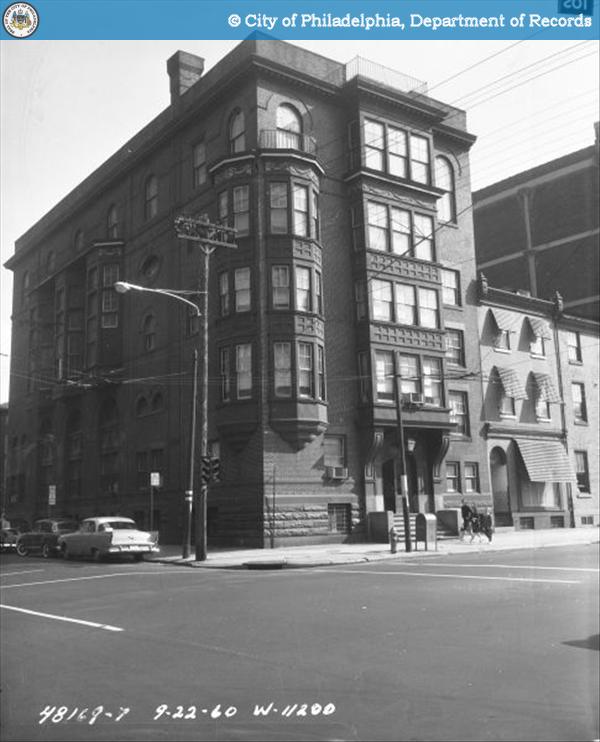