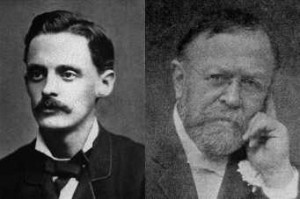 Editor’s Note: Readers loved Harry K’s dipping into his encyclopedia for a story on Philadelphia’s telephone history–“Wired City”–so much that Harry came back with this: “Wireless City,” on Philadelphia’s pioneering role in the development of wireless/radio technology.

Philadelphia’s wireless tradition begins in the 1870s. Elihu Thomson (1853-1937) and Edwin J. Houston (1847-1914) were both teachers at Central High School who experimented with electricity and together invented an arc street-lighting generator system.

Professors Thomson and Houston became the first to illustrate the principles of radio communication. One day in 1875, during a routine physics lecture, Thomson was demonstrating the operation of an electrical spark gap generator. In the school observatory about a hundred feet away and a floor above, Houston observed a small blue spark jump from the surface of a brass doorknob to the tip of a metal pointer he held in his hand. This was perhaps the first recorded occurrence of electromagnetic energy transmitted through free space. Elihu Thomson’s doorknob was thus perhaps the first antenna. 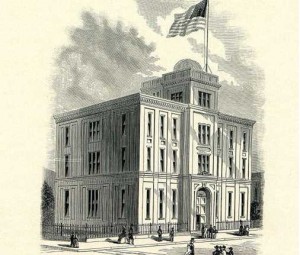 Upon accepting the Franklin Institute’s Franklin Medal 50 years later, Thomson remarked: “Perhaps I might remind that the principles underlying the miracle of radio communication were first demonstrated in the laboratories of Philadelphia’s Central High School.”

The miracle, of course, created a certain madness for wireless. For example, wireless telegraphers held a national contest in the city on February 23, 1910, to test speed and accuracy in receiving and transmitting American Morse telegraphic code signals via radio. The United Wireless Telegraph Company sponsored this, the first radio contest in the world. An operator of United Wireless’s Station on Young’s Million Dollar Pier, Robert F. Miller, won the competition.

Until this time, radio broadcasters did not operate under any regulations or rules–the Radio Act of 1912 was the first law regarding interstate communication by radio. The US Department of Commerce issued its first experimental radio license–serial number 1–to what was then St. Joseph’s College. After this, other schools and entities began to apply for radio licenses.

It wasn’t until 1922 that the Department of Commerce began issuing formal (commercial) broadcasting licenses. Radio station WIP-610 AM became the first licensed commercial radio station in Philadelphia on March 17, 1922. Owned and operated by the Gimbel Brothers Department Store, WIP–“Wireless in Philadelphia”–was the city’s “Pioneer Radio Voice.”

In June 1922, the first remote dance band radio program was aired in Philadelphia when WIP broadcast the big band music of Charlie Kerr and his orchestra from the Cafe L’Aiglon at 15th and Chestnut Streets. Philadelphia was the center of live dance music for radio listeners–all the way to “Bandstand.”

That year’s Thanksgiving Day, WIP transmitted the first football game broadcast on radio from the University of Pennsylvania’s Franklin Field, featuring a contest between Penn and Cornell University. 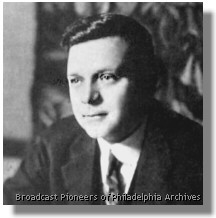 The world’s first radio show for children was apparently the “Uncle WIP” program. Christopher W. Graham (1893-1932) was the first Uncle WIP beginning in the station’s earliest days. Reading birthday announcements and bedtime stories over the air, he made a place for himself in the hearts of children in Philadelphia and across the country (since there were so few stations, listeners could hear distant ones more easily). On the Sunday program, Graham would have kids come into the Gimbel’s studio to perform on “Uncle WIP’s Kiddies Hour.” This was thus the nation’s first children’s talent show on the radio. By 1925, Graham was so popular that he was thought to be the Philadelphia’s main spokesman. The city even provided him with a vehicle with the license plate: UNCLE WIP. After Graham’s sudden death following surgery, the Uncle WIP program continued on radio and television into the 1950s with other hosts.

Meanwhile, radio station WCAU-1210 AM went on the air in May 1922, two months after WIP. WCAU’s founder was an electrician named Wilson Durham, who started the 250-watt station in the back of his shop at 1936 Market Street. In 1924, he sold the station to Ike Levy and Daniel Murphy for $25,000. When Murphy lost interest, Levy persuaded his brother Leon to join him. In 1928, they convinced their brother-in-law, William Paley, who was working in his father’s cigar business, to buy a financially-troubled 16 station network called United Independent Broadcasters, of which WCAU was part. Paley used $500,000 of his family’s money to purchase the network, which he renamed Columbia Broadcasting System. WCAU in Philadelphia was the CBS network’s flagship station. 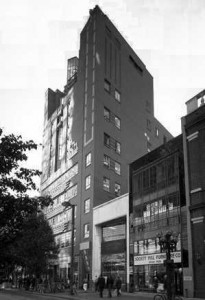 The WCAU Building on Chestnut Street now headquarters of the Art Institute of Philadelphia.

After a short stay at 39th and Chestnut Streets, the studios were moved to 1321 Arch Street, and then to a state-of-the-art-facility at 1622 Chestnut Street. The landmark WCAU Building on Chestnut was the first building in the United States constructed expressly for radio broadcasting. Completed in 1928, it included eight studios–including one large enough to seat the entire Philadelphia Orchestra, which played live over the CBS Radio Network from WCAU–and a special technical sound workshop used by Leopold Stokowski. The glass and metal Art Deco structure once even had a glass tower that glowed blue at night when the station was on the air. After a progression of power boosts, the station finally attained its 50,000 watt clear channel status. The building now houses the Art Institute of Philadelphia.

Wireless opened up the possibility of transmitting pictures via radio waves as well as sound. Photographs were first transmitted by radio waves on March 3, 1923. The images were sent from the U.S. Naval radio station in Washington to a receiving station inside Philadelphia’s Evening Bulletin newspaper. This test was conducted by the North American Newspaper Alliance with scientists and newspaper publishers in attendance. Photos sent and received were of Presidents Warren Harding and Calvin Coolidge, and Governor of Pennsylvania Gifford Pinchot.

Television was indeed looming. We’ll get to that soon, but for now this is Harry K, signing off!