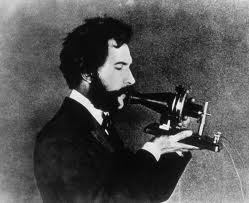 During the first American world’s fair, the Centennial Exposition of 1876 held in Fairmount Park, Alexander Graham Bell exhibited his first telephone apparatus. “To be, or not to be, that is the question,” said Bell, and for the first time in public, the human voice was transmitted over the wires. On the receiving end of the transmission was Dom Pedro II, the Emperor of Brazil, and others, who distinctly heard Bell reciting Shakespeare. Soon after this, eager crowds at the Franklin Institute–then located in the Atwater Kent mansion, present home to the Philadelphia History Museum–were the first hear predictions about coming uses of telephones–homes, offices, and factories.

The first intercity phone call in the world apparently occurred on April 2, 1877, in a building at the northwest corner of Tenth and Chestnut Streets, then the quarters of the Western Union Telegraph Company. Elisha P. Gray, Alexander Graham Bell’s great rival in telegraphy, used his “telegraphic reed transmitter” to send a signal over ordinary telegraph wires to New York City. The call was actually the world’s first long-distance telephone concert. In the Western Union building, pianist and music instructor Frederick Boscovitz played a piano that was heard by an audience at New York’s Steinway Hall. Subsequent concerts with other instruments and singers were also performed by players in Philadelphia and transmitted to New York. And you thought Skype was pretty amazing. 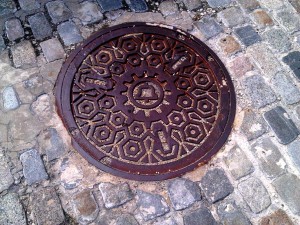 A Bell Telephone Company manhole cover along a street in Old City.

John Wanamaker’s was the first store in the world to install Bell telephones for the public to use. This occurred as far back as 1879. Wanamaker’s established the world’s first private phone system in a store by 1900. It was the first to offer 24-hour telephone service for order taking in 1905. The store would eventually have the largest private branch telephone exchange in the world. In 1915, more than 2,000 phones were needed to take care of over 1,800,000 messages.

By the 1880s, the downtown area of Philadelphia was virtually littered with wooden “telephone” poles carrying telegraph, telephone and electric light wires of competing firms. All this made the streets ugly and increasingly dangerous, as storm damage often caused lines to fall, often short circuiting other lines. Compelled to act, on June 13, 1882, City Councils voted to notify all of the owners of overhead wires to begin placing them in underground conduits. Councils later took up the issue again, resolving in 1885 to require the placement of all electrical wires underground between Vine and South Streets and between the Delaware and Schuylkill Rivers. The work took years to accomplish, and it appears that Philadelphia was the one of the first cities in the world to place overhead electrical wires underground. (Years later, in 1912, AT&T installed its first underground cable between Philadelphia and Washington, D.C.) Aside from Center City, which is generally free of overhead wires and poles that support them, Philadelphia has regressed in this regard.

Bell competitors incorporated the Keystone Telephone Company of Philadelphia in 1900 and secured franchises authorizing them to operate as an independent or opposition company in Philadelphia and vicinity. Keystone reportedly installed the first phone system in the world with all wires in underground conduits. 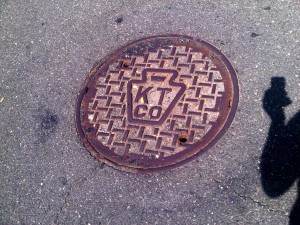 A manhole cover of Keystone Telephone Company of Philadelphia, still in service today in Northern Liberties.

Keystone competed with the Bell Telephone Company which had been organized some twenty years before. As a result, Philadelphia had two independent telephone system–along with their separate wires and exchanges–in first half of the 20th century. Keystone catered primarily to business customers, which is why most city businesses maintained two telephones and advertised two phone numbers. Keystone also handled municipal, police, and fire communications; for years, city workers called each other on “the Keystone.” All this made Philadelphia the last large city in the United States with competing phone companies. When Bell finally bought out Keystone in 1945, it was one of Bell’s last competitors in the nation. There are still many manhole covers around Philadelphia that say “KTCO.”

The Keystone Telephone Company was once headquartered at the site of what is now Welcome Park, at Second Street and Sansom Walkway. This was once the location of “The Slate Roof House,” where William Penn lived while in Philadelphia from 1699 to 1701. The Slate Roof House was demolished in 1867 to make way for the Commercial Exchange Building, which burned down a year later. The French Empire structure was rebuilt in 1870; for years it was used by the Philadelphia Chamber of Commerce. In 1901, Keystone took it over. The Bell Telephone Company eventually came to own the building before selling it in 1944. It was abandoned in 1961 and then torn down in 1977-1978. 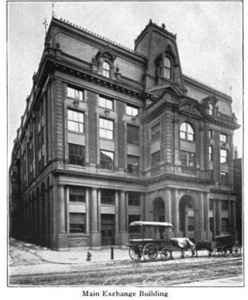 The first intercity telephone conversation entirely by underground cable–as opposed to overhead wires–apparently occurred between Philadelphia and New York in 1906. Laying of the 87-mile-long cable began in 1905. The line had no amplifiers, so the signal was weak and could not be practically extended any further. Still, this intercity connection grew into the countrywide phone network known today.

On February 11, 1915, ringing of the Liberty Bell was used to inaugurate transcontinental telephone service. The bell was tapped with a mallet and its sound was electrically amplified and sent over phone wires (with amplifiers along the way) from Philadelphia to San Francisco. This was the first official transcontinental telephone call in America (The first coast-to-coast phone call really occurred in mid-1914 with a call from New York to San Francisco.)

Bell Telephone Laboratories placed the first interstate automatic telephone exchange in service on August 22, 1943, in Philadelphia. Known as the No. 4 Crossbar Switch, this tandem toll system was the world’s first four-wire crossbar toll switching machine. It was installed at the Long Lines Department of AT&T’s Philadelphia No. 2 office in the Bell of Pennsylvania building at Ninth and Race Streets. 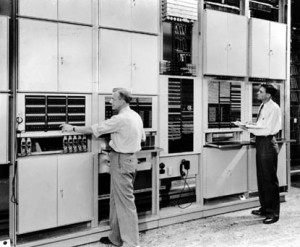 Testing part of the first No. 4 crossbar switch, Philadelphia, 1943.

A marvel of electromechanical technology in its time, the machine was actually a highly-specialized mechanical computer using relay logic and multi-frequency pulse dialing (the forerunner of modern touch tone dialing) for switching telephone calls. The Number 4 allowed long-distance operators to dial numbers in distant cities directly–without the need to go through an intermediate operator–by dialing a series of routing codes to instruct the machine to build up the needed circuit. Dialed codes soon gave way to local area codes, which the switch itself could translate into the needed routing information.

The No. 4 Crossbar Switch proved to be very efficient and greatly successful, but due to World War II, no additional switches like it were installed elsewhere until 1948. AT&T then modified the switch to handle customer-dialed long-distance calls. This became the No. 4A Crossbar Switch. Call-completion time dropped to ten to twenty seconds as 4A Switches and direct long-distance dialing spread across the country through the 1950s.

On July 11th, 1948, Bell installed the world’s first five-wire crossbar toll switching machine, No. 5 Crossbar Switch, in Media, Pennsylvania. This switching device became the bread and butter telephone switch in the U.S. during the 1950s and 1960s. By 1978, the Number 5 accounted for the largest number of installed lines throughout the world. Further revisions of the AT&T crossbar systems continued until 1974, by which time new switching systems had shifted from electromechanical to electronic technology.

The No. 5 Crossbar was particularly significant because it was the first switch to that could handle customer-dialed Dual Tone Multi-Frequency (a.k.a. touch tone) dialing. The first pushbutton touch tone phone dialing by users was tested in 1948 using the No. 5 Crossbar Switch in Media. Tones were generated at the subset by plucked metal reeds resonant to the desired frequencies, thus inducing tones in coils for transmission to the central office where a receiver detected them. After transistors were adapted to tone dialing in 1962, touch tone phones were introduced widely.

On June 15, 1966, Lowell F. Wingert, vice president of AT&T’s Long Lines Department made the first direct dialed transatlantic telephone call from Philadelphia to Geneva, Switzerland. Wingert placed the call to Jean Rouviere, director of the International Telegraph and Telephone Consultative Committee (CCITT) in Geneva. Paving the way for global phone dialing, this call marked the first time that a telephone in Europe was dialed directly from a telephone in the United States.