The Other Parking Problem 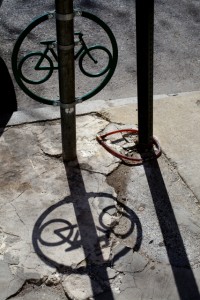 The gradual expansion of Philadelphia’s bike infrastructure, with marked bike lanes and signage, has dramatically helped to improved cycling’s utility and appeal, an achievement confirmed recently by the real estate website Walk Score, which added Philadelphia to the list of 25 US cities for which it now provides Bike Score ratings. The city’s overall Bike Score of 68 ties it with Boston as fourth most bike friendly large city in the United States, according to their survey.

In dense Center City and around, the Mayor’s Office of Transportation and Utilities has been sensibly turning some on-street parking spaces into bike parking lots and making bike hitching posts out of onetime parking meter mounts. This effort is quietly transforming the way we think about and use public space downtown.

The story is different, however, in less crowded neighborhoods, particularly in the Northeast, where I live. Out there, wide streets make biking easy even without marked bike lanes. But once you get to your destination, good luck finding a place to park your bike.

Here, private property owners can make a difference. Because many businesses in the area already provide car parking on their property, accommodating bikes should be as easy as installing a rack or two in the parking lot. 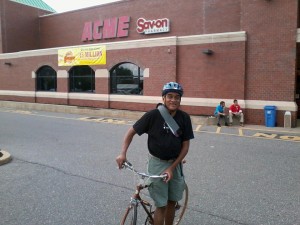 The author, on a supermarket run in his Oxford Circle neighborhood this past summer. The store’s easy to bike to, but where does one put the bike once there?

My own unscientific survey of businesses shows that very few do this, though. Only one of the four supermarkets within a 20-minute bike ride of my residence, for instance, has a bike rack on its premises.

The situation in the more pedestrian-oriented business districts is not much better. There’s car parking in the rear of several Castor Avenue stores, but no accommodation for bikes. The sidewalks are also wide enough that sidewalk bike racks could be installed without impeding pedestrian flow, but again, no such creatures exist.

The experience with even limited bike infrastructure demonstrates that bike infrastructure brings more bicyclists out of the woodwork and makes both driving and bicycling safer as motorists get used to seeing bicyclists on the street. Other districts like the Lower Northeast have similar potential–my home’s Bike Score matches the citywide average, for instance. If local business owners put out the welcome mat for bicyclists as they do for drivers, they might find more customers arriving by bike.