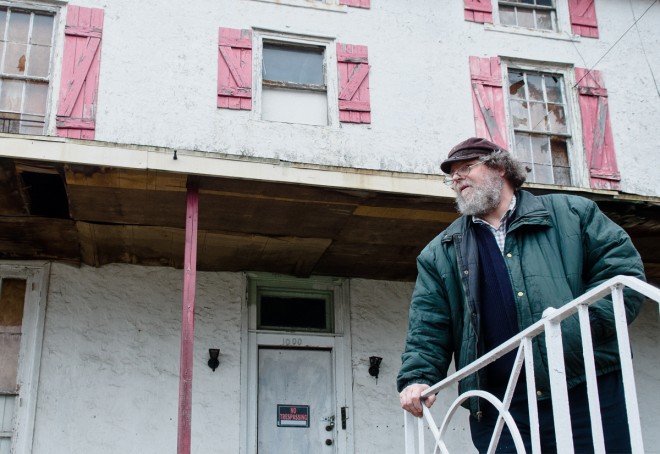 John Haigis in front of house he hopes to protect | Photo: Dominic Mercier

Soon after John and Jan Haigis jumped at the chance to live in a circa-1734 home and moved to Darby from Southwest Philadelphia, they came face to face with one of the ancient Delaware County borough’s most difficult issues: decaying buildings. In 2004, the tin roof on the house next door, 1000 Main Street, a three-story building owned by the Delaware County Redevelopment Authority, came crashing in.

Worried about the building, which sits no more than 25 feet from their house, the Haigises, now both members of the Darby Historical Commission, the borough-designated historical authority, ponied up their own cash to repair the roof with EPDM–a type of synthetic rubber–to make the house watertight and prevent pieces of the roof from winding up in their back yard.

“What do we have in this area in abundance?” asks John Haigis. “Old buildings.”

Indeed, Darby is a small borough rife with historical jewels. Situated across the street from the Haigises’ home is the Darby Free Library, the nation’s oldest public library (a piece of trivia that once made it on the television show Jeopardy!). A few hundred feet beyond the library is the Darby Free Meeting House, erected in 1805. Hike along nearby Darby Creek–the source of regular flooding issues–in winter when the trees are bare and you will catch a glimpse of Horace Trumbauer’s Woodburne mansion sitting high above the creek, tucked away behind a nursing home for nuns and encased in chain-link fencing. 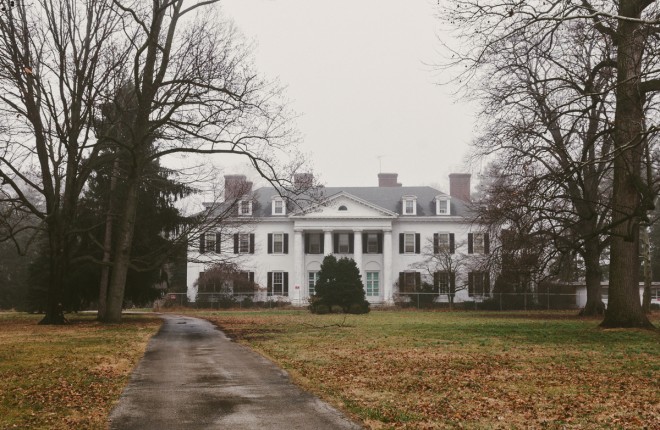 The Haigises’ growing infatuation with the house at 1000 Main Street got them asking questions about about ways to reuse and extend the lives of Darby’s oldest buildings. One answer may lie in the hands of high school kids.

John and Jan have begun collaborating with other preservationists, including Alvin Holm and Gersil Kay, to create an Academy of Building Conservation, aimed mainly at high school students and out-of-work craftsmen.

“It’s purpose is to introduce them to, and show them how to enter the huge untapped market maintaining and upgrading the millions of properties erected in the USA prior to 1940, and still in use,” Kay says. “Standing so long, these buildings must be doing something right.”

Additionally, says John Haigis, the program hopes to restore the “concept of artisans,” teaching traditional crafts while instilling the virtues of working with one’s hands.

“With some oversight from people with preservation backgrounds, [the Darby academy] could become a model for grass-roots neighborhood revitalization and high-skill vocational training,” says Penn School of Design preservation professor Aaron Wunsch. “Philadelphia has long needed something like this. If it succeeds, I would love to see outposts set up in Germantown and West Philadelphia, both of which have a wonderful and needy building stock.”

Matthew Grubel, a Philadelphia lawyer active in preservation causes, has been exploring the creation of a similar project in Philadelphia. “There are many possible variants on this concept, and I think the potential is here,” he says. He adds that a key to the idea advancing is a close collaboration with educators. “There is certainly potential, but in my opinion it needs at least one person with a strong background in education early on.”

The Darby project’s founders have begun to reach out to a work-study program in the William Penn School District, which serves the area. While the program includes the proposed academy’s target demographic, getting teenagers to share in the vision is challenging. “The Beatles are ancient history to them,” John Haigis says. “They have no context to put these buildings into.”

As organizers continue to reach out to students and potential teachers, John Haigis says they’ve already chosen the school’s first project: rehabilitating 1000 Main Street. The building, which most recently served as apartments and a doctor’s office, is in critical shape but has “good bones,” he says. 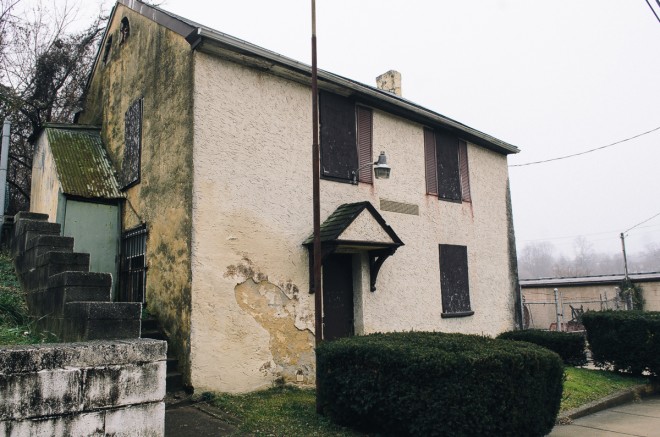 While the vision for the building is still developing, John Haigis envisions a mix of public space, a caretaker’s apartment, and perhaps professional offices. In the meantime, the Haigises are applying for grants and seeking additional funding for needed services–namely a structural survey for the building. If the project is successful, he notes that the academy already has its second project lined up: turning the 1840 borough hall, which has served as a school, jail, and borough offices, into a museum.