1926 Philadelphia Bulletin article about the Neck

Reyburn clearly did not anticipate the can of manure this would open. With their livelihood at stake, pig farmers, especially those who belonged to the Livestock Association, raised a huge outcry. They repeatedly appealed to have the pig-removal deadlines extended and circulated petitions to save their swine. One of these was signed by several thousand people in South Philadelphia. Pigs soon became a hot political issue in Philadelphia. Seeing that there was political hay to be made, city councilmen began speaking up in favor of the pigs, which they had just banned. The Neck was a solidly Republican district and Philadelphia’s Republican machine was in that moment threatened by a new reform Mayor, Rudolf Blankenburg, who was in favor of developing the Neck. Councilmen shot down bill after bill for stricter enforcement of the pig ban. With all this obstruction, the “Pig War,” as the press came to call it, would drag on for six years. 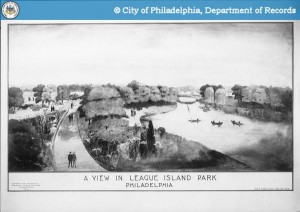 Meanwhile, construction began in 1912 on the 300-acre League Island Park, today known as Franklin Delano Roosevelt Park. Intended to accelerate the development of the area, the project quickly became a source of controversy and litigation due to its exorbitant cost. The press reported charges of cronyism.

As construction floundered, the “Pig War” took a nasty turn. With Neckers standing by their swine, in 1914 police began raiding the illegal pig farms. Like present day drug busts, dozens of police would descend on a farm en masse and confiscate hundreds of pigs. The penalty for porker possession: a $25 fine.

The “pig busts” filled the headlines in the 1910s, a kind of absurdist prelude to prohibition. Thus it was that at 7:00 on a bright May morning in 1917, the police found themselves in an armed standoff with Patrick Short, one of the last pig farmers in the Neck. With the police came two trucks, 15 health officials, firemen, and 25 laborers. As the policemen reached for their pistols, Short finally backed down.

The raid on Short’s farm was one of four that day. Police also hit the property of a neighbor, A.F. Wanner, seizing 84 pigs, and that of Patrick McCann. They pounded on the door of Fritz Muckle, but he had escaped with his 25 pigs the previous night. In all, 350 pigs were seized, trussed and loaded onto trucks in the “final offensive” of the pig war. As the families wept, the pig pens that had sustained them for generations were burned to the ground. The pig war would continue in other parts of the city and Upper Darby until the late 1930s.

Though newspapers stopped reporting on pig raids in the Neck after 1917, there is some evidence that a few Neckers continued to quietly raise pigs in defiance of the ban. Neckers who had lost their pigs turned to other livestock like cows, goats, chickens and rabbits. Many of them got jobs in the ports and factories nearby, and no longer relied entirely on agriculture. Some worked at rope factories, including the John T. Bailey Co. at Tasker and Water Streets. Others worked at the government Logistical Center at 20th Street and Packer Avenue.