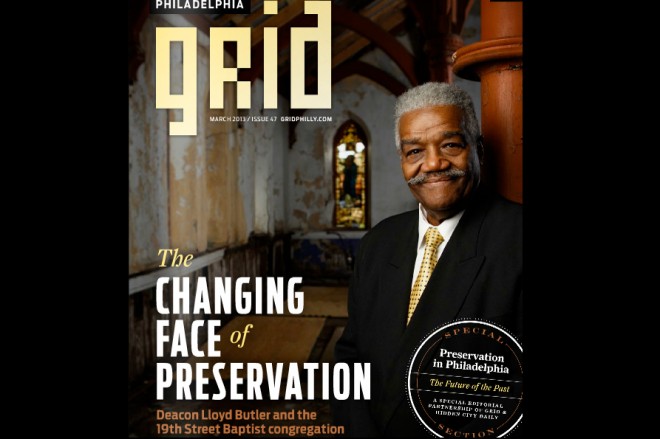 An interview with “accidental preservationist” Eric Blumenfeld and a report on the conflict over a proposed historic district in the Overbrook Farms neighborhood headline a 12-page special section on historic preservation in the March issue of Grid Magazine, jointly produced by Grid and the Hidden City Daily. The issue will hit the streets February 7.

We’re throwing an issue release party along with Grid Thursday, Feb. 7th from 6-8 PM at Reading Terminal to celebrate–free beer!–and you our loyal Hidden City Daily readers (and your friends and friends of friends) are invited. To sign up for the party, click HERE.

The issue will contain a special section on preservation, exploring this complicated subject from diverse perspectives. The stories, written by Grid and Hidden City contributors, will also appear on the Hidden City Daily along with Internet-only companion pieces.

The for-profit Grid Magazine, which covers sustainability issues in Philadelphia, was launched in 2008 and has grown since then to a print circulation of about 30,000. The non-profit Hidden City Daily began publication in 2011 and has a monthly unique readership of 30,000.

With enormous upheaval in journalism, media sites of all kinds are seeking ways to expand impact while easing costs. Almost everyone in the industry is anxiously seeking new business models and content platforms. The Grid-Hidden City partnership is meant to harness the power of the two publications’ rigorous editorial approach and cross-over readership. “I’ve long been an admirer of the ambitious and extraordinary journalism of Hidden City,” says Grid publisher Alex Mulcahy. “They’ve carved out an audience similar to Grid’s: diverse, educated, passionate and engaged. Grid is excited to combine forces with Hidden City, a partnership that is sure to expand the audience for both of our publications.”

“When we started to research the media landscape and create strategies for the Hidden City Daily, we were drawn to the success of Grid, which seemed to be one of the only growing print publications in the city,” says Hidden City co-editor Peter Woodall.

Mulcahy and Grid editor-in-chief Liz Pacheco had long imagined producing an an issue centered on preservation. Says Mulcahy, “preservation is an often overlooked aspect of sustainability. In addition to providing identity and continuity to neighborhoods and communities, old buildings save energy simply by already existing. Reuse beats recycling every time.”

Grid and Hidden City editors approached the joint issue hoping to expand readers’ notions of preservation and engage readers in what is a complex and often misunderstood aspect of urban development. The articles approach the issue from various perspectives, from the homeowner trying to restore her house to its original turn-of-the-century condition to DIYers scrambling to save a threatened church. Taken together, the special issue seeks to broaden the notion of what preservation is and who it might serve.