He Taught Us To “Read” The City 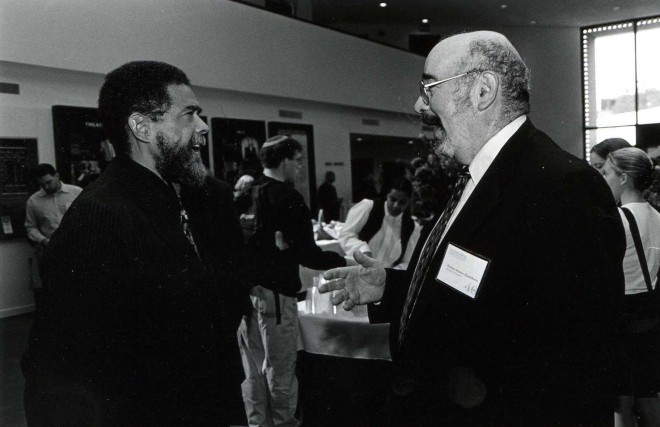 I suspect (I hope!) our readers are appreciative of Hidden City’s manner of deconstructing, framing, and humanizing complex issues. A superb example of this is Christopher Mote’s lengthy explanatory story on the conflicts in Kensington over the two monumental bank buildings at Front and Norris.

The person who first taught me to “read” the city in this way by asking why things are the way they are and who wants them that way, was Seymour Mandelbaum, the affable urban historian who taught in Penn Design’s City and Regional Planning Department. Mandelbaum, with the heart of a novelist and the warmth of a rabbi, promulgated the idea that if city plans and the planning process were interpreted–interrogated, pulled apart as narrative–we would as a society be better able to understand and imagine the way we wish our cities to be. Mandelbaum died yesterday, but he leaves with me the very basis of my approach to understanding the city. It was in his class, “Imagining Cities and Regions,” exactly 20 years ago, that I first began to see the city as an imaginative exercise. Mandelbaum had another, more personal role in my life: it was there in his class, in that basement classroom in Meyerson Hall, that I met my wife Rona Buchalter.

In recalling him this morning she said, “I was really struck by the tone of the class. Rigorous but warm. Smart but never pretentious. Respectful of the students but not deferential.”

That tone resounded even in Mandelbaum’s most important article of planning theory, “Reading Plans,” which appeared in a 1990 issue of the Journal of the American Planning Association. In that article, Mandelbaum used the 1988 Plan for Center City to portray the planning process as something that–in order to have wide meaning and impact–needs to be interpreted and deconstructed, not merely accepted–and then ignored.

“From the first, I called my scheme ‘Reading Plans.’ I soon recognized that the title was either confusing or annoying,” he wrote with characteristic self-deprecating humor. “Talk of helping people ‘read plans,’ my (usually friendly) critics insisted, was infantilizing. Worse, it smacked of an imperious class attitude that might be barely acceptable in a high school English class or a literacy program for adults. Outside those instructional settings, it grated against ordinary democratic sensibilities, they said.”

“Mandelbaum reminds us that plans are based on some story, some narrative, of the future that will be created,” wrote UMass planning professor Elisabeth Hamin, in the journal Planning Theory.

Indeed, Mandelbaum saw a narrative in the growth and development of a city; he saw protagonists, antagonists, and hidden agendas. What if all that was exposed in the process of making and implementing of a plan?

He went on, in the article “Reading Plans, “it was not difficult to think of the Plan as a literary text–rather like a novel, a social science monograph, an advertising brochure, or a historical narrative–that might be illuminated by the craft of critical reading. Why, however, stop with ‘easy’ cases? Couldn’t that craft also be engaged, I quickly wondered, to help readers interpret much sparser documents, such as the budgets and regulations that in many settings are the only ‘plan’ that really matters?”

I hope, professor, in a small way we’re fulfilling this desire.