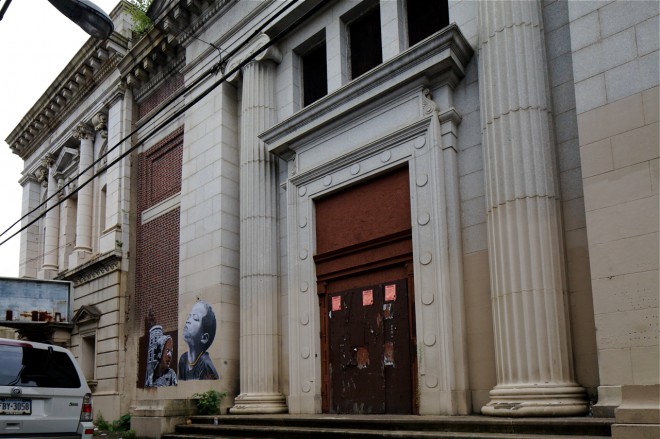 The two stately and derelict Beaux Arts banks sit at the intersection of Kensington neighborhoods in the shadow of the El, their grandeur worn by time and exposure to the elements. The two conjoined institutions, known as Ninth National Bank and the Industrial Title Trust and Savings Company, at the southwest corner of Front and Norris Streets, were central to Kensington’s role in the development of the American textile industry. They are scheduled to be demolished to make way for an affordable housing development. In reality, they have been the victim of demolition by three decades of neglect.

A diverse collection of neighbors is appealing the Zoning Board of Adjustment’s decision to allow a variance to demolish the banks, which are part of a newly approved textile industry national historic district. The variance allows for a housing complex of 25 rental units with a community center and ten parking spots on the site. The appeal of that decision, made last August after a heated community meeting, will be heard some time in the spring.

The history of both banks is tied to the days of Kensington’s reign as a leading textile manufacturing center: the era of carpets and apparel, of fabrics and dyes, which prompted one observer to liken the neighborhood to “a giant mill town set in the midst of a metropolis.” Like many of the mills, the banks have seen better days. And despite their inclusion in the historic district, salvation may have come too late.

The nonprofit Women’s Community Revitalization Project is proposing the development, known as the Nitza Tufino Townhomes, and the City appears to be lining up behind it. A staffer from the office of Councilwoman Maria Quiñones-Sánchez spoke at the ZBA hearing to indicate Quiñones-Sánchez’s support, based on the need for affordable housing in the area and the long vacancy of the buildings. The City’s Office of Housing and Community Development is also pledging funds for the project on the condition that WCRP is able to secure low-income tax credits through the State of Pennsylvania.

However, the plans have also come about, in no small part, through the blessing of the banks’ former owner, the Norris Square Civic Association and its longtime leader Patricia DeCarlo. WCRP purchased the banks in 2010 from the NSCA, yet the NSCA still holds the mortgage note to the property.

The vocal opposition to losing the banks has highlighted the differences in neighborhood approaches between bordering civic groups, and it manifested itself unequivocally at the WCRP community presentation held by the civic associations from Norris Square, East Kensington, and Fishtown. While the project is located within the community bounds of Norris Square, East Kensington Neighbors Association and Fishtown Neighbors Association consider both sides of Front Street to be their territory too. The community presentation was held in May, but came only after WCRP’s originally scheduled hearing before the Zoning Board of Adjustment in April was continued. Witnesses describe the proceedings as disorganized and charged with emotion. End result: the community vote rejected WCRP’s proposal by a three-to-one margin.

“The thing you’ll hear [Norris Square Civic] say is, ‘Nobody wants it.’ The fact is, this building has never been put up for sale on the private market,” says Jesse J. Gardner, a landscape designer and artist who owns a gallery in a converted East Kensington factory. “This is a neighborhood landmark. People had been hoping for years that someone would do something with it.” 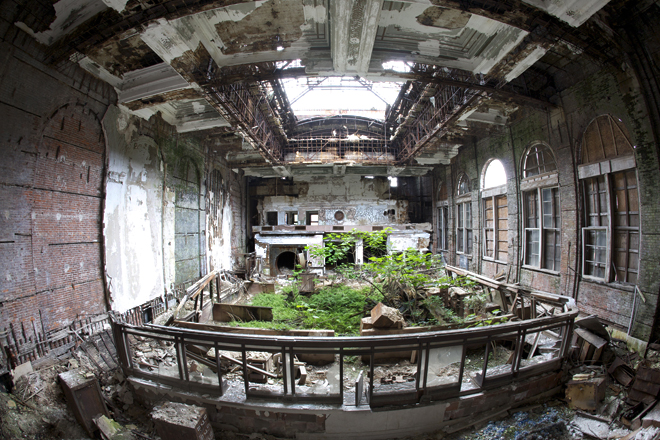 In its 30 years of existence, Norris Square Civic Association has made an indelible mark on the neighborhood–bounded by Front and Fifth and Berks and York Streets–and its increasing largely Latino population, through education outreach programs, housing and land ownership, and stabilization of the once syringe-infested Norris Square park. For years, however, a diverse range of residents and local leaders have vehemently criticized DeCarlo’s autocratic manner, her dismissal of non-Latinos (particularly non-Puerto Ricans), and the NSCA’s institutional culture of secrecy. These critiques came strongly to the fore in articles published in PhillySkyline.com and the City Paper and through the process that led last year to the demolition of St. Boniface church on Norris Square.

NSCA acquired the banks in 1989, and under their stewardship the banks have remained vacant and become uninhabitable. The once-majestic sky roof of Ninth National has caved, resulting in excessive water damage. Several windows along Norris Street have been left partially exposed. Nature has reclaimed an interior that once resounded proudly with mahogany woodwork and marble.

Conflicting Responses to a Changing Neighborhood

The nonprofit WCRP has a track record of securing public funds to build affordable housing in North Philadelphia, and several of its developments have been considerably larger. The most recent, the Evelyn Sanders Homes near Ninth and Indiana Streets in the Fairhill neighborhood, consist of 71 apartments and townhouses.

WCRP has described the Nitza Tufino Townhomes as a cornerstone of their plan to provide new housing opportunities that don’t shut out poor residents at a time when the community is feeling the push in property values from adjacent neighborhoods like Northern Liberties and Fishtown.

“Market rate developments and amenities are increasing around the site, but as a significant improvement of the Front Street corridor, the Nitza Tufino Townhomes are key to transforming this area into a mixed income community of choice,” the organization stated in a press release last year. (Representatives from WCRP and the Norris Square Civic Association did not respond to requests for comment on this story.)

Central to many neighbor concerns is the preservation not only of an historic set of structures, but of the commercial corridor that they inhabit on Front Street. “This corner is a five-point intersection in a high-impact area,” says EKNA secretary Amy Miller, who plans to file an amicus brief on behalf of her neighborhood group at the appeal. “Banks weren’t put just anywhere, they were built with the urban fabric and volume of traffic in mind, so it’s not just any commercial property.”

Tim McDonald agrees. “There’s this retail life that’s starting to come to that stretch of Front,” he says. “Only five or six years ago, no one thought of putting anything there.”

A project to restore the old Bromley Mill at Front and Jasper a few steps up Front Street from the banks has neighbors hopeful that the old commercial district under the El can rebound. (For Hidden City’s story about that project, click HERE.)

McDonald is a founding partner of the award-winning architectural firm Onion Flats, whose offices are housed in a former carpet and wire mill just across Norris Street. At one point, the mill’s owners were Ninth National Bank’s largest shareholders. McDonald co-owns the mill with his wife, who also uses the space for her pottery studio.

He admits the banks are in rough shape, but paints a picture of their undeniable beauty. “It just depends on the eye,” he says. “Of course, I’m someone who finds buildings beautiful regardless.”

Although McDonald expressed his interest to DeCarlo in purchasing the banks, she told him that she already had plans for them. He says that his inquiry never amounted to a formal offer. (“All I did was ask,” he insists.) But in other circumstances? McDonald says he would be open to any conversation that could realistically bring about their restoration.

“I would love for this to be saved for the city,” says McDonald. “We’ve seen this a million times already, where we do this and then look back and go, ‘What the hell were we thinking?'”

Preservationists believe that the shell of the banks is still in good enough condition. Saving the facade and rebuilding the inside, they claim, could still be done. WCRP disagrees, and has cited the opinion of a consulted architect that restoration would cost too much.