A Neighborhood Son Takes On The “White Elephant” 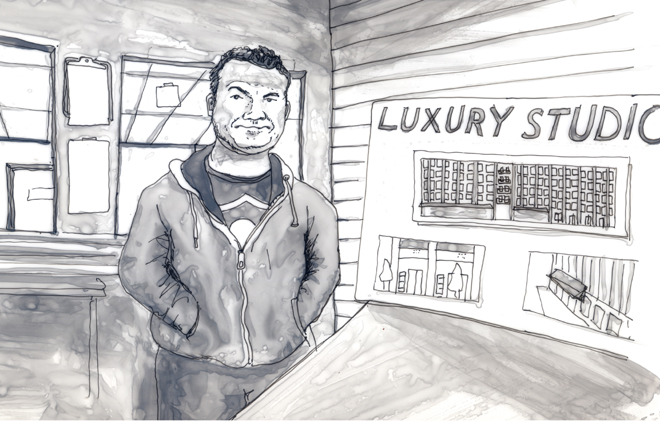 Beer with the Neighbors

This fall, Jesse was invited by the East Kensington Neighbors Association, an organization of which I am a member, to present his plan to the neighborhood. The meetings are held at the Philadelphia Brewing Company, in an ornate brick and terra cotta brewery built in 1885 by the Weisbrod and Hess Brewing Company. I wondered how Jesse would fare in front of neighbors armed with fervent opinions and complimentary glasses of beer.

Jesse told me he had been excited for the meeting. “I felt that people would be happy that the building would at least be owned by someone who cares and who would take the blight out of the block by building something beautiful. I didn’t expect controversy, I didn’t expect the IKEA thing.”

Inside the brewery’s exposed beam and brick tasting room, he presented a rendering of the building in a style reminiscent of the colorful contemporary design of the Piazza at Schmidts, a mixed-use residential and commercial development two El stops down in the Northern Liberties designed by the highly regarded firm Erdy McHenry Architecture. Jesse later explained that the design he presented was his inspiration, but the rendering was done specifically for the EKNA meeting by his friend’s son, a graphic design major at the Art Institute.

The plan was to convert the building into roughly 45 residential condo units and retail businesses. A few neighbors raised hands and asked him questions about his plans for maintaining green space and the kinds of retail stores he envisioned. Would he keep Access Check Cashing open?

In our interview, Jesse wouldn’t say. But he does envision converting the entire first floor on Jasper Street into live-work spaces, with storefronts or offices lining the street. He also explained in our interview that he’s going to attract businesses by getting involved with the almost defunct Front Street Business Association. Although he realizes that a check cashing store may not fit into the goal of attracting better businesses, he was quick to point out that for most low-income people in the area it’s the only place to do banking. When he acquired the building, he pointed out, he put up actual walls around the check cashing operation and added a space heater to make customers comfortable. In his opinion, just that little attention to service can improve the quality of a block.

Jesse doesn’t have a solid timeline for the project. He is still in the very beginning of the development process and has been devoting more time to cleaning out the birds’ nests and years’ worth of trash and decay that has accumulated in the building.

At the community meeting, Lewis Colburn, a neighborhood artist, was one of the first to question Jesse about the project. He said he hoped Muñoz wasn’t going to turn the mill into an “IKEA modernist house,” which “appropriates the veneer of modernist design and uses that language, but often lacks the intellectual vigor and thought process that goes into that design. It also uses products that are cheaply made and held together by particle board and pins, so it doesn’t hold up over time.”

Later, Colburn told me that he had wanted Jesse to think about “a thoughtful approach to the existing structure by maybe using or revealing elements of that existing structure because it seems to me that would not only be more cost effective, but a little more appropriate to the area in some sense. It’s a work of architecture and is already a realized building, so rather than cover that behind a veneer, why not engage with it?”

Lewis did admit that he’s not a professional architect so he didn’t have a clear idea of the costs and labor that would be needed. His comment seemed to serve as an aesthetic suggestion. I asked Jesse if he understood what Lewis was talking about.

“Sure, I get it. He doesn’t like the IKEA cookie cutter thing. It’s like when a city person goes out to a suburb in Jersey for the first time and loves it. But then the guy next door who has lived there for 15 years says, ‘I can’t stand it, every house looks the same.’ But I have to think about who is going to want to move into this house.”
Jesse didn’t have a definitive answer about the likely tenants for the building. It may be that he’ll have to address the issue of placing residential apartments hard up against the El, a potentially difficult issue that will require a rigorous design intervention. He also admitted that he is a little weary of getting into a position where he brings all of the neighbors into the design process, and then has to please everyone. He candidly pointed out that he’s going to do what works with his time and budget. It was something I’d typically expect a developer to say. But then he completed his thought.

“At the end of the day I want to make something that people look at and say, ‘Oh my God, that’s beautiful.’ I want to create a place where the neighbor next door knows that he can cash out, sell his house for double or triple, and move out to the Northeast, but he doesn’t because he wants to live next to this building. I want the people inside the building to be able to walk right down on Front Street and instead of seeing the closed shops, they have a place to get groceries or to get their hair done. And I can do that by charging people rent in storefronts that are under market value if they make the commitment to invest in the space.”

It was a compromise of sorts that seemed worthy of Mr. Bromley.

At the EKNA meeting, residents offered their skills and expertise to both assist Jesse in his development, and guide the aesthetic of his building. Whether Jesse takes them up on it, he didn’t commit. But what he did commit to was his philosophy on how to keep the building beautiful.

“I’m going to be living in one of the units, so will my mother. And let me ask you, who better to make sure that the place is kept up and looking beautiful than the homeowners.”