A Monument To Ignorance 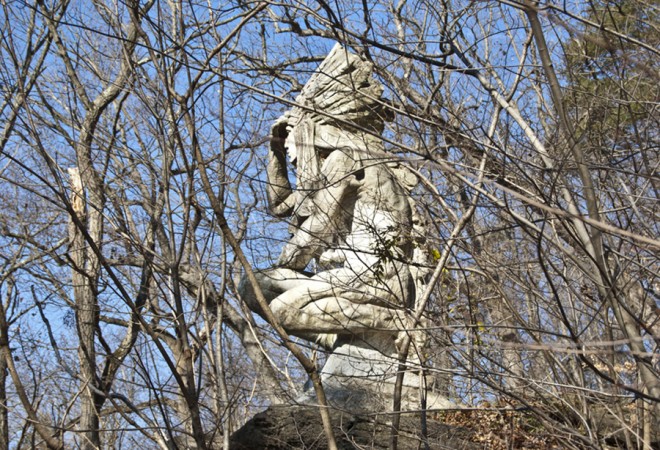 Like all great cities of a significant age, Philadelphia is adorned with markers and monuments to those long gone. The intent is to pay tribute to those who have passed, to keep them in the collective memory and honor them. So the founder of Pennsylvania gets a mammoth statue on City Hall. John Wanamaker and Stephen Girard have been recreated, larger than life and smack in the middle of town.

And for the Lenape, descendants of the original human settlers of the area, there are two monuments. The more recent is the 1995 Tamanend by the sculptor Raymond Sandoval at Front and Market Streets. The other is a marble statue by the noted sculptor John Massey Rhind of another chief, Tedyuscung, on what is imagined to be a sacred “Council Rock,” high above the Wissahickon Valley where they used to live. Or so the mythology says.

If any group deserves a monument or a memorial it is the Lenape. (The University Museum put together a terrific exhibit on the Lenape a few years ago that brought the Lenape story forward to today.) Most of their names for rivers and creeks have been replaced and are all but forgotten (and most of the creeks themselves are buried). So it does seem fitting that the monument to a people now gone stands in a beautiful natural setting still bearing a version of its original name. The word Wissahickon is believed to be a westernized version of the Lenape word Wisameckhan, which means “catfish stream.” While the new growth woods and the paved paths are a far cry from the great forests that greeted the first Europeans, they still hint at what the entire region had once been.

The Philadelphia carpenter Pat Owens and a scene painter from one of the city’s theaters were responsible for designing and installing a carved wooden statue of Teduscung on the site in 1856. “From the Germantown Telegraph I learn that the figure of Tedyuscung standing the rock was placed in position on July i8 Friday 1856 in commemoration of his visit to this spot which happened just one hundred years ago,” wrote Reverend Thomas C. Middleton in 1901. Eventually, the weather took its toll on the wooden statue and it was removed. 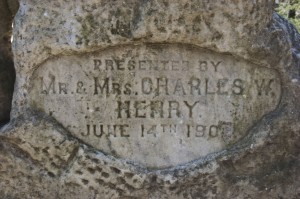 A member of the Fairmount Park Commission Charles W. Henry, whose uncle was Mayor Alexander Henry, and who descended from a wealthy old line family, decided along with his wife to replace the old wooden statue. The Henrys commissioned Rhind to create a new one out of marble. A noble and generous gesture perhaps, but as a monument to a people it fails.

There is in fact little evidence that the Lenape lived along the Wissahickon. It is believed they came there to hunt and fish but that was all. Indeed, historians have found no evidence that so called “council rock” was ever used as a gathering spot and a visit to the location reveals a rather small bluff that would hardly be a good location for a mass gathering. So why make a statue as a tribute to this particular figure? There is no reason to, and in fact, no one did. Though it replaced a monument to Tedyuscung, Rhind’s statue was never meant to portray a specific person but to represent a whole people. Nevertheless, the Tedyuscung name stuck.

The sculpture might still be a nice tribute, a great showing of admiration and respect for a displaced people. Or it would be if the figure was not wearing a very distinct Plains Indian war bonnet. There is nothing about the posture or the dress of the figure that evokes the lives of the Lenape. Worse still, there were ample paintings of Lenape that show their style and dress available to the artist. 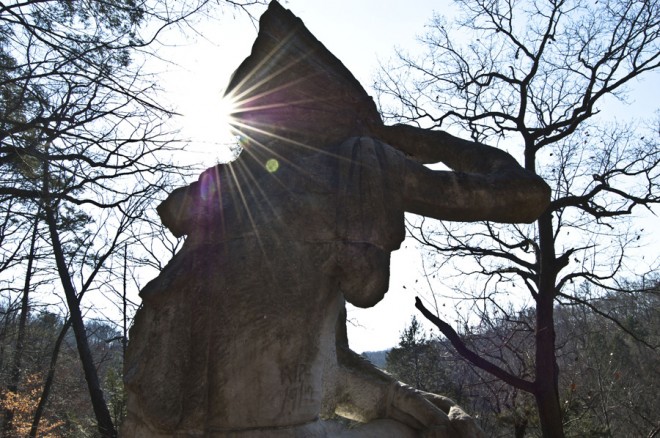 Rhind was a prolific sculptor. His sculptures decorate Gettysburg Battlefield. He created monuments in Washington, DC. His sculpture adorn Detroit’s City Hall. He is the man behind the statues of John Wanamaker and Stephen Girard.

Rhind sculpted the Corning Fountain in Hartford’s Bushnell Park, a massive tableau featuring a deer surrounded by various figures of Saukiog Indians, the first inhabitants of that region. Here, then, is our mistaken Tedyuscung peering into the distance. Rhind appears to have simply recycled one of his Saukiog as a Lenape. Unfortunately, the the Saukiog figures, too, are dressed as Plains Indians.