Editor’s Note: The lawyer Nate Emeritz moved to Philadelphia a year ago. Interested in urban space and alive to the changing streetscape, Emeritz found himself camera in hand learning his way around the city. At the same time he began studying the city’s history. He put the two things together in a photomap based on William Penn’s 1687 plan for Philadelphia, surveyed by Thomas Holme. For just about each block of that early plan, Emeritz assigned a single contemporary photograph. The project, he wrote in an e-mail, “was intended to reflect the plan, execution, and tensions in the original city area.” The result is a kind of quilt of the written city–“two miles in length and one in breadth.” This week, Hidden City caught up with Emeritz for an interview.

You moved here a year ago and, so it seems, were quickly struck by the city.

I grew up in DC and lived in New York City before moving here for work. In my brief time here, it has struck me that the best of Philadelphia’s culture thrives on creatively rooting out and developing concepts that are unappreciated or undeveloped in other cities. I see Frank Furness and Isaiah Zagar as having brilliantly embraced this approach. Philadelphia is also very conscientious of its own historical narrative, for academic and economic reasons, which has led to some great public art. The kite-and-key statue between Franklin Square and Franklin Bridge, 1970s Society Hill housing development, and seals of fire insurance companies first drove me to seek out more examples of this perspective.

You see your project as a way to deconstruct and interpret the city–through time and space. What do we learn from this kind of deconstruction? What did you learn from the project? Was this how you got to know Center City?


Yes, having to walk each block helped me get to know Center City and reduced some bias toward places I would otherwise choose to see or avoid. Having to choose one photo to represent each block forced me to think critically about themes and displays that represent something meaningful. Holme’s map and my research became a lens for viewing the city’s public art, use of public space, and amalgam of perspectives, which reflect the people, places, and ideas that the city has collectively supported. Philadelphia comprises a fascinating mix of the quaint and historic, and the brash and unapologetic. This occasionally creates a harsh dichotomy, but I appreciate it where they combine effectively, such as the old house with Zagar tiles on its side in the photo at Fourth and Pine Streets. All of these themes come together in the Liberty Bell which has left me with the question: what are the broader implications of a city that asserts as its primary symbol a defective product?

Many observers have thought about how it’s possible to read urban history through the Philadelphia Center City grid: one can take a tour and see with one’s own eyes the city develop over 300 years by walking from Front and Arch in a zig zag to 17th and Arch (for example). But you chose not to make this into a project about architectural expression but rather it seems to me about other forms of expression: art, sculpture, words, decoration, etc. Was that a conscious choice and do some of those signs and symbols resonate with the various tensions implicit in taking a 1687 plan and building on it over and over….

Yes, I gave myself broader guidelines than just architecture for a few reasons. Primarily, I was new to the city and didn’t know what I would find, so it would have been presumptuous to restrict myself. Additionally, because I am not an expert on architecture, any other artistic medium, city planning, or almost anything underlying this project, I took a looser approach to exploring, possibly understanding, and hopefully appreciating Philadelphia in any form I found it. For instance, it took a while before I really appreciated the murals that coat empty spaces around Center City. I would not have been impressed with the concept or sought out expressions of that medium before I saw how effectively and uniquely they transform many unused and deteriorating spaces into creative expressions of a variety of ideas and communities. I also did not intend to identify the “best” example of art–I tried to choose the photo that reflected something about the city that I understood and/or liked the most. Sometimes it was just playful, like the plaque on the first block east of the Schuylkill on South Street, or sneakers hanging with roast ducks in the Abacus window at Ninth and Race Streets. There were some recurrent symbols that I started to identify, such as the prominence of written documents which might contrast with modern Philadelphia’s below-average literacy rates. The sculpture on the side of the Glaxo-Smith-Kline offices in the location intended for the northwest square, which is one of my favorite photos, explicitly shows a person escaping from a mold. As for new buildings which sometimes improve the city and sometimes don’t, the Convention Center on three blocks of Arch Street is a prominent and unattractive part of the city that I prominently and unattractively included on the postermap. 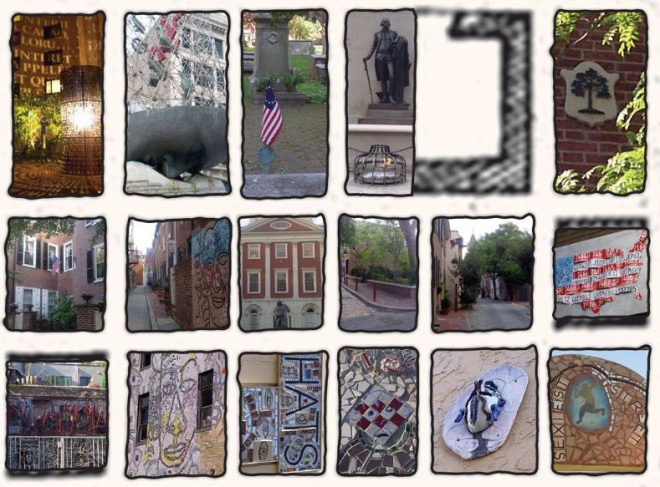 You obviously walked every block of the original city plan. Did you set out to make this project or did it develop over time?

The latter. I like to take pictures and research local history and culture when I travel to new places. This process overlapped with my frequently being lost when I moved to Philadelphia. As I walked around Center City with my camera, I tried to learn the geography by saving my pictures on a Google map. When I came across Holme’s map and some research into cultural and social developments, I realized that I could combine my practical efforts to learn the streets with my research into the history of those areas. Essentially, it gave the Google photomap an historical dimension, as well as creating an end product with a checklist of every block in the original city plan.