The Double Spire On The Church Of The Assumption? Why, Franklin, Of Course 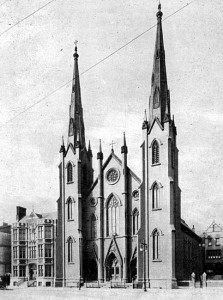 An early postcard showing the Church of the Assumption.

As I reported in a story last week, Benjamin Franklin first sought to use the tower of Christ Church for his experiment to draw an electric charge from the clouds of a thunderstorm. When the unfinished tower wasn’t suitable, Franklin rigged his kite. But where did he fly it?

Most evidence points us northwest, to the open land around Ridge Avenue and Buttonwood Street, near the site a century later–and still, at least for now–occupied by the monumental double spire Church of the Assumption.

Preservationists and neighbors have been fighting a four-year battle to save the landmark church at 1123 Spring Garden Street, a place of extraordinary significance in the development of the Catholic Church in America–Bishop John Neumann helped to consecrate the church where Katharine Mary Drexel was later baptized (both were canonized as saints). You can read Hidden City’s ongoing coverage of the intensifying situation, as the church’s owner seeks to act on a demolition permit he was granted by the City’s Department of Licenses and Inspections as soon as next Tuesday, HERE and HERE.

From a 1777 map of Philadelphia, showing Pegg’s Run (a.k.a. Cohoquinoque Creek) rather prominently; Ridge Road is the diagonal pathway in the center left.

This location for the kite experiment corresponds to the research of historian Joseph A. Leo Lemay. “Franklin had purchased a pasture [along Hickory Lane] from the brick maker William Coats,” writes Lemay. Hickory Lane ran west from Fifth Street to Ridge Avenue along what is now Fairmount Avenue (formerly Coats or Coates Street). This parcel was then in the Northern Liberties of Philadelphia, about a quarter mile north of the city’s original northern boundary (Vine Street). The area later became the Spring Garden District of Philadelphia County.

Ridge Road, an ancient Native American trail, would have provided Franklin and his son (who helped his father that day) an easy route to this secluded region outside of town. The only other pathway in that open countryside was Hickory Lane, which today is Fairmount Avenue. Nearby Spring Garden Street, now a major thoroughfare that follows the regular Philadelphia street grid, was not laid down until the early 19th century.

This telling of things is partially corroborated by a short piece written by one “Lang Syne,” appearing in Hazard’s Register of Pennsylvania, vol. 2 (Nov. 1828), at page 287. The writer states that:

Spring Garden was a kind of open common very useful to the ‘uptown boys in kite time.’ The kites while flying were often ‘pressed’ by the butcher boys from the vicinity of ‘Pegg’s Run‘.

Entitled “Reminiscences of Philadelphia,” the article is entirely unrelated to Franklin’s electric kite adventure, but it points to the likelihood of Franklin’s using a known kite flying spot for his experiment. More on Pegg’s Run, now the route of Willow Street, below.

Part of c. 1802 map showing the area, in the left center, east of Ridge Road/Avenue, where Franklin likely flew his kite.

What follows, however, lends us further evidence to connect Franklin’s experiment to the Spring Garden Street site. And, just as interestingly, it provides an explanation why the architect of the Church of the Assumption, Charles Patrick Keely, chose a double spire design.

BENJAMIN FRANKLIN’S KITE AND THE CHURCH OF THE ASSUMPTION, PHILADELPHIA.

While a fair was being held to aid building the Church of the Assumption, Philadelphia, a lithograph of the proposed edifice, by its beautiful Gothic Architecture attracted my attention. Father Carter seeing me absorbed in the picture, placed his hand kindly on my shoulder and asked: “Well my boy what do you think of that?” I replied that it was very handsome, and much superior to anything before attempted on a Catholic church in Philadelphia. “But are you not very extravagant Father” I asked “some would be content with one steeple but you are to have two?“

“Now my boy I will give you a reason, tho’ ’tis not my rule. When Benjamin Franklin went to fly his kite, he, living near Second and Race Sts. [this is apparently incorrect] directed the boy [Franklin’s grown son] to carry it [the kite] out the Ridge Road to Pegg’s Run [a creek] where there was a blacksmith shop which still remains. The great American Philosopher had a workman affix an iron point on the kite, and with the assistance of the boy raised it in the air. Having it well steadied he tied the string to a post under a shed used to tie horses while being shod, operating with the silk cord and key to convey the electric fluid to the Leyden jar and thus he bottled the lightning. The kite hovered in the air immediately above the site where the church is to be erected, but as no man can say positively the actual spot, I propose to put up two spires, so that we may say somewhere between these points, happened the most heroic act ever performed in the interests of science.”

Willow Street is directly over the bed of the creek and the walls of the blacksmith shop still stands about 50 ft. S.E. of Willow on the North East side of Ridge Ave. tho’ the building has a new front and is devoted to other uses, but every morning as I pass the beautiful church and the site of the old shed, the forms of the great American Philosopher and the relator of his great deed, the kindly great American priest, rise up in my mind. 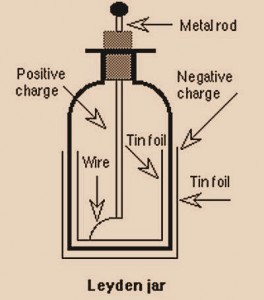 This single-page declaration was published in The American Catholic Historical Researches, vol. 13, no. 1 (Philadelphia; Jan. 1896), at page 67. Its writer, Andrew Jackson Reilly (1834-?), was a minor official working in the District Court for the City and County of Philadelphia. He was also the historian of not only the City History Society of Philadelphia, but also the Pennsylvania Historical Society and the National Catholic Society. It seems unlikely Reilly was the type to fabricate such an account.

“Father Carter” was reverend Charles Ignatius Hamilton Carter (1803-1879). Given the years of his life span, Carter surely could have learned the details of Franklin’s kite-and-key experiment from someone who was alive when it occurred and heard about it through Franklin himself or via some other contemporary.

Andrew Reilly’s 1896 account refers to Willow Street and a stream called Pegg’s Run. The intersection of Ridge Avenue and Buttonwood Street is about two blocks northwest of the westernmost part of Willow Street, a narrow roadway that follows the former course of Pegg’s Run (originally named Cohoquinoque Creek), which today is a sewer that empties into the Delaware River. Two blocks further northwest is the Church of the Assumption, occupying the ground over which Franklin’s famous kite possibly flew.

Reilly’s statement is recounted in Records of the American Catholic Historical Society of Philadelphia (September 1922), vol. 33, no. 3, at 207-208), in an article by Ella M. E. Flick on the life of Father Carter. Ms. Flick confirms that Andrew Jackson Reilly was “a young man at the time” when the fair was held–in the early or mid 1840s–to raise money to build the Church of the Assumption. Flick further says: “Father Carter’s reply is best taken word for word as Mr. Reilly gives it to us.”