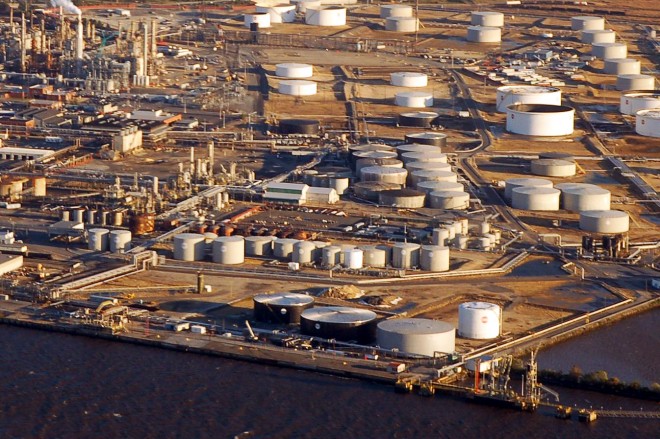 Philadelphia has its fair share of environmental hazards: large oil refineries, heavily trafficked highway corridors, waste transfer stations, and, yes, the occasional industrial facility. The city isn’t the industrial behemoth it was at the turn of the last century, but those economic legacies are still shaping the landscapes of environmental hazard in the city. They are concentrated in very particular neighborhoods within the region, a fact often overlooked when planning environmental protection policies.

Neighborhoods located closest to the river’s old industrial zones such as Bridesburg, Port Richmond, Kensington, and Fishtown, are located in the heart of the region’s hazardscape. It is largely an inherited landscape, but new infrastructure expansions along the river such as the expansion of I-95 and the deepening of the Delaware River continue to funnel more environmental hazards into an already intensely overburdened area. With the increase in auto and barge traffic along this river corridor comes a potential for adding more air pollution to already existing threats to public health.

These projects are literally cementing in place the path dependencies built into Philadelphia’s inherited landscape of environmental hazards: commercial highways and international ports abutting residential neighborhoods are unlikely to be moved. The deepening of the Delaware is in part a response to the widening of the Panama Canal, as east coast ports jockey to capture the potential redirection of international cargo traffic. While Delaware River ports aren’t likely to pull in more traffic than New York’s ocean access port, Philadelphia’s planned port expansion at Southport puts that hazardous use hard up against the burgeoning Navy Yard, where offices, retail, green space, and eventually residential uses are planned.

The Delaware River, a still heavily polluted river bordering the eastern edge of the city has defined Philadelphia’s industrial history as much as it still defines where contemporary environmental hazards are located. A recent study by Diane Sicotte, Ph.D., an environmental sociologist at Drexel University, revealed an interesting fact about this landscape: proximity to the Delaware, more than any other factor, significantly increases the likelihood that your community is extensively burdened with environmental hazards. Sicotte’s map of the region shows a solid chain of hazardous zones snaking along the western edge of the river, traveling over the bridge to Camden as it moves further south. 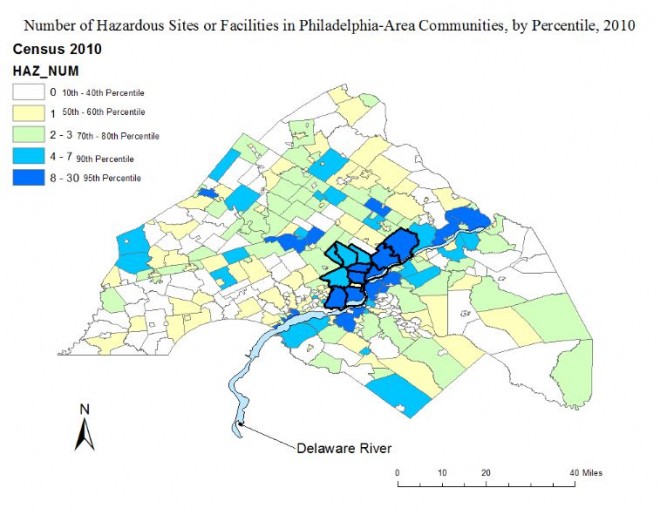 Living close to the Delaware makes you seven times more likely to live in an area with more environmental hazards than any other place in the region. An isolated sea of waste transfer stations, toxic emission releasing facilities, superfund sites, and sewage facilities are all huddled along the banks of this old industrial river.
Old bank buildings; smoldering abandoned factories; unused smokestacks; the sea of turn of the century worker housing that comprises so much of the city’s housing stock: the remaining marks of Philadelphia’s industrial history are usually found in the still visible infrastructure of a previous era. Landscapes of hazard are different. It is easy to see a large waste transfer station on your block, but it is difficult to know why it is there and why so many other hazards surround it. Sicotte’s work provides insight into the causes behind hazard concentration in Philadelphia.

Sicotte suggests that these concentrated hazardscapes are largely due to the inheritances of industrial land use. The “why” behind the overconcentration is that these places have been used for heavy industry since the middle of the last century. This legacy has funneled new polluting operations into the places of the old ones, keeping environmental hazards concentrated along the riverfront.

Perhaps it isn’t surprising that the hazardous spaces of today sit atop the hazardous spaces of yesterday, but this isn’t the case across all cities with an industrial past. Recognizing that living next to heavy industry and transportation is no longer the economic advantage it once was, other places have implemented comprehensive redevelopment plans for their sagging waterfronts, a project that the City of Philadelphia is only recently beginning to address in their own waterfront redevelopment plan.

Philadelphia, though, has kept much of the zoning and land-use patterns it has had for decades, ones that still reflect the ideal of providing worker housing close to industrial employment centers. Zoning has allowed housing to replace industry but takes great pains to prevent its reverse: allowing industry to replace housing. Factories can’t locate in a neighborhood zoned residential, but housing can be constructed in a neighborhood zoned Industrial. Old industrial zones can be used for residential land use, but any dirty new land use will always gravitate toward the old industrial areas in which the land is cheaper and low-income people live. Zoning policies such as this keeps polluting facilities located next to neighborhoods—just as they were when first developed a century ago—by preventing old industrial zones from transitioning towards residential land-uses.

Existing regulatory structures exist to monitor these hazards. Air Management Services, part of the Philadelphia Department of Public Health, for example is in charge of issuing and monitoring permits for polluting facilities within the city of Philadelphia. State agencies such as the Pennsylvania Department of Environmental Protection are charged with implementing statewide plans for meeting national ambient air quality standards. Both of these agencies monitor the hazards and reduce the pollution that exists in the city. They do not, however, have any regulatory power to influence the concentration of these hazards. Responsibility for managing concentrations of land-use lies with municipal planning agencies.

The Philadelphia 2035 district plans for the River Wards have not yet been finalized, but Philadelphia 2035 and a Health Impact Assessment for the lower south district have made headway in considering the health consequences of the built environment. Focused on walkability, mixed-use and transit-oriented development–hallmarks of a new urbanist planning paradigm–these plans address health primarily through promoting a reduction in vehicle use and an increase in active transportation. The plans also propose a general plan for site clean-up of polluted land-use in the River Wards but, again, the Planning Commission has yet to finalize the district plans.

Reducing the concentration of hazards requires policy that does not exist in Philadelphia. Mixed-use and transit-oriented development promote exercise and reduce vehicle emissions, but do not take into account the hazard risks of existing or future land-use such as waste transfer stations or industrial facilities. Sicotte’s research makes inroads towards publicizing the issue but the east coast does not have policy aimed at reducing hazard concentrations. The research also does not take into account mobile hazards such as emissions from diesel trucks or commuter vehicles. On the west coast, the California Environmental Justice Initiative is promoting the adoption of Green Zones policy, a planning tool that, among other actions, could prohibit locating polluting land-use in areas already over-burdened with environmental hazards.

Remedying these inherited landscapes of hazard concentration requires identifying spatial inequalities such as hazard concentration as real concerns for planning, and developing policy tools to match. No matter how accessible the walking or bicycle infrastructure is in the River Wards, public health in the area could be affected by continued expansion of diesel powered transportation infrastructure and other hazardous land-uses.