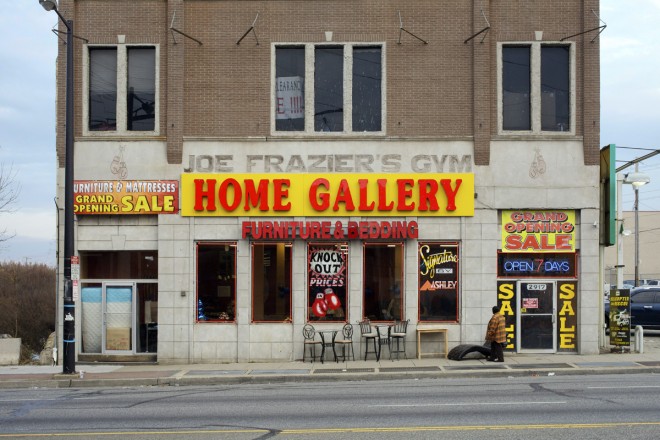 Editor’s Note: Last year, students in the architecture studio of Dennis Playdon began to advocate for the preservation of former heavyweight champion Joe Frazier’s gym, at North Broad and Greenwich Avenue, which had closed in 2008. The gym was Frazier’s school of life for young men who sought boxing—and focus, discipline, and fitness—as a way to escape the life of the street. After Frazier, who died last year, was forced to give up the gym it was turned into a furniture store and it is for sale. A diverse coalition is forming to seek protection for the neighborhood icon and find a way to use it to tell the story of late 20th century black life in Philadelphia. Hidden City caught up recently with Brent Leggs, project manager for an effort of the National Trust for Historic Preservation to preserve the gym as a “National Treasure.” Mr. Leggs is a field officer in the National Trust’s Boston Field Office, where he developed the Northeast African American Historic Places Outreach Program.

Nathaniel Popkin: We’ve seen a real evolution of preservation in terms of the types of buildings and places considered significant and a corresponding widening of the constituency that might consider itself “preservationist.” Is this a conscious policy shift amongst policy people at the national level?
Brent Leggs: Yes. Organizations are proactively re-shaping America’s collective memory by telling the full story of this nation’s history. In the 21st century, preservation is activism, and our work is cause-driven. This conscious shift to document and to help save diverse historic places is a direct reflection of the changing demographics and cultural landscape. The goal for all preservation institutions is to become and/or remain relevant.

NP: The Joe Frazier Gym is getting a push in recognition/reconsideration as Frazier’s life is reevaluated, in part through the film “When the Smoke Clears” you showed at Temple in October, in part due to the effort to commemorate Frazier with a statue and in part due to the Temple students who began the nomination process. Was there a single factor that pushed the National Trust to advocate for this building as nationally significant?
BL: After the Preservation Alliance for Greater Philadelphia selected the gym for their 2012 endangered list, the National Trust for Historic Preservation elevated it to our America’s 11 Most Endangered Places list and as a National Treasure. Although we were unsure whether the gym would resonate with traditional preservationists concerned with saving places of architectural merit, we made a conscious policy decision to include places that are unadorned, simple buildings associated to significant Americans from diverse communities. In our view, Joe Frazier was a sports legend, and he deserves a place that celebrates his legacy and his contributions to the sport of boxing. Recognizing Joe Frazier’s Gym on the local or National Register is a fitting tribute to one of the greatest athletes of all time. 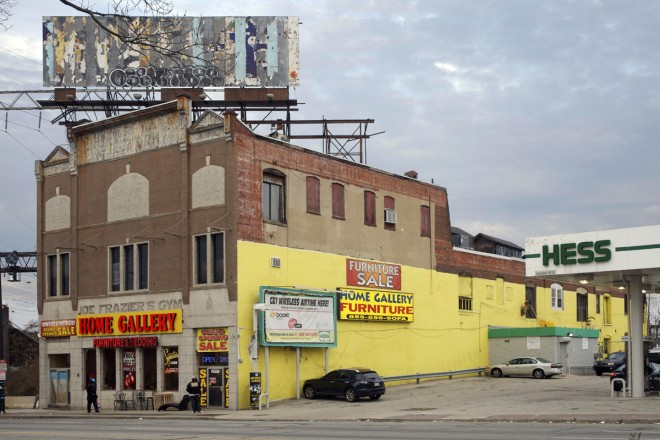 NP: The community in North Philadelphia long ago recognized the value of the gym and of Frazier himself when they helped him purchase the building to make it a “permanent” part of the community. Is that kind of groundswell of support possible now? And is it necessary to save the building?
BL: Having strong community support for saving historic places is critically important. This collaborative effort to protect and to raise awareness about the gym’s contribution to Philadelphia and American history is necessary to build local support. Presently, various institutions, such as Hidden City Philadelphia, Temple University, the Preservation Alliance for Greater Philadelphia, and the National Trust for Historic Preservation, are advocating collectively for the gym’s preservation. Historic preservation is a shared responsibility, and it requires broad support for a successful outcome.

NP: What’s the goal here? Is it protection so that the building can’t be significantly altered or destroyed? Or is it to create a meaningful symbol of what Frazier’s life represented? And how can that be determined?
BL: The goal is raise the visibility of Frazier’s legacy and to keep present his life in the public’s imagination. This can be accomplished by listing the gym in the National Register of Historic Places and as a Philadelphia landmark. Now that the building is for sale, National Register listing makes available federal historic tax credits necessary to engage a preservation-friendly buyer and to make the building’s future rehabilitation economically feasible. Local designation protects the gym from adverse alterations and demolition. The most significant character defining features on the building are three words etched in stone, Joe Frazier’s Gym. The front façade communicates that history worth saving lives there. With those words forever protected and visible, the building remains a meaningful symbol of Frazier’s life and his values. 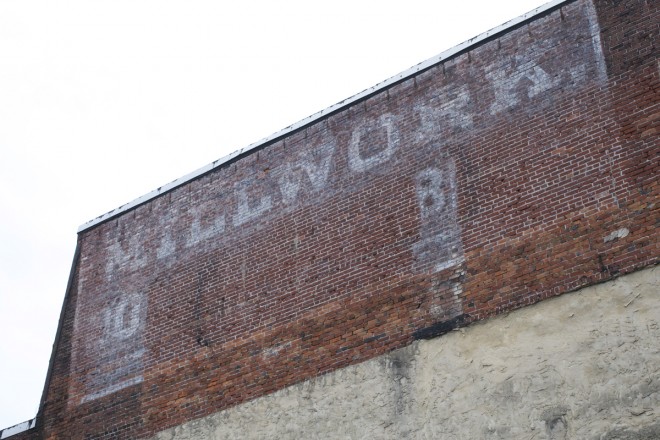 NP: Do you have a vision of what the gym could be?
BL: There are many uses for an industrial building of this size and scale in the heart of a major metropolitan city. Ideally, a new use at the gym would allow a portion of the building to become available for public consumption, making it a community asset that serves the needs of North Philadelphians. The Frazier family and long-time supporters of the gym desire to see this place repurposed for multiple uses, such as a sports facility, and as a community and learning center. We support a new use that is financially feasible, led by a professionally-managed staff capable of generating enough revenue to maintain upkeep on the building.

NP: What does it mean to “save” a building that’s had the meaningful part of it–the interior–already completely altered?
BL: When historic buildings are rehabilitated for new uses, often times the historic interiors are altered or the historic collections are removed and/or have been sold off. In particular, African-American historic places tend to be vernacular structures not exemplifying key architectural traits. Since 1619, the significant contributions of African-Americans in American history are often narratives that are more powerful than the structures and architecture we preserve. Hence, the imprint of blacks on America’s built environment in many instances is left invisible in American cities. Historic preservation works against invisibility to save African-American historic places that are irreplaceable. The building itself is the permanent exhibit, and a meaningful reminder about the African-American experience. Thankfully, the gym is well documented, allowing future opportunities to restore the historic interior. 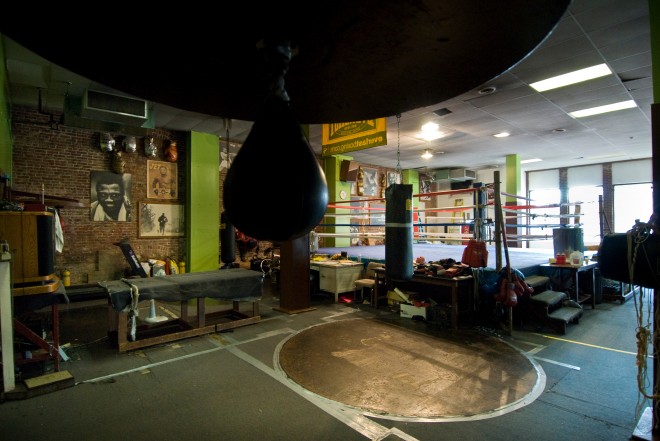 NP: What are the steps that need to be taken in order to preserve the building? Can Frazier’s legacy be preserved without the building? What are the obstacles? I presume the biggest is simply real estate economics–just this article alone is probably driving up the asking price of the building–but who in your mind would purchase it? Is there a useful model from another place?
BL: Preserving the building can take many forms, from simply documenting and designating the gym, to developing a master plan for its rehabilitation. Rehabilitation first requires a preservation-friendly developer, with a financially-feasible vision and the resources necessary to get the project off the ground. A master preservation plan needs to be prepared to protect important architectural and historical elements in the building. If the vision is to make the building accessible to the public, it’s likely that a consortium of institutional partners is essential to take a vision through a community planning and development process.

Obstacles are numerous for most real estate projects, and preservation work is no different. Unlike most preservation projects driven by a grassroots organization or more formally by established institutions, there are no agencies yet able to acquire, plan for, and operate the gym. The best-case scenario is having a credible real estate developer to purchase the site, working with local preservation organizations like the Preservation Alliance to develop a community-based plan and the Pennsylvania Historical and Museum Commission to attain federal historic tax credits.

NP: Between the gym and the John Coltrane house, Philadelphia has two serious sites of African-American cultural history in danger. Do you think it would be valuable to talk about and advocate for them together? Is there strength in numbers?
BL: Historic resources are vulnerable for many different reasons, such as disinvestment, not having a financially-sustainable vision, demolition, development threats, and more. Thus, I’ll add the Marion Anderson Residence and the Paul Robeson House to your list. Joe Frazier, John Coltrane, Marion Anderson, and Paul Robeson are iconic names in history, having strong international and national name recognition. Advocacy of these 20th century sites should work in tandem to build recognition for them and to engage the public in their preservation. Our mantra is that we are stronger as a collection of historic places, working collectively to advance our projects and to save African-American history. There is strength in numbers. In the spirit of an African proverb, it takes a village to protect diverse historic places.