In Logan Square, Pick Of The Lock-Ups 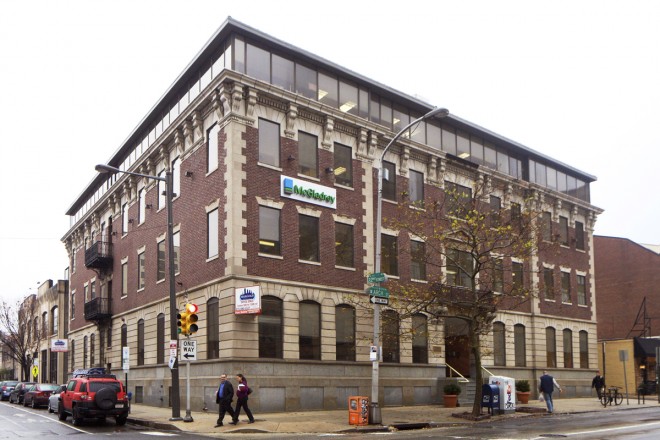 In America’s first century, government treated juvenile offenders more-or-less equally to adults. Though separate prison facilities for children existed in Philadelphia since 1826 (the House of Refuge at Ridge and Fairmount Avenues, which later moved to Glen Mills, Pennsylvania), children would await trial in jails alongside hardened adult criminals, sometimes for six months or more.

Victorian reformers were mostly ignored until 1903, when the General Assembly of Pennsylvania approved an act signed by Governor Pennypacker “Regulating the confinement of children under 16 years, awaiting trial.”

Immediately, officials began planning a building to be both juvenile court and house of detention and over the next five years engaged in heated debates over the location, size, and configuration of this new building, to be the first of its kind in the nation. Juvenile offenders, in the meantime as negotiations wore on, would be held for trial in a dedicated section of City Hall, then the Almshouse, and finally a rented space at the southeast corner of 15th and Arch Streets.

The choice of location was easiest of all for the ward heeling members of the Republican Machine, already in power for 30 of what would become 80 solid years of rule. During the mayoral terms of Ashbridge, Weaver, and Reyburn, the vast majority of new municipal services and public works were directed to the wards and divisions–many of them in South Philly–that consistently turned out the Republican vote (even property taxes were kept proportionally lower in these wards than the rest of the city). Here, in the first decade of the 20th century, Repubican-fed contractors built parks, police and fire stations, and schools.

So where to build a youth jail? The area with lowest proportional number of Republican voters: the 10th Ward, now the Logan Square neighborhood. Many interpreted the decision as political punishment for the Democratic slag heap (which would be largely erased–imagine the back room banter–by the construction of the Parkway).

The city paid $42,957.12 for six contiguous properties at the northeast corner of 22nd and Arch and had city architect (and Machine buddy) Phillip H. Johnson design an ultra-modern Juvenile Court and House of Detention.

But Johnson’s six-story design was seen as too tall and the vertical design as inefficient. Since no funding was available for construction and the building would be delayed anyway, Johnson was sent back to his work table to fashion a shorter redesign.

His response: a squat but rather enlightened three and a half story 90 foot tall French Renaissance mega-fortress. The building would have access to sunlight on all sides and a 30′ by 31′ courtyard in the middle. The facade was a melange of brick, limestone and marble. The interior included a well-appointed lobby with marble floors and wainscoting. This 52,780 square foot fireproof monster would be equipped with all the latest amenities like electric washing machines and a gymnasium. After being approved for a $200,000 budget, Sax & Abbott Construction Company was contracted to hastily build the structure.

By the time the doors opened toward the end of 1908, many thought it was the finest municipal building in the city…an extraordinary perception, as City Hall had just finished seven years earlier. One clue to the admiration, especially considering the cash hole at Broad and Market: the cost of construction, furnishing, and design of the House of Detention came to a total of $164,408.50, well under budget. 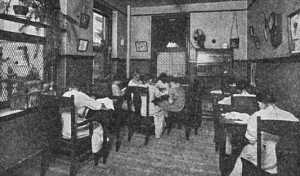 And it was a building imbued with the progressivism that otherwise seems to have missed Philadelphia. Child-offenders entered the building through the back door, be registered in the receiving room, then sent to the house doctor for a physical examination. After that, they were stripped down, bathed, and clothed in clean jail-issue wear before being assigned a dormitory on the second or third floor. While at the facility, the focus was less on punishment and more on rehabilitation and the prevention of future crime. Trials were held in the Juvenile Court on the first floor.

The building’s House of Detention continued in this fashion until May 12, 1952, when the Youth Study Center opened its unfortunate doors on the Ben Franklin Parkway. While Juvenile Court and the office of the Juvenile Division stayed at 2133 Arch Street, the upper floors were converted into the city’s Womens’ Misdeanor Division. The small fourth floor space, which had been used to house some members of the House of Detention’s staff, was boarded up and left unused. At the same time, this neighborhood, now known as the “Triangle,” was eyed for demolition in favor of a future redevelopment project that never happened. 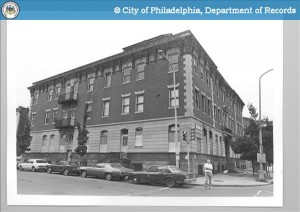 Over the next few decades, the upper floors of the building went into a cycle of use and abandonment. Most notably, a small law school that was connected to the US military rented the space in the early 1970s. In the early 1980s, the building’s interior had begun falling apart, but the exterior was still strong, albeit graffiti-covered. By the time the Juvenile Division finally moved out in February 1983, the neighborhood, now re-named Logan South by realtors, was gentrifying rapidly. A new debate about the building started–should its redevelopment be residential or commercial? 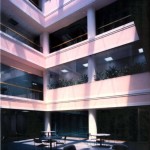 The atrium of Mulberry Atrium | Souce: P & A Associates

Designs for both were drawn up by Hans P. Stein architects. In the end, the building’s owner, dentist-turned developer Richard Evans, decided to convert it to Class A office space. The new design included an elevator and a skylight over the old courtyard. In a bold move, the old caged-in rooftop basketball courts were removed and the small fourth floor was extended out to the edges of the structure, creating a sunlit open-ended space. A small glass-covered addition was tacked onto the northern end. The $1.269 million conversion on what was to be known as Mulberry Atrium after the original name for Arch Street was completed in 1986. An adjacent parking garage was planned, but never approved.

Despite the thoughtful renovation, by 1997, the building was only 50 percent occupied. P & A Associates, developer of the St. James on Washington Square among many other projects, bought Mulberry Atrium for $775,000 and filled it by 2002 before flipping it. Recently, the old lock-up sold for $2.5 million