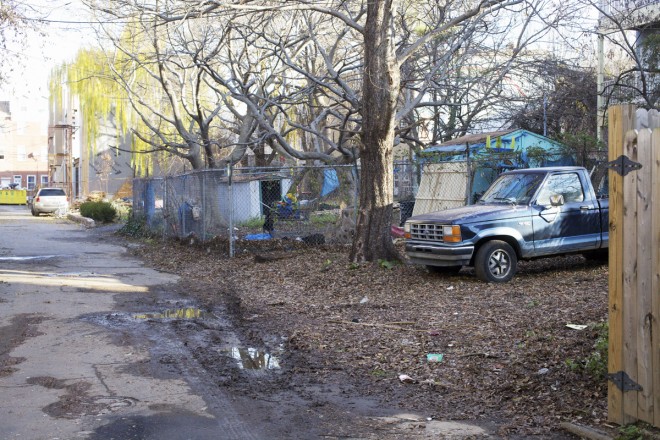 Laid out in 1869, the 800 block of tiny North Opal Street in Fairmount was given generous eight foot sidewalks. Since then a house was built over the sidewalk at the southern end of the block and the western sidewalk disappeared beneath walled-off backyards and concrete driveways.

Looking up from the south end now, the encroachments from the houses on North Uber and North 20th, on either side of Opal, appear integral to the architecture of the street.

This sense of permanence is perhaps why residents there were surprised to receive notices issued in August by the Streets Department that their backyards were not in compliance with the street plan. Building owners were told they must vacate the sidewalk. Now potentially facing fines, residents are seeking either exemption from the rule or recourse.

No one lives on this block of Opal.

Of the 22 vacant parcels with an Opal Street address, most are owned by city agencies and the Philadelphia Redevelopment Authority. None of the properties, whether privately or publicly owned, are yet in compliance with the right-of-way if they had not been so before.

And some of them comprise Ogden Park, created and maintained by local residents. Under the ruling, portions of the park would have to be removed. 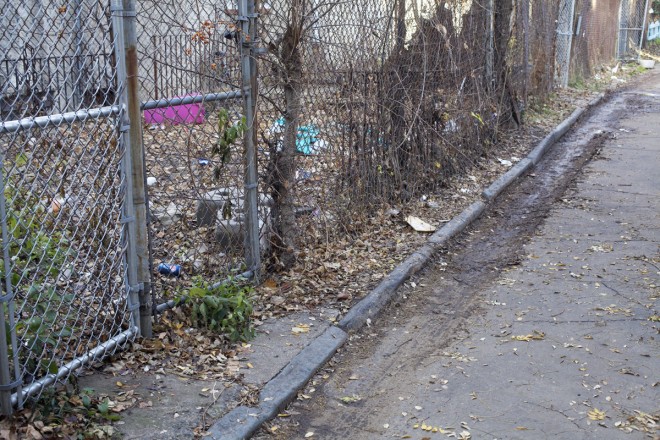 Backyard fences encroaching on the western side of Opal Street | Photo: Peter Woodall

A Streets Department spokesperson, Kiesha McCarty-Skelton, stated in an e-mail that the enforcement is a response to complaints received by the department. She added that “all property owners received the same warning.” But neighbors were given no clear deadline for removing encroachments. Moreover, there have been no signs of city workers sent out to clear the sidewalks in front of city owned land.

This has given residents the impression that the city is arbitrarily enforcing the century old code. They are hesitant to move forward with dismantling their backyards until they see some effort on the part of the city-owned properties.

The Streets Department spokesperson declined to clarify the source of the complaint that triggered the enforcement of the 1869 street plan, but Opal Street property owner Doug Young noted how the warnings coincided with the sale and development of three lots on the street’s eastern side. Other property owners do not see any connection between the warnings and development. 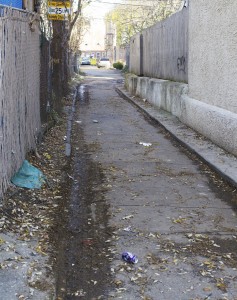 Looking north from the south end of Opal St. The house in the foreground at right was built on top of the sidewalk.

Young, whose backyard faces Opal, fought for an exemption through an ordinance of council, which was the course of action recommended to him by the Streets Department. This amounted to a letter sent to his city councilperson, Darrell Clarke, requesting that the right-of-way not be enforced for the entire block.

Later, says Young, another Streets Department official visiting the the block told him that there is a chance he could exempt his own property but not remove the public right-of-way.

Another property owner, Drew Kondylas, also noted that city officials have given contradictory responses. “I’ve talked to several people in the Streets Department and each has given me a different answer,” he says.

One impression residents share is that they’re unlikely to receive permission for their encroachments. They also feel they have been left without recourse for having purchased properties they thought were legally compliant.

McCarty-Skelton counters that “if a person builds illegally there is no time frame whereby the construction is declared legal by virtue of its existence.” So regardless of how long the city has ignored the street plan, property owners are now expected to abide the right-of-way.

For many, this will mean demolishing retaining walls and relocating fences. But just as hard to swallow is the loss of Ogden Park, which extends on both sides of Opal, between 20th and Uber. Kondylas, who formed the non-profit Friends of Ogden Park, is trying to get the city to consolidate the publicly owned parcels that comprise the park and permanently transfer them to the Department of Parks and Recreation. But if the right-of-way is enforced the park could lose several feet of green space on both sides of Opal. 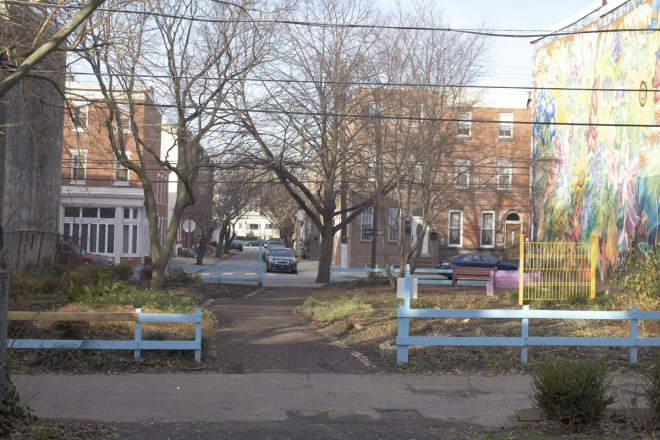 Prior to its recent improvements, says Kondylas, “Ogden Park was home to drugs and prostitution and not much else. Today there is a beautiful garden cultivated by a landscape architect, a picnic table, and there are barbeques almost every weekend in the summer.”

More than three months after the August notices were delivered, it remains to be seen whether this public amenity will survive the city’s sudden desire to reclaim the public right-of-way.