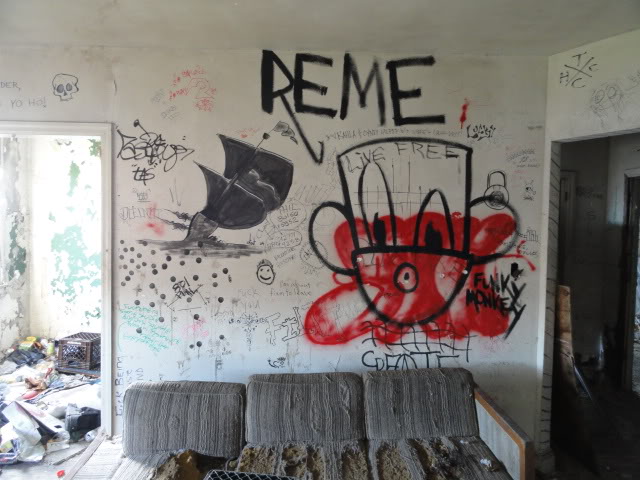 Editor’s Note: The real estate development firm Orens Brothers has begun renovation on the massive “E” shaped, 127 unit Croyden apartment building in West Philadelphia. The story that follows, written by Ethan Wallace with photographs by Shadowbat, isn’t about that project. Nor is it about the building’s history. Rather, Wallace tell another story, one most often hidden from the general view, of the building’s transformation into a massive squat called Paradise City.

Built in the early 20th century, the eight story apartment building the Croyden, with its two four story north and south wings, is mostly indistinguishable from other mid-rise Philadelphia apartment buildings of the same vintage. For about a century, people moved in, moved out, lived out their private dramas and personal triumphs without fanfare or public notoriety. The place was so anonymous that no two sources can agree on a date of construction, no architect’s name has been determined, and even the date of its closure seems forgotten. 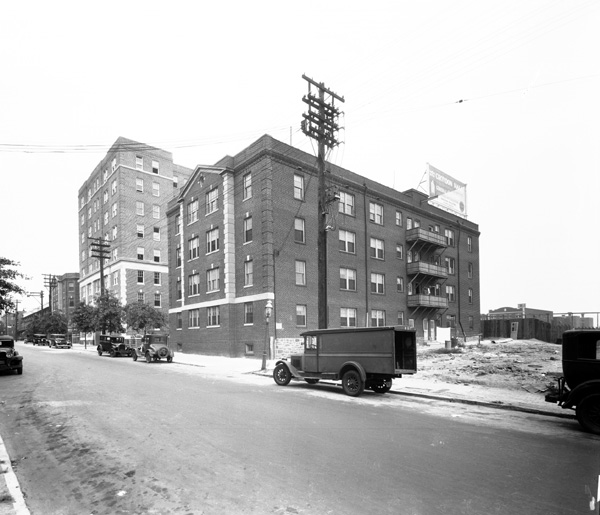 But sometime in the late 1990s, the last tenants moved on and the Croydon’s doors were closed and locked. For the Croydon, it was then that things got interesting.

Low cost housing and two major universities has made West Philly a hot spot for counter culture and radical politics. The periphery of University City has a long history of squat houses–houses abandoned, ignored, or neglected by their owners taken over by those in need of a home. 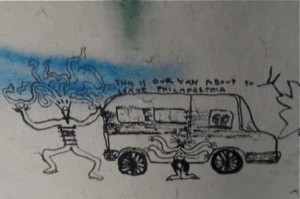 Often the squatters have been welcomed by the community, cleaning up trash strewn dumps, repairing and painting the crumbling infrastructure, tending long neglected yards and gardens. The more noble and organized groups have sought to cooperate with the neighborhood at large, wanting to keep a low profile seeing as their activities, positive or not, were still illegal. And there has always been a tendency to siphon off gas, electricity, and water. In most cases, these squats have been single houses or row homes taken over by a small cooperative group.

That was until the Croyden closed. In the ensuing year it would become a squat known as Paradise City.

With more than 120 apartments available, word went out on various underground networks from Philadelphia across the country. Starting then, someone was always home at the Croydon–but this was not a single group restoring an old house to live free and outside the system. This was a destination for any and all who knew of it and could find their way in. Wandering the ragged hallways it was not uncommon to pass several empty apartments only to come upon a well locked door, an extension cord from some mysterious electrical source stretched underneath. This was the sign of a more permanent resident. 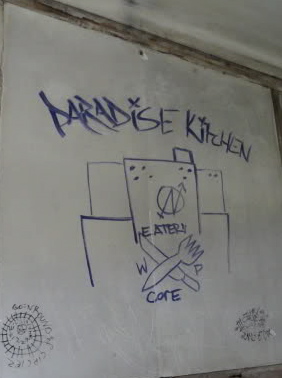 But more common were the crash rooms usually found on the upper floors. Debris strewn, furnished with old mattresses, salvaged couches and chairs, these became communal rooms for travelers just passing through. A legacy of visitors could be read on the walls. Names, dates, radical political slogans, graffiti tags, artwork, and the crew logos for a new breed of hobo adorned just about every bit of wall space.

Heirs to an American hobo tradition and as poorly understood by society around them about as their ancestors from the 1920s and 1930s, they came to Paradise City from across the US. Many were educated and from middle class backgrounds, choosing this way of life, others fleeing bad situations back home, or looking for something better than what they’ve known. Many spent their days scrounging in dumpsters or panhandling change. The hobo life can be defined by tremendous freedom and fun, but life on the fringes carries the potential for things to go wrong very quickly. Drinking is a popular way to kill time among this crowd, but hard drugs are too. Run-ins with the police who label them gutter punks, crusties, anarcho-punks, train hoppers, and scumfucks are constant.

One room in Paradise City was a dump, a reeking zone of garbage, 90 percent of it empty liquor bottles. Across the hall was an original oil painting glued to the door. One floor below an apartment that had been turned into an open toilet. The stench was overpowering.

The sound of people moving around the stripped building was a constant reminder that you were not alone–and that you had no idea who was lurking around. And yet, despite the sound of movement, you might never see a soul. Some people didn’t want to be found. 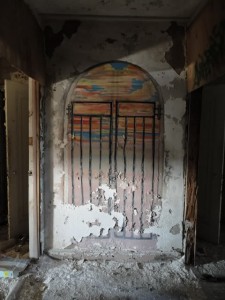 Others were fairly quick to come to you, curious about who had entered their realm. Many had dogs–companions, weapons, alarm systems on paws. I sat with them on the roof with its extraordinary view of Center City, exchanging accounts of abandoned buildings and photography for tales of police brutality, freight hopping, and jail. I never felt threatened, but I never went alone, and while I did not go out of my way to flaunt my camera gear, I did always make a point of having a large Maglite close at hand.

While my experiences with the residents of Paradise City were always peaceful and friendly and often fun, violence always seemed possible. And in June, 2007 a squatter named Tim Bradly was beaten to death on the roof where we so often sat. Another traveler named Conor McCarthy was eventually arrested and convicted of beating Tim to death, smashing his head with a cinderblock.

The police cleared the building. It would be sealed again and again, only to be reopened each time. The building became more run down, gradually becoming covered in graffiti. Neighbors just wanted to be rid of it. And it appears now with renovations beginning, they are getting their wish.