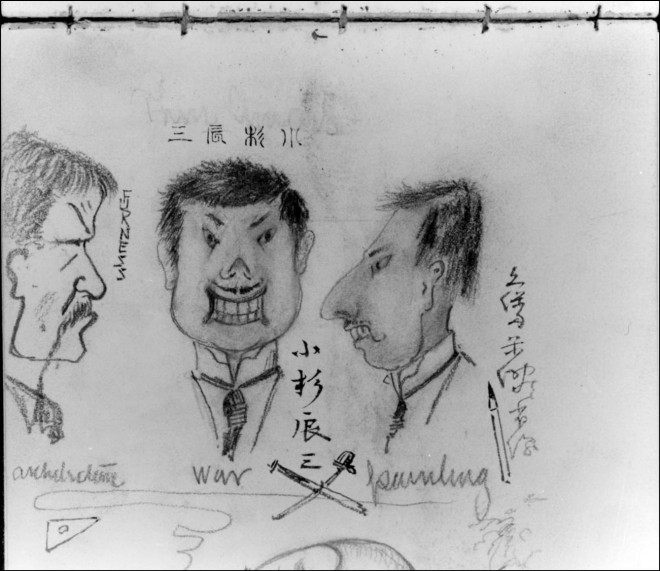 Frank Furness drawing of himself, Lt. Kosugi, and the painter Kubota Beisen, 1893

Editor’s Note: We asked Michael J. Lewis, one of the foremost scholars on the life and work of Frank Furness, to provide us with an unusual story about Furness’s life. He’s responded with this, about Furness’s relationship with the Japanese painter Kubota Beisen. Lewis is the curator of “Face and Form: The Art an Caricature of Frank Furness,” which opens at the Athenaeum on November 30 as part of the symposium, “Frank Furness: His City, His World.”

From the time he was a student, Frank Furness was famous for his caricatures, where he showed a distinct talent for turning a portrait into an insult. There was no idiosyncrasy of nose, mouth, eyes, or ears that he could not distort to malicious comic effect, and no one was spared, neither friends nor family, and certainly not his clients. But one caricature stands out by virtue of its unusual subject matter: a triple portrait of Furness and two Japanese men, each labeled by his profession: Architecture, War and Painting.

Furness is at the left, scowling and squinting, with a profile as sharply angular as any of his banks. Next to him, facing forward, is a grinning man with exaggeratedly slanted eyes, his signature revealing him to be Lieutenant Kosugi of the Japanese Imperial Navy. His face is darkly tinted, as is that of the man on the right, who is given an oversized nose. His signature, before it squiggles away into gibberish, reveals him to be the real subject of the painting: the Japanese painter Kubota Beisen (1852-1906). This whimsical image is our principal document of the oddest cultural encounter in Furness’s life.

Kubota Beisen was the artist/correspondent of a Tokyo newspaper, who came to Chicago in 1893 to cover the Columbian Exhibition. That exhibition did much to introduce America to Japanese culture; Frank Lloyd Wright, who studied the Japanese pavilion known as the Ho-o-den, was only one of many to be transformed by the encounter. Strangely enough, Beisen’s influence was felt most strongly in Philadelphia. During his time at the fair, he met a few of the city’s young artists, including Robert Henri, who invited him to lecture at the Pennsylvania Academy of the Fine Arts. That lecture took place on October 13, 1893, and it had an electrifying effect. John Sloan, for example, changed his technique overnight; years later he recalled how he immediately “began drawing in a flat, sort of Japanese black and white style.” Henri likewise changed his drawing habits.

But Furness had met Beisen well before the lecture. By October 4 he already had work by Beisen in his new office atop the Provident Life & Trust building and was inviting friends to inspect it. One who did was Cornelius Weygandt, the banker who was a family friend, who found Beisen’s work “wonderful & pretty and free. They are paintings, in India Ink & water color, off hand, and done in a short time, on a thin fabric.” Another who did was Frank Thompson, the vice president of the Pennsylvania Railroad (and later its president). So much time did the three men spent that the Philadelphia Inquirer could speak of Furness and Thompson’s “friendship” with Beisen. (This was as late as December 13, 1896, on the occasion of a gift by Beisen to the Academy). 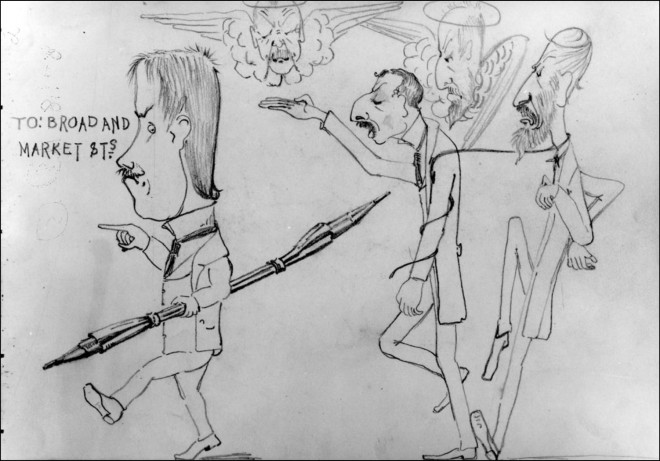 Furness and directors of the Pennsylvania Railroad, drawing from 1892

There is no mystery as to why Furness latched so enthusiastically onto Beisen; after all, he had been fascinated by Japanese art for decades. In an 1878 article he praised the bold economy of line in the drawings on Japanese fans: “It is action that so fascinates us in the designs of the Japanese.” In 1881, he designed and built eighteen “so-called Japanese cars” for the Reading Railroad (alas, no image survives). But until the appearance of Beisen, he only knew Japanese art second hand and he would not have met an actual Japanese artist. Now he took full advantage of the situation. He spent as much time as possible with Beisen, riding with him to Fairmount Park and to the Philadelphia Zoo, where they showed one another how they drew various animals.

In exchange for his hospitality, Furness seems to have extracted a pleasant quid pro quo, and asked Beisen to make decorative paintings in the Furness house at 711 Locust Street. So I was told by Furness’s granddaughter when researching my 2001 biography of Furness. In the family anecdote, Furness’s wife Fannie come into the house was startled to find the painter atop a ladder in the family parlor, decking it out with vines and butterflies. Family tradition is always to be taken with a grain of salt–one legend had the meeting with Beisen taking place at the Centennial in 1876, an error I repeated in my book–but one part of it rings true, that Fannie was unable to communicate with Beisen. In fact, the painter spoke no English, and was therefore accompanied in Philadelphia by Lieutenant Kosugi, who acted as his translator. (Perhaps he was involved in discrete intelligence gathering as well; it is otherwise odd for a naval officer to serve as aide to a representative of a private newspaper).

Furness’s caricature gives a sense of the lively if awkward exchange of ideas that took place with Kosugi as interlocutor. Of course, modern sensibilities become nervous when it comes to the representation of ethnic difference but Furness’s generation had no such inhibitions. Nor did his Japanese counterparts, who cheerfully added their signatures and the tools of their trades, a scroll and sword in the case of Kosugi and a pen for Beisen. Perhaps it was at this point that Furness realized that the three portraits formed an international allegory of three professions, at which point he added the words Architecture, War and Painting (and an architect’s triangle as his own device). A former military man himself, and one who had done a good deal of painting, Furness called attention to those areas of expertise on which the three men could overcome their national barriers and speak in terms of shared professional experience. 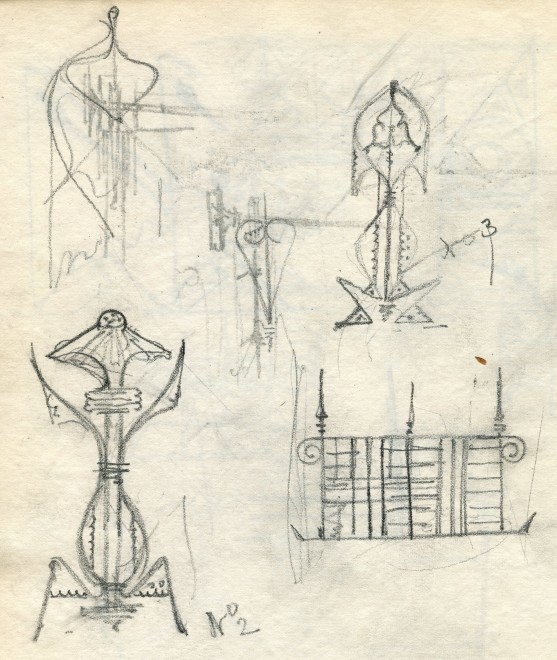 From a 1876 Furness sketchbook

One should look again at the three faces. Furness’s self-portrait is perfunctory, and it is simply a rote image that he could reproduce at will, often inserting it into letters as a humorous signature. The Japanese figures are much more labored, and much more interesting. It may be that Furness was struggling to capture facial features for which he had no conventional artistic solutions. Or is it possible that they were drawn by Kosugi himself, in his own playful paraphrase of the Furness method? Whatever the case, one gets here a fleeting sense of what this month-long moment of cross-cultural contact must have felt like to Furness, a contact marked by intense curiosity, considerable good will, and–to judge by his somewhat shambling caricature–a great deal of hilarious mutual incomprehension.

Michael J. Lewis Michael J. Lewis teaches at Williams College, Massachusetts, where he is Faison-Pierson-Stoddard Professor of Art. He writes on art and culture for a variety of publications, and his books include Frank Furness: Architecture and the Violent Mind (W. W. Norton, 2001) and American Art and Architecture (Thames and Hudson, 2006).