Vision And Subversion, Above And Below 13th Street 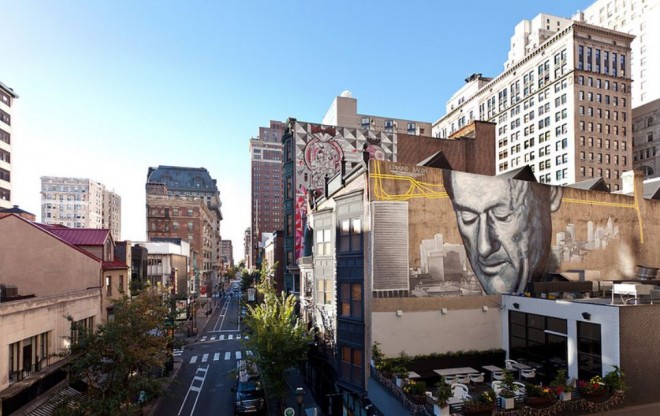 Editor’s Note: The street artist Gaia was commissioned recently by the Mural Arts Project to create the fourth mural in a series funded by the late real estate developer Tony Goldman (for our story on the first three murals in the series, click HERE). For the mural, which hovers over the intersection of 13th and Drury Streets, he chose to portray a pensive Ed Bacon, perhaps reflecting on his impact on the city. But our story only starts there, as we reveal in this interview with Gaia by our creative director Lee Tusman. While he was at work on the Bacon mural, Gaia executed a second, this one unsanctioned and subversive, on the ground floor of the Hale Building around the corner.

Lee Tusman: Clearly, with your “legacy” series, you have an interest in creating works that relate to famous architects and planners. Your new mural in Center City commemorates the urban planner and architect Edmund Bacon. In your artist statement you note that the mural “remembers a great, visionary civil servant and respects the complexity of his legacy without imposing judgment in an area of the city he had an enormous impact on.” How does your mural reflect that complex legacy?
Gaia: The mural in Center City is a portrait of Edmund Bacon, most remembered by the general public as the cantankerous personality featured in the film “My Architect” and the feisty old man who skated Love Park in protest of skateboarding restrictions. It also seems that his son’s name is almost always affixed to any casual biography of this tremendous urban planner.

I chose to paint a portrait of Bacon on his last day in office as captured by the Philadelphia Inquirer. He is flanked by models of Penn Center and Society Hill respectively with the design of the Vine Street expressway pulled from his seminal text The Design of Cities intersecting the composition of the wall. I think that remembering Bacon in Center City required a piece that was not as explicit in my past legacy works, but was instead simple in its repose and equipped with visual clues. Nevertheless, Bacon, among a host of other powerful men in his generation, brought Philadelphia to the modern age to meet the immense challenges facing every city in the United States after the war. 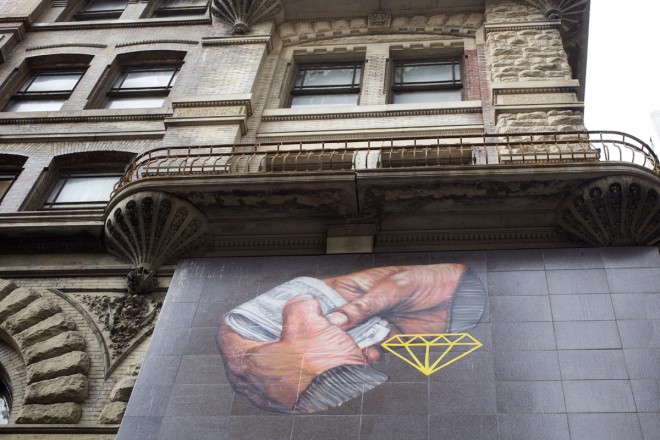 Gaia mural, Juniper and Chestnut Sts. The mural is about 20 feet off the ground. | Photo: Hidden City Daily

LT: Can you tell us a little about the Chestnut Street wheatpaste with the bankroll and diamond on the Hale building near Sansom and Juniper you quietly produced while working on the Bacon mural, and which we have a fine view of from our Hidden City office?
G: Market East has struggled to maintain a middle class clientele since its supposed demise in the 1970s after efforts to resuscitate the area by the business and urban planning elite never recovered suburbanites. In fact, such physical interventions that resulted in the Gimbels flagship store in Gallery One, the squat Girard Square building and the Independence Mall Urban Renewal project, have completely neutered Market Street of its former department store glory. The tide of capital has spoken and a poorer customer base and its attendant establishments have responded, much to the chagrin of greater Philadelphia. The hand with the money was applied on a famously vacant bathhouse that is currently sheathed with a funny marble retrofit. The diamond and the brown skin counting money is meant to honor the diverse people that currently patronize Market East; a people that would be immediately shooed to another part of town if only the “right” anchor store or development could be enticed to the divested area.

LT: Many street artists, including yourself, that were originally working purely “street” received notoriety through Wooster Collective and similar websites, then turned their work into a career by getting commissions from non-profits, largely funded through government and foundations, inherently conservative institutions. There are dozens of examples of potential conflicts, including the commission of Blu to do a mural for MOCA’s Art In The Streets that the artist claims was censored. How do you maintain independence within these commissioned projects, such as with Mural Arts?
G: I think you would actually be hard pressed to find artists nowadays practicing so called “street art” that didn’t also entertain other venues for their artwork besides the “street.” Especially in my case, because of forbears in the street, success and attention came relatively easily on the internet, so opportunities to exhibit my work followed shortly after putting up my first posters in New York. So displaying work inside and out were never exclusive of one another, although they obviously function very differently.

A majority of the murals that are currently being produced and lauded as a new muralism are actually predominantly produced in Europe and Latin America. Privately funded and non-profit oriented mural projects have begun to spring up independently through the United States now that the model has proved not only replicable, but very attention grabbing. Of course, depending on where the money comes from, the artist is subject to the agenda of largesse. Private developers are even recognizing the placemaking potential of street art for their properties. On top of this, the American audience does not generally have much of a stomach for truly provocative art. Murals can transcend the constraints of beautification and have the potential to be a cathartic process where difficult conversations are represented back to the public sphere. But all too often this psychological release is truncated at the planning stages and is transformed into something else by the curator, the benefactor, or community councils and boards. This is why illegal streetart is still pertinent.

Independence relies solely on the courage of the organizer or the program and each city must be considered accordingly. The muralist must be adaptable and understand how to frame the conversation in the right light.

LT: As you receive more of these commissions, do you still consider yourself a street artist, or maybe more accurately, how do you maintain street cred?
G: I am still not finished with the streets, so I still consider myself a street artist. I still operate indoors primarily to fund the projects that I would like to manifest outside, so it would be unfair to call me anything else at the moment. Illegal street work is still an important part of my process and is something that I promulgate wherever I speak. The maintenance of street credibility operates on so many intricate levels. Whose integrity would I like to maintain? The cornerboys in the neighborhoods I get up in? The virtual observers on the various blogs that cater to new street art? Graffiti writers? Collectors? Photographers? I put up my work in as respectful a manner as possible and pray that everything goes swimmingly from there.

LT: What excites you about the urban environment of Philadelphia? Do you have plans for future projects here?
G: I love how Philadelphia is the perfect mixture of Baltimore and New York. There is still plenty of vacant, inert space to be worked with in Philadelphia and the street culture of the city is just so damn Jacobsian. My mother used to live on Christian Streeso I got up there more often from bmore, but now who knows, things always pop up and I do love philly.