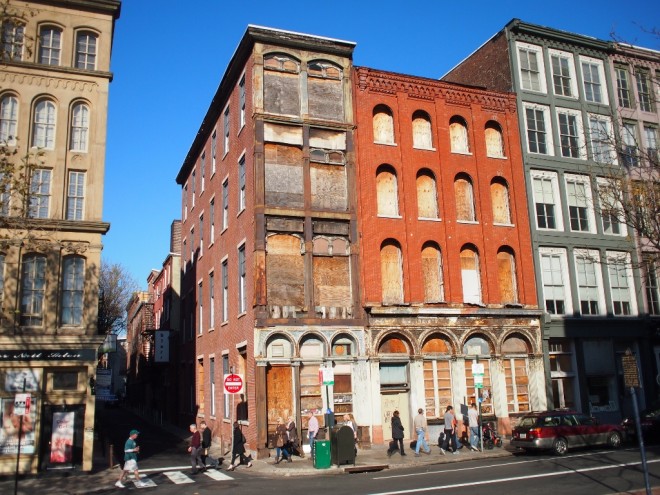 These two tax delinquent, historically certified buildings at Chestnut and Bank Streets on Banker’s Row in Old City have been in development limbo since about 2008, when partial renovation was begun. But since then, when the Bank Street wall was renovated and new windows installed, there has been no construction activity. The buildings are owned by 223-27 Chestnut Street LP, a holding of the Northern Liberties-based real estate developer Silica Investments, which went belly-up post boom. Attempts to reach the owners have failed. 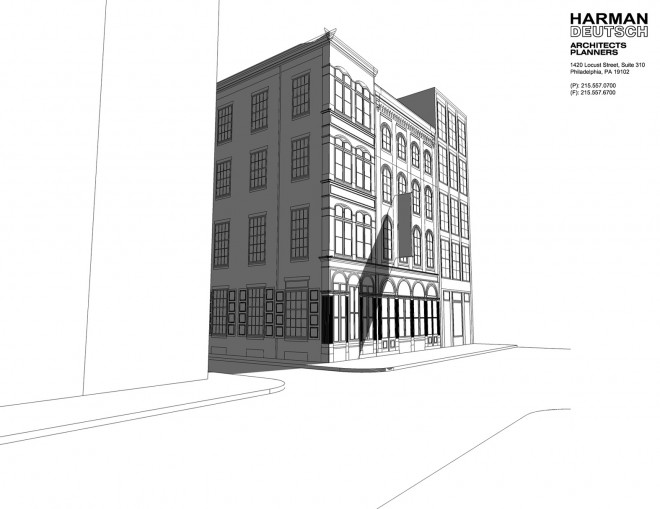 “This continues to be a serious mess,” says Richard Thom, chair of the development committee of the Old City Civic Association, who has been involved in the process of developing the building on and off for a decade and a half. “The OCCA has not heard from anyone [involved in the project] for over two years.” Thom says the Old City District has also attempted to be in touch with the building’s owners. 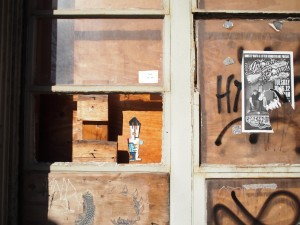 None of this would matter quite so much if the building weren’t smack in the middle of touristlandia. Indeed, it’s directly across the street from what might someday be the Museum of the American Revolution. But sadly, it isn’t the only key spot in Old City that is underdeveloped. In the 200 unit block between Chestnut and Market, what should be a real estate gold mine, there is a strikingly large handful of empty lots and vacant buildings.

But, oh that handsome corner of Bank and Chestnut! The two buildings were constructed sometime between 1851 and 1872. By 1875, 227 was serving as the Consulate of the German Empire. At the same time, 223-25 held the Meyer & Dickinson import company. The “Meyer” in that company’s name referred to Charles H. Meyer, the German Consul who worked next door.

Charles H. Meyer was the first Consul appointed after the consolidation of the German Empire and was one of the pioneers of the German Hospital of Philadelphia (later Lakeneau Hospital). Meyer & Dickinson imported something called Mateless Cloth, a combination of silk, cotton, and wool. In its day, this caused confusion when it came to what rate of duty should be charged for this material, since silk and wool carried two different rates. This controversy led to a landmark court case in 1890 which set the standard regarding the import of cloths made of mixed material. The company occupied 223-227 for nearly four decades, until finally going bankrupt in 1900, shortly after George W. Meyer’s demise.

After a short period occupied by cotton, hosiery, and underwear makers, the combined super-building became home to the Security Bank Note Company in 1904. This engraver was a major manufacturer of plates for the production of stock certificates, bank notes, and Pennsylvania’s state revenue stamps. The company, which was noted for its counterfeit-proof engravings, quickly gained popularity and outgrew the Chestnut Street facility in only two decades. They built an $85,000 factory at 55th and Sansom Streets in 1926. Amazingly, this Ballinger-designed factory stayed in operation until 2003 and still stands as a self-storage facility.

In its last days as the Security Bank Note Company, 1925 | Source: Philadelphia Architects and Buildings Project.

By 1930, 223-227 Chestnut became property of the federal government and was called the United States Public Health Service Hospital. Into the 1970s, the hospital would wear many different hats: health dispensary, quarantine station offices, outpatient clinic. It closed in 1975 as the Welfare Public Health Service Outpatient Clinic, at this point controlled by the Department of Health, Education, and Welfare.

On March 29th, 1976, the DHEW donated the building to the United American Indians of the Delaware Valley, a social and cultural non-profit dedicated to the education and employment of the estimated 15,000 Native Americans residing in the Delaware Valley formed by 42 separate tribes. The donation entailed a 30 year lease, after which the building would be owned outright by the organization. The UAIDV moved their offices from the City Hall Annex and converted the rest of the property into the Philadelphia Native American Museum, along with gift shop called the Trading Post. 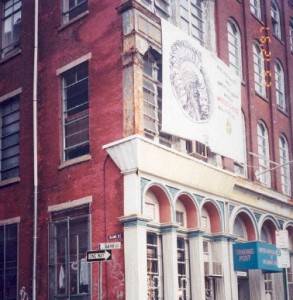 After closing the museum in 2004, UAIDV planned to turn the space into a Native American-themed Bed and Breakfast but was unable to get enough funding together to pull it off. The building was sold for $2 million on July 11th, 2006 to an LLC that intended to turn the property into a day spa/beauty complex (with a liquor license?!) and has had zoning board approval since late 2008 on a five year permit. After the Bank St. wall and windows were repaired using historic tax credits, nothing else further occurred. Thom of the OCCA claims the building’s grand central staircase, which is a contributing factor in its historic designation, was removed by the AWOL developer.

More than $25,000 is owed the city in delinquent property taxes.

According to public records, L & I has thrown down at least 13 violations on the space since 2006. Thom says he fears a public safety disaster. “The cast iron facade could fall at any moment,” he says, adding that he isn’t certain that a building stabilization study by reputable engineering firm was ever done.