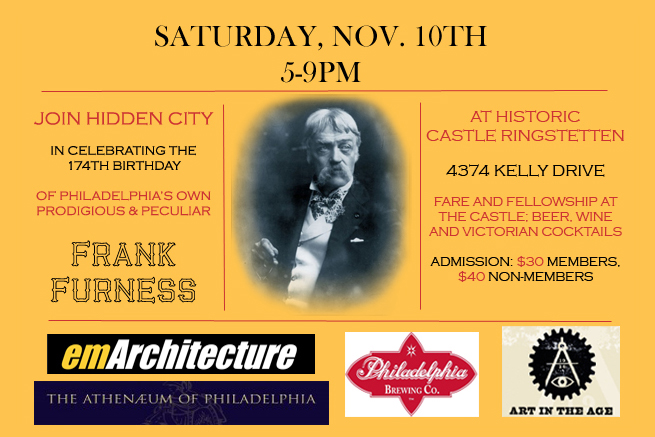 This will be the second annual celebration honoring the birth of Frank Furness. “Fearless Frank,” as we like to call him, is, (with apologies to Thomas U. Walter, William Strickland, Willis Hale and Howe & Lescaze), our favorite Philadelphia architect. This may seem like a rather tenuous excuse for a party, and a precious one to boot, yet it has been the passion of enthusiasts, as much as the work of scholars, that has rescued Furness’s reputation from the anti-Victorian abyss that threatened to swallow his architectural legacy during the 1940s, 50s and 60s.

Indeed, from steampunk to cocktails, many varieties of Victoriana have been revived through the labors of intrepid fans, leading to things both wonderful–the return of the rye Manhattan–and the dubious–the 1999 movie Wild Wild West. Even Wilkie Collins and his proto-detective novel The Moonstone has undergone a revival of sorts.

Philadelphia has never really excelled at Midwestern boostermism, but who knows, perhaps the genuine passion of locals embodied in events like this one will one day pair Furness and Philadelphia in the national imagination, much like Sullivan and Chicago, Neutra and Los Angeles and, further afield, Gaudi and Barcelona. Why not cheesesteaks, pretzels, the Liberty Bell, Rocky and…Fearless Frank? That’s something worth raising a glass to.

The photos above were taken by Daniel Cox before last year’s party. They are meant to whet, rather than satisfy your appetite. Photos can give you a sense of a place, but they can’t reproduce what both the Undine Barge Club and Castle Ringstetten have in spades, and that’s atmosphere. For more info on the party, click HERE.