Editor’s Note: Historian George Thomas is the mind behind Frank Furness 2012, a year-long celebration of the great architect on the centennial of his death in 1912. Thomas has co-written two anthologies on Furness and has a third book on the architect coming out next year on Penn Press. We caught up with him by e-mail last week.

Nathaniel Popkin: You note that Furness’ influence seems to be shifting from his historical importance in the stories of Philadelphia and American architecture to his influence on contemporary designers who are open to original thinkers and visions. Where and in what ways are you seeing this?
George Thomas: I suspect this actually began a couple of generations ago with George Howe, whose PSFS reflects its particular functions in different forms and and materials then shifted to the expression of Kahn and on to Venturi. In this way Furness was at the base of the so-called Philadelphia School of the 1950s-1980s and is certainly a part of the extension in the media age into the symbolic buildings of our more recent years. I am interested in the Art in the Age exhibit (now closed) which placed Furness as design and not as history. The big point is to see Philadelphia as having its own architectural voice, different from Boston’s history and New York’s fashion. 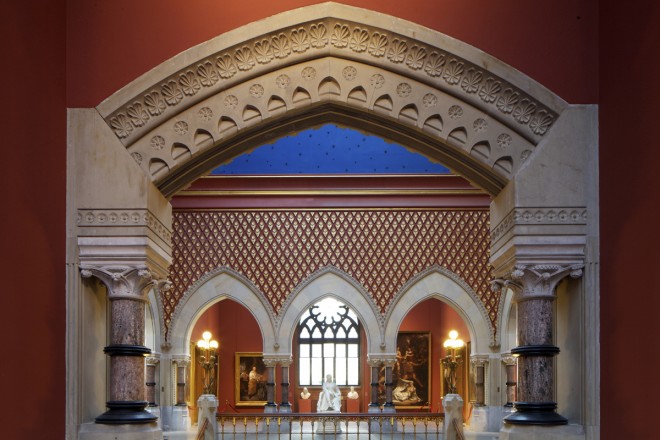 NP: You’ve been studying Furness for decades; as you’ve learned and discovered more, how has his story evolved? Are there original assumptions (or conclusions) you and others had made that have shifted over time? Furthermore, what’s new in Furness scholarship?
GT: The big issue is that I am now seeing him as a part of both the industrial culture that ran Philadelphia after the Civil War–and as profoundly modern in his attitude–if not his detail and expression. Furness looks Victorian because of the extent of his detail–which results from his ability to use machines to create ornament at low cost–but the bigger truth is his turn away from history to express the new possibilities of his time. I’ve nearly finished a major new manuscript for Penn Press next year that explains how and why he happened only in Philadelphia, and the new design theory of the city that supported his vision. One other point is that as his buildings have been restored we have discovered that he was a brilliant colorist as well as a designer.

My sense is that the new, original architecture that led to Modernism arose in engineering culture cities–first Philadelphia, then Chicago, then Glasgow, Berlin, Barcelona, etc. Engineers didn’t ask for historical solutions, they asked for solutions. As long as regions had their own integrity and identity, it was possible to have an architecture that differed from the media centers. This was eroded at the end of the 19th century when the entire architectural media collapsed into New York and its narrative took over.

NP: Many of us are familiar with Furness’ major Philadelphia buildings, but are there others in the city and beyond that are hidden or relatively undiscovered? What should should a burgeoning Frank Furness fan go check out?
GT: The really cool thing is to look around Rittenhouse–a dozen or more houses still there from tiny houses on Van Pelt Street to major mansions continuing his mode into the early twentieth century. Finding interesting buildings wherever doctors live and so on. we’re still finding buildings. 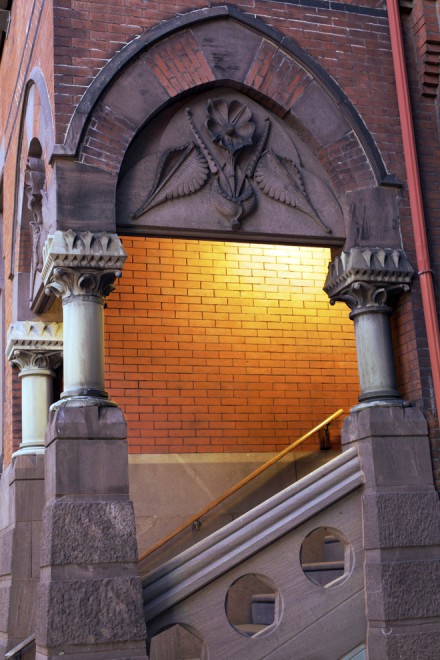 NP: Despite the demolition of some of his most important work, there is certainly enough of Frank left in Philadelphia to tell his story–and to engage residents and visitors in it. Frank Furness 2012 seems to me a start to that. But what’s next? In Barcelona, Gaudi’s story is told–and his work trumpeted–as much as any other narrative. In a good number of ways Furness’ story parallels Gaudi’s. Is it possible then to create tour programs, Furness maps, a Furness museum, perhaps?
GT: Yes–you are on track–our new website makes clear that Gaudi is the Furness of Barcelona. We are working on how to accomplish this in a future series of projects that would help create a new narrative for Philadelphia beyond ancestor worship and 1776.

NP: In too many ways, Frank Furness the original thinker/outlaw personality/man of outsized brilliance stands for a narrative that runs counter to Philadelphia’s shrunken and now cliched story: conservative, small-minded, careful…since Ed Bacon’s time we’ve stopped telling the story of the 19th century city…Do you think we’re ready to expand that shrunken narrative to remind ourselves of this city’s undercurrent of ambition…and how might doing so inject some energy into what many people think is an underperforming field of contemporary architecture?
GT: I did an op-ed on Philly for the Inquirer 15 years ago that made the case that Philadelphia was the center of seven or eight revolutions beginning with William Penn’s open community, continuing to Franklin’s idea of a college focused on the present and not the past, then 1776, then multiple industrial revolutions, standardization, scientific management that in turn unleashed artistic revolutions–Furness, Eakins, art coming from life and not from history, then the consumer revolution of the well-paid worker owning their own houses, going to the Jersey Shore and finally of course, ENIAC. The City of Revolutions seems a much bigger story than just 1776.

Again this is a story that I am taking on in the new manuscript. The point was that Furness represented the values of the industrial city–the greatest manufacturing city of its time and the center of industrial innovation–which Frank adapted to its architecture. In the process he gave his clients an identity that represented their industrial world–giant chimneys, steel girders across doorways and on fireplaces, huge beams spanning spaces, iron stairs, etc. Furness grappled with the new world. As Philadelphia has turned its focus to the past, to genes and not to genius, it has failed its future–we need to see Furness and the industrial creators as the great figures of our culture–and figure out how to move forward to claim the future. John Fry is doing this at Drexel–while Penn looks ever more timid–except in the medical complex.

Some of the young architects like Erdy-McHenry seem to be getting the structural exuberance and visual expression. At Penn the only cluster of buildings that show these characteristics are the work of Dean Glandt in the Engineering School, Skirkanich Hall, the new NanoTech lab etc., which are in the realm of expression and exuberance that made Philadelphia stand out. I’m not sure how this can be artificially inseminated as it were–my sense is that when Furness, Kahn and even Venturi grew up in Philadelphia, they grew up in an industrial city in which the buildings were expressive of their function and purpose. This was then incorporated into the character of their design in the core idea that buildings should be expressive as opposed to being just a veiling box.

The puzzle would be how to get young architects to understand the array of design strategies, the celebration of new materials, the vital expression of function that characterized the most interesting designs in the city and differentiated us from New York and Boston.