Building And Preserving A “House Of Wisdom” 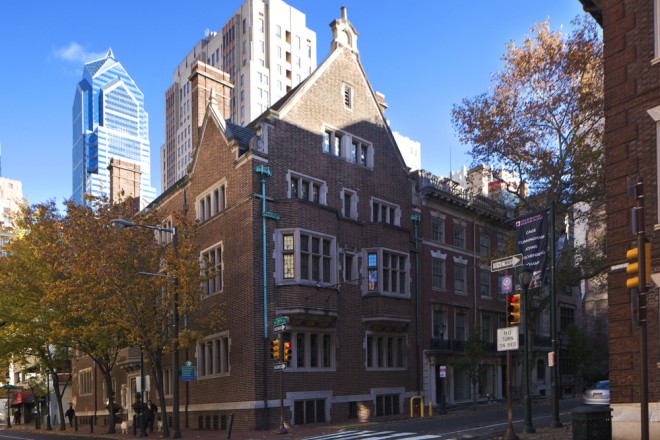 In 1889, when the banker and financier Charlton Yarnall married Anna Brinton Coxe, he was marrying up. Coxe was living on the wealth generated by the family’s massive mining concern, which had gotten its start here in the 1670s when Daniel Coxe began speculating in land. The Yarnells, slackers that they were, only began arriving here from Worcestershire, England in 1683. They noodled in at 580 acres in Delaware County and kept buying from there.

If you were Old Money in the late 19th century, you were quite the ruffian if you didn’t have a city house near Rittenhouse Square. Charlton and Anna must have felt the pressure. Just four years into marriage Yarnall commissioned architect Frank Miles Day to design him a house at 17th and Locust Streets that would beat out any other in the neighborhood–a tall order to say the least. Day came back with a silky four and a half story, 35 room, 18,000 square foot collegiate revival monster that would make the mansions nearby seem like overwrought carriage houses.

Years later, The Yarnall mansion would become the site of a pioneering act of interior preservation.

Impressed by the artist Violet Oakley’s murals recently completed at the state capitol building in Harrisburg, Charlton Yarnell hired her to create a mural series for his house’s foyer. Oakley worked with architect Day to fit the murals into the pre-existing architecture of the great house. Inspired by Renaissance art, Oakley put together a plan that would inject murals into every dome, pendentive, lunette, and octogonal panel she could find in there. Called The Building of the House of Wisdom, the murals tell the story of the rise of education and knowledge. 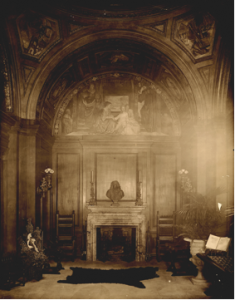 The foyer in 1911 | Source: Archives of American Art, Smithsonian Institution

The murals quickly became the talk of the town and the envy of every other wealthy family. They seemed to be the only part of the house anybody cared about and when the house went up for sale in 1927, the public was concerned that a new owner would destroy them. To prevent this, the Philadelphia Republican Women’s Club purchased the house and made it the headquarters of the Republican Women of Pennsylvania and named it the “Hannah Penn House” in honor of William Penn’s wife, who was said to “embody the spirit and ideals of Republican women.” For the next 14 years, the Republican Women rented the Hannah Penn House’s dining room and ballroom for special events. The space’s biggest selling point was the Oakley mural series.

By 1940, the building was in a pretty sorry state–a total renovation and upgrade was in order. The Republican Women sold the mansion to another female-founded organization, the Philadelphia branch of the United Service Club. Kenneth MacKenzie Day, son of the original architect, was commissioned to design the remodel.

The United Service Club was like a YMCA for enlisted men. The Philadelphia branch was founded by the Philadelphia Army and Navy Camp Committee of the National Congress of Mothers in 1917. At this new location, enlisted men could use the dormitory, recreation center, and cafeteria services offered by the organization. In wartime, these clubs were often used as a farewell place between officers and their families before leaving for war. Throughout the 1950s and 1960s the Yarnall house was the local American Red Cross.

In 1973, when the house was being converted for the Institute of Paralegal Training, the murals became endangered once again. Edith Emerson, first director of the Woodmere Museum (and Violet Oakley’s partner), took possession of the murals and put them on display in the Chestnut Hill museum, where they still reside today.

The Institute of Paralegal Training only stayed in the building until 1982, but used the building for its Institute of Employee Benefit Training for years thereafter. After spending the 1990s as law offices, the building became Urban Outfitters/Anthropologie/Free People headquarters before the advertising agency Star Group purchased the building in 2005 for $4 million. The old dining room is now the company’s conference space.