A Long Life In Limbo: 19th Street Baptist & The Challenges That Lie Ahead 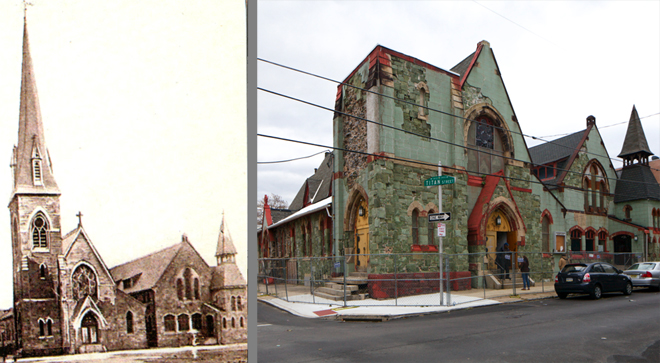 Editor’s Note: Join Aaron Wunsch, professor of historic preservation at the University of Pennsylvania, for a tour of endangered 19th Street Baptist Church, a little-known beauty designed by Frank Furness. The building’s lovely green serpentine facade has proven to be extremely fragile, making it one part of what Wunsch calls “a three-part preservation puzzle.” Find out about the other two parts of the puzzle, talk possible solutions, tour the building inside and out, and talk to the deacon who has spearheaded the congregation’s efforts to stabilize the building. The tour will be free to members of all levels. For further Information: Contact Lee Tusman at ltusman@hiddencityphila.org or at 267-428-1661. To sign up, click HERE.

Amid the current fanfare occasioned by the centennial of Frank Furness’ death, it is sometimes hard to remember that he did not always design for the wealthy. While his famous Philadelphia-area commissions generally housed well-capitalized people and institutions near Center City and the Main Line, several of his firm’s lesser-known works lay in between, both economically and geographically. Such was the case with the Memorial Church of the Holy Comforter (now 19th Street Baptist), at 19th and Titan Streets, a workingman’s church that has only recently been saved from irreversible deterioration by emergency structural repairs. While present church and civic leaders like former Philadelphia Mayor W. Wilson Goode have been raising some funds for the emergency stabilization, the church’s present congregation hasn’t the resources to complete a proper restoration. And so it remains in limbo, a puzzle of preservation.

Erected in 1874, 19th Street Baptist is technically the work of Furness’ partner, George W. Hewitt. But the building’s wayward massing, playful asymmetries, and delightful (perhaps winking) palette show the two men spoke a common language. In this case, they did so in a neighborhood described by contemporaries as “newly built up and densely populated, mostly by the industrious working classes.” 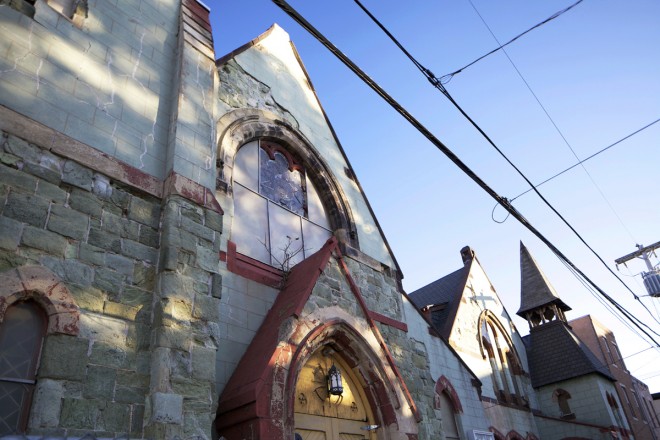 The striking, green complex at 19th and Titan was a gift of Margaretta Lewis, a devout member of St. Peters Episcopal Church who used the project to commemorate her mother (another Lewis relative was poised to marry a leading draftsman in Furness & Hewitt’s office). But Holy Comforter was more than a memorial; it was also a “mission” church. Born of a venerable Old City congregation, it was meant to serve a peripheral area long reached by Irish Tract Lane. That name and route were gone by the 1870s but there was some demographic continuity. The local population consisted largely of working-class Irish and Scottish immigrants and their native-born children. Some were recent converts to Episcopalianism and Old St. Peter’s wished to see more of them. One wonders if the choice of green building stone was in fact a nod to national origins.

When early 20th century sociologists studied neighborhoods like Holy Comforter’s ringing the urban core, they called it vaguely a “Zone of Workingmen’s Homes.” Situated between the old inner city and the leafy “Commuter Zone” further out, the neighborhood has always been in a kind of spatial limbo. The geography of Philadelphia–and indeed of most cities–was always more complex than this. Still, the district label conveys something essential about the lower-middling milieu that Holy Comforter was intended to serve. When church members died, their bodies traveled not to elite enclaves like Laurel Hill or Woodlands cemeteries but to the strivers’ field of Mount Moriah. Holy Comforter was meant to engender both devotion and socio-economic uplift. Thus, in addition to the 400-person worship space, the complex also featured a large Sunday school–all for around $45,000.

The price tag sounds like a bargain, but Lewis knew that funds for upkeep and maintenance would always be scarce, so she left a substantial bequest to the church for these purposes. When an African-American Baptist congregation bought the building around World War II, they believed that Ms. Lewis’ trust fund conveyed with the property. Alas, a bruising legal battle, fought early in the 21st century, did not end in their favor. That saga set the stage for the current predicament. 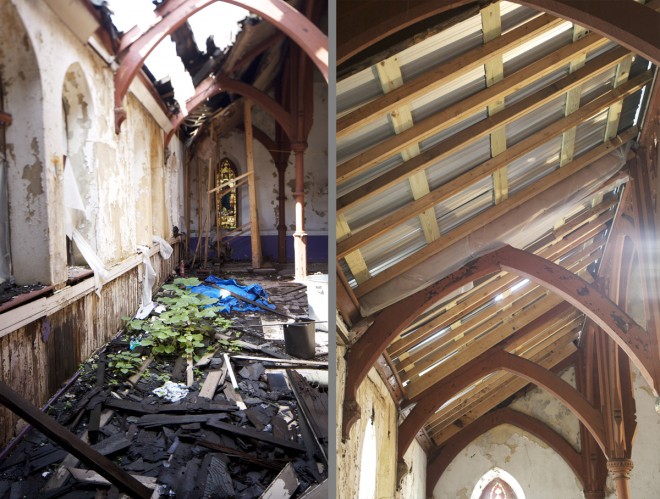 Before and after | Photo: HIdden City Daily

With the death of Rev. Charles Walker, the church’s magnetic and revered pastor, hopes of finding justice in the courts or through moral suasion died as well. Many members drifted off to join other congregations and the house of worship, already suffering from deferred maintenance, went into steep decline. The dual ravages of Hurricane Irene and a small earthquake in 2011 left the structure looking so forlorn that City officials condemned it. Church leaders and Furness enthusiasts then joined forces, applying new roofing material and other much-needed remedies. But while the attached school-cum-parish house is in good repair, the church itself still needs help.

The preservation puzzle has at least three separate pieces.

Geography remains a challenge. While the surrounding Point Breeze neighborhood is rapidly gentrifying, few people from other parts of the city know the church is there, and few locals pay attention to it. Economic hardship may be decreasing in the area, but the church’s relative remoteness and lack of visibility make publicity and fundraising harder. 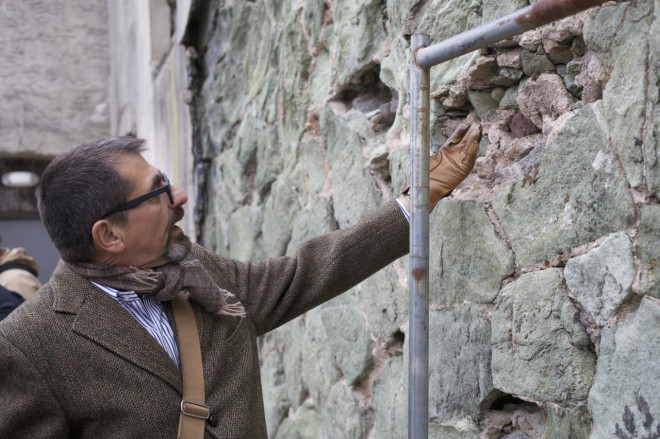 Even if funds were forthcoming, it isn’t clear who would hold or allocate them. Church leaders are eager to fix and reoccupy the building but their associate minister (and able electrician), Vincent Smith, acknowledges the need for an external fundraising apparatus. Rev. W. Wilson Goode, the former mayor, has donated generously and convinced others to do so. And the National Trust for Historic Preservation made a well-timed emergency grant last fall.

But to take the work from short-term stabilization to long-term restoration, a new “Friends of 19th Street Baptist” group, perhaps along the lines of the Old Pine Conservancy that tends to Third Presbyterian Church in Old City, is needed. Maybe even a distant and estranged, but related church such as St. Peter’s could assist. Beyond these more hallowed institutions, one might look to a group like the Friends of Frank Furness, who had followed the building’s plight on their now closed Facebook page. And, of course, there is the Preservation Alliance of Greater Philadelphia, which has weighed in on the saga constructively from time to time, but which is limited by its present search for a new director. 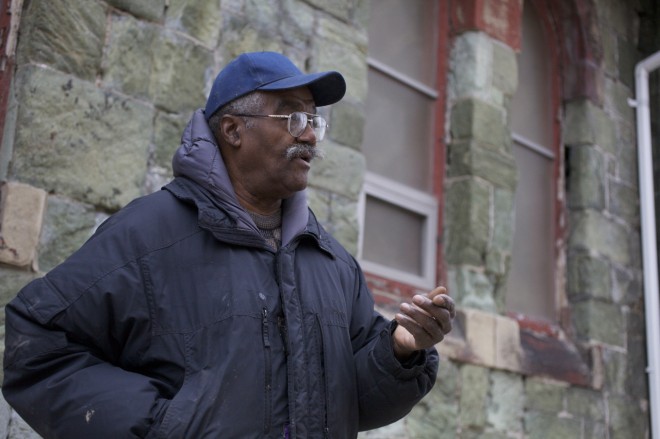 A third constraint is just as daunting: the nature of the required repairs. Even the preliminaries have been difficult. A year ago, the building called for immediate stabilization on a shoestring budget–a makeshift mode of operation alien to most professional preservationists. Beautiful craftsmanship, fully insured contractors, and detailed conditions assessments were unaffordable luxuries. Trust, determination, and volunteer effort filled the void, as did a willingness to make do. The result is a remarkably good short-term fix, overseen by the church’s deacon and de facto carpenter, Lloyd Butler.

In the long run, more money and expertise will be needed. The structure’s serpentine cladding has suffered much the same fate here as elsewhere in the city: it simply turns to dust. But Holy Comforter was one of the Furness firm’s rare experiments with this material, and it is the only major one standing. The challenge of conserving it has already given a brave Penn preservation student her thesis topic. With any luck, the building’s magnetism will continue to attract visitors, donors, and experts. And perhaps the church’s congregation will similarly rebound. Furness’ green church will need many hands to keep it alive as a meaningful place in the contemporary city.