Working for high profile architects and planners quickly put Gallery in touch with the upper echelons of power in Philadelphia. He was central to the city’s architecturally and socially progressive Bicentennial world’s fair planning and in the 1970s was the author of a number of highly regarded and forward-thinking studies on designing the city’s future.

While working on the ultimately flawed Bicentennial project, Gallery was approached by the Rizzo administration to head a new housing and development agency, which would eventually become the OHCD.  Gallery believes he was named Rizzo’s housing director to bring more credibility to the embattled mayor’s second term, which followed the mayor alienating members of his own party and famously failing a lie detector test on his role in doling out city patronage jobs. Gallery, a soft-spoken, self-described “far-left, liberal Democrat,” was initially worried about whether he would be able to mesh with a mayor known for his combativeness and socially conservative policies. However, he says Rizzo, worried about being tarred as incompetent, gave a great deal “of deference to professionals.” 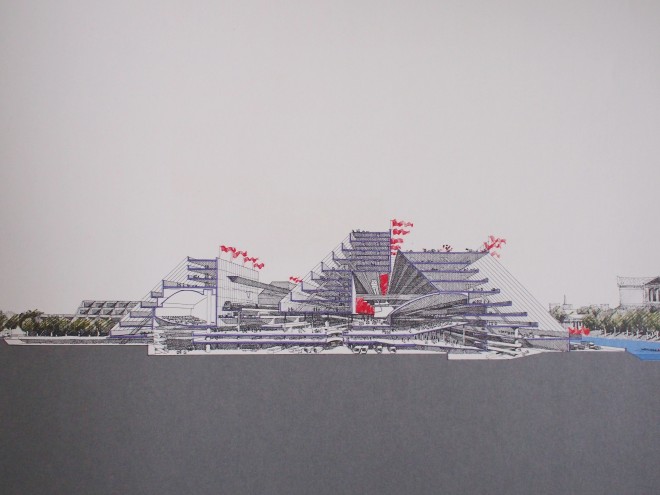 Schematic rendering of the “Megastructure” at 30th Street, planned for the nation’s bicentennial world’s fair in 1976, from “Toward a Meaningful Bicentennial,” the book John Gallery helped produce on behalf of the city’s effort to win federal support for the event.

Around this time, Gallery spun off a consulting firm called Urban Partners, of which he is still a minority partner. Urban Partners was created to to help non-profits and developers execute projects that were “either unusual or had some social objectives, low-income housing, things of that nature.” One of these “social objectives” included historic preservation, as Gallery married the ideals–and funding potential–of the affordable housing and economic development movements with the objective of stabilizing historic properties.

“[Gallery] and his associates were frustrated by what they saw as [development] opportunities in Philadelphia that were not being pursued, and so they decided to create a private sector firm, Urban Partners, that would really focus on implementation,” said Kromer, who also noted the firm focused on ventures that were too “edgy” for conventional real estate developers to pursue.

Gallery went on to work through these organizations and independently on numerous historic preservation initiatives and reuse projects, notably supporting the creation of the Diamond Street Historic District, one of the first in a primarily African-American neighborhood, and assisting with the stunning restoration and reuse of the Lit Brothers building on Market Street.

His administrative reputation and preservation work would lead him to assist in the consolidation of the Preservation Coalition and the Philadelphia Historic Preservation Corporation in 1996, viewed at the time as redundant organization. The result of the merger was the creation of the modern Preservation Alliance. 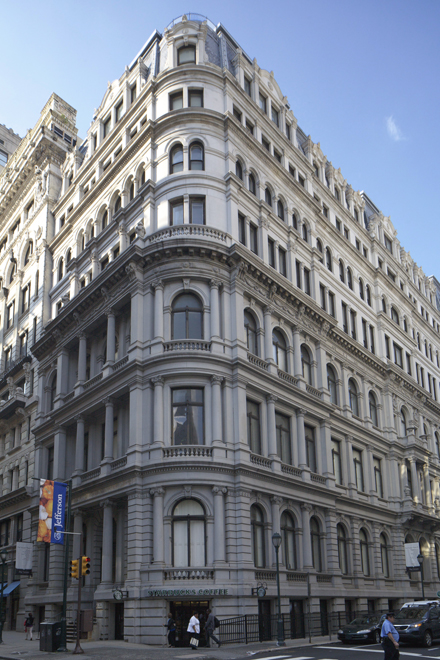 Gallery’s Preservation Alliance was a dogged advocate for the Victory Building on 10th and Chestnut Streets. The Second Empire gem was almost a victim of demolition by neglect during 1980s and early 1990s, and finally restored by Philadelphia Management in 2005 | Photo: Hidden City Daily

In 2001, Gallery was again tapped to help draw up a new strategic plan for the already ailing Preservation Alliance, which had begun laying off staff due funding problems. A competing preservation organization, known as the Foundation for Architecture, had recently imploded, an ill omen for the Alliance.

After drawing up a new organizational structure, Gallery and the Alliance board realized that there was no institutional money available to attract a qualified executive director to actually execute the plan. Gallery was retained as a part-time “consultant” and functioned as nominal acting director until he could raise the funds for a full-time salary.

Gallery is widely regarded as having strengthened the Alliance during his reign, bolstering its finances and building institutional credibility with a “hands-on” administrative style. “Gallery took the helm when preservation was in a real tailspin in this town,” said Aaron Wunsch, Assistant Professor of Landscape Architecture Historic Preservation at the University of Pennsylvania, who has frequently worked with the Alliance. “Before the Alliance was formed, there were multiple, competing preservation groups. Under John’s tenure, the Alliance picked up the pieces and made a functional whole.”

Gallery’s departure comes at tumultuous time. As real estate market activity has increased substantially in Philadelphia, development pressures have increased, calling into question the capacity and focus of the Alliance, which has increasingly been viewed a crucial counterweight to the city’s Historical Commission, which is crippled by lack of funding.

Gallery, says Kromer, “has an encyclopedic knowledge of buildings and structures that are important in the region. He also has a lot of knowledge about the personalities that are involved, the developers, the advocates, the institutions,” echoing a widely held view, and concern, that Gallery’s departure brings with it the loss of a tremendous institutional memory and connections.

Gallery has not been without his critics, all of whom wished to remain anonymous due to the intimate nature of the preservation community in Philadelphia. While no one disputed his commitment to advancing historic preservation, Gallery was frequently characterized as a “conservative” preservationist, insistent on pushing for the total restoration of historic buildings over all else and for his focus on a “contextual approach” to new architectural development.

Critics say the “purist” viewpoint can lead the loss of buildings in the long run as alternative approaches to preservation are ignored or written off as potentially compromising historic “fabric.”

Others say more broadly that while the organization has been successful in alienating the groups it doesn’t like, it has at the same time failed to attract new constituents, draining its overall appeal to the general public. Gallery was generally seen as having advanced the Alliance in the institutional world through his existing connections, but as someone that personally disliked the network-building that might have reached more people outside the preservation world.

The difficulty he had reaching out and failure “to enable others, engaging neighbors while also engaging leadership,” has led to many of Gallery’s battles becoming “personal crusades,” instead of more broad-based public causes, said one source.

Supporters, on the other hand, point to the Alliance’s African American Outreach Initiative and the Vital Neighborhoods Initiative, both strongly institutionalized programs that push preservation in non-traditional directions.

Regardless of how Gallery’s legacy is ultimately judged, there is no question that his departure leaves a massive vacuum at the Alliance, and the foundation that he built virtually guarantees that any successor will have the opportunity to wield substantial influence in the world of preservation and real estate development. Critics of Gallery see a chance for a wholesale institutional change of direction, while supporters worry about finding someone big enough to fill the shoes of the longstanding executive director.

While the Alliance has stayed mum on any possible candidates thus far, the rumor mill has kicked into high gear. Top contenders at the moment are Sally Elk, president and CEO of the Eastern State Penitentiary Historic Site, Inc., who is thought of embracing a less orthodox form of preservation philosophy through her connection to the “preserved ruin” that is ESP. Jessica Baumart, the new executive director of the Woodlands Cemetery, was mentioned as another possibility, thanks to her work drawing attention and modernizing the appeal of a once obscure historical attraction.

Sources say there is a a feeling on the board that they ought to seek candidates with more business experience. Paul Steinke, the Reading Terminal Market general manager, who has also been active with a number of historic preservation organizations, has been repeatedly mentioned by board members as a candidate with the ideal mixture of preservation skills and business acumen. Others worry that a business-focused leader could compromise the Alliance’s independent voice. The strategy is sometimes viewed as a cure-all for non-profits, which are always on a hunt for better financial footing.

A further problem with the fairly youthful crop of potential candidates is that all are currently high-profile figures precisely because they are in the midst of successfully building organizations they might be reluctant to abandon. There was a feeling amongst sources that none of the early contenders were likely to be interested in taking on the uphill battle of furthering the Preservation Alliance’s manifold duties.