When Voting Was A Public Act

Excerpted from Northern Liberties: The Story of a Philadelphia River Ward, recently published by the History Press) 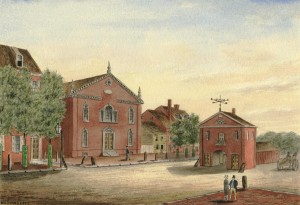 The Northern Liberties Town House, at Second and Coates Street (Fairmount Ave.), 1806. The Town House is the smaller building with the market sheds behind it. The large building is the missionary church of the Second Presbyterian Church of Philadelphia, which opened in 1805 and later became the First Presbyterian Church in the Northern Liberties. It is the current site of The 700 Club, a watering hole. This 1883 watercolor is by Benjamin R. Evans. Library Company of Philadelphia.

With our electoral system bogged down by special interest cash and corporate influence, perhaps it’s useful to recall how much our democratic institutions have changed. Voting in 1806, the year depicted in this watercolor, a free male –black or white (for the African American right to vote wasn’t rescinded until 1838)–living in the Northern Liberties, could go to Commissioners’ Hall, at Second and Fairmount, to place his ballot.

The Northern Liberties, of course, was the sixth largest city in the nation until 1820 and a top tier city until it was consolidated with the rest of the county of Philadelphia in 1854.

Commissioners’ Hall was inside the Northern Liberties Town House, with its market shed in the back taking up the center of the broad road. Here was the office of the mayor, police headquarters, and other government officials.

The Town House was built in 1796–97. The brick building, 24 feet wide and 30 feet deep, was constructed 40 feet north of Coates Street in the center of Second Street. It had a cupola on top and resembled the head-house still standing at Second and Pine. 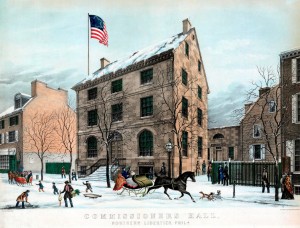 The Commissioners’ Hall of Northern Liberties in its prime, showing a winter scene in 1852. Note: the mayor’s office was in the rear. Lithograph by Charles Conrad Kuchel. Library Company of Philadelphia.

The structure had been constructed back in 1757 by the Pennsylvania Provincial Assembly as the central barracks for British soldiers who were stationed in the Philadelphia area. The king’s troops had encamped in this zone since 1745, giving it the name Campington (later shortened to Camptown). The “aged John Brown” told annalist John Watson that the ground was “a field of buckwheat, which was cut off [down], and the barracks built thereon and tenanted by three thousand men.” Campington was between Second and Fourth, around Spring Garden Street; a parade ground faced Second Street. 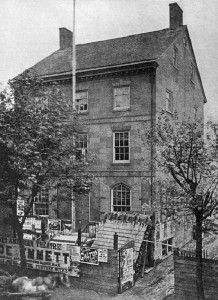 The former Commissioners’ Hall of Northern Liberties, Third below Green Streets, soon before its demolition in 1868.

Watson also reported that in 1772 King George III’s birthday “was celebrated at the British barracks by a discharge of twenty-one cannon.” How remote these parts were in those days!

The central barracks was a three-story building with a courtroom on the first floor and officers’ quarters on the upper floors. After the War of Independence, it was used as a tavern until the Commissioners of Northern Liberties purchased it as their new assembly hall. They first met there as a body on February 17, 1815.

Facing Third Street, the hall became a local landmark that hosted elections (this was the central place to vote in the Liberties), civil proceedings and other public meetings. In later years, the office of the mayor of Northern Liberties was in a separate cabin at the rear. The hall was also used by various churches for religious meetings and services in the era when such gatherings could take place in government offices. Among them, a pair of assistants at Christ Church (Second and Market) started an afternoon Sunday school at Commissioners’ Hall in the fall of 1814.  Besides being the first Sunday school started by the Episcopal church, this was reportedly the first Sunday school officially incorporated by any religious organization in America. The informal school resulted in the formation of St. John’s Protestant Episcopal Church, erected in 1816 and now known as Holy Trinity Romanian Orthodox Church. 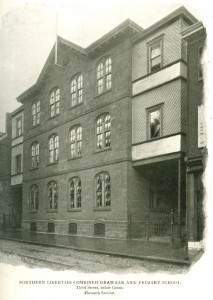 The Northern Liberties Grammar School, around 1896. It was removed in the 1920s for the construction of Spring Garden Street. From The Public Schools of Philadelphia (1897).

The Fire Administration Building now stands on this same site at Third and Spring Garden Streets. Opened in 1976, this structure also accommodates the Fire Communications Center and the Office of Emergency Preparedness.