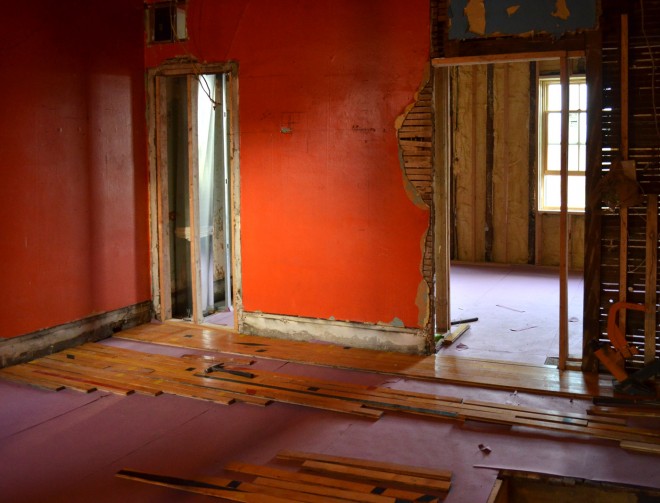 Last week, I closed the loop on a reciprocal labor swap two years in limbo. One morning in 2010, I sat on a stoop on a cramped South Philly block, waiting for a woman named Mira to arrive with a rented flooring nailer. We had both recently purchased hundreds of square feet of salvaged flooring, reclaimed locally by Provenance Salvage. Mira’s was to be laid down on the second story of her occupied house, and she wasted no time in attacking it. My flooring was one piece in a gut rehab, which, through a mix of my own naïvité and self-delusion, had drawn out into limbo. Now, I was finally ready for Mira to return the day of labor I’d given to her.

Before then Mira and I had never met; it was the mystique of the phrase “flooring from a South Philly gym” that had linked us. “Gym floor? I know someone else who just bought gym floor,” a friend had said. Given the niche size of the architectural salvage market, I knew we must have acquired subdivisions of the same basketball court, as it was torn out of a schoolhouse likely undergoing condo conversion. So I cold-called her and suggested, each of us being amateur renovators, that we help each other–laying a social tie on top of this material one.

The flooring came via Provenance’s Bob Beaty (a Hidden City Philadelphia board member), who came into my life in 2006, when I worked at Habitat for Humanity and he had contracted to strip everything of architectural value from the interior of the Divine Lorraine. Bob had invited Habitat, a non-profit home builder, to browse the offerings, and two things resulted: I brought along my old box camera and made a definitive image of the top floor’s faded elegance, and Habitat acquired some hardwood floor that still had life after thirteen decades of service. They installed it across the double-wide first floor of two merged houses on Titan Street in Point Breeze, refinishing it to a polyurethane shine.

Those floor planks, however, took hundreds of hours of volunteer labor to prepare. Not involved in that project, I didn’t grasp the lesson, and so projected an unrealistic timeline for my flooring. Two friends helped me transport the 800 square feet home from Provenance’s warehouse and the enormity of the task settled in as I lay like a stowaway, squeezed into the 18 inch gap between the top of the stacked material and the roof of the borrowed van, my (larger) friends riding in cab.

Tongue and groove flooring does not lend itself to easy re-use; the better the original installation, the tougher it is to remove, and this is as it should be. Planks get butted up tightly, because any gaps will let in mop or rain water, swelling the boards and causing bowing. They are secured by specialty nails sunk diagonally into the tongues, which then become encased, and inaccessible, in the groove of the next plank. Even with great care, the extraction process carries a high damage rate.

The Divine Lorraine flooring required extensive de-nailing. The gym floor, however, had been installed with adhesive onto the school’s concrete foundation slab, and it remained, gloppy in some spots and minimal in others, all along the tongues and in the grooves. 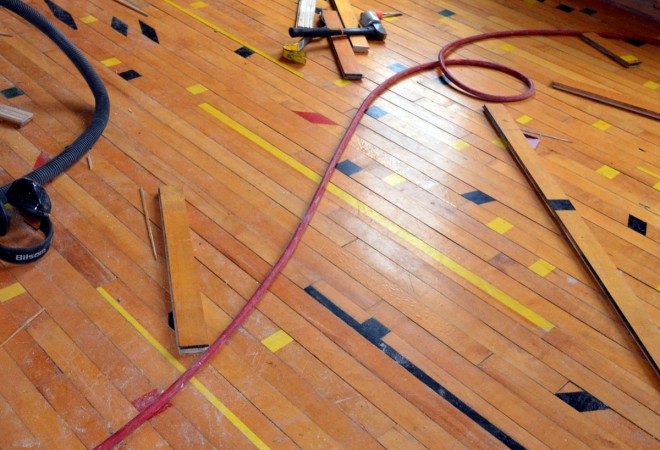 A glimpse at the finished project. Because the flooring was shuffled during relocation like a deck of cards, and laid down again at random, it now makes a whimsical scene: the neat basketball court lines have been exploded into little zips of red, black, and green, across the expanse of each room. Some have called it Russian Constructivist; others simply say it looks like confetti. | Photo: Jacob Hellman

Without scraping off the hard adhesive the floor planks wouldn’t fit together again. The adhesive, black and harder than any construction material I’d previously encountered, would come in time to consume me.

Author’s Note: Next week, I’ll explain more about the troublesome process of reclaiming wood, and visit two other Philadelphians who’ve done it with the same gym floor.