On The Anniversary Of Bacon’s Death, Harry Remembers 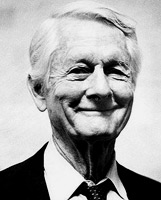 Yesterday was the seventh anniversary of the death of Philadelphia’s Modernist city planner, Ed Bacon. Over the years, as I was grappling with this bundle of contradictions that is Philadelphia, I would run into Mr. Bacon. Once, as a brash thirty-something, I accosted him in Rittenhouse Square with questions about the Center City commuter tunnel, which combined the vestiges of the Reading and Pennsylvania Railroads.

I had seen Bacon at several events in the early 2000s, but how interesting was it for me to actually speak with “The Father of Modern Philadelphia?” 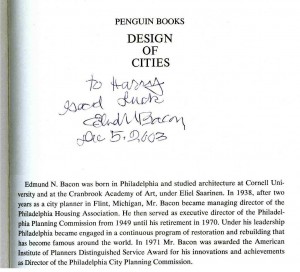 He responded to my queries, perhaps with a bit of ire, but that was what I had expected. Yet I believe that the episode—one of perhaps hundreds he had had over the years—pleased him, as here was someone showing an interest in one of his life’s achievements.

In the next few years before his death, I encountered Bacon a few more times, the last during a “Save the Boyd” event in late 2003. The Friends of the Boyd were formed to save the Boyd Theater, an art deco landmark on Chestnut Street between 19th and 20th, one block from Rittenhouse Square. Known as the Sam Eric Theater when it closed in May 2002, the Boyd is Philadelphia’s last intact movie palace. I’ve been somewhat involved in the effort to save the Boyd since about that time.

On December 5, 2003, the Friends of the Boyd presented The Philadelphia Story (1940) at International House as part of its fundraising activities. (One motion picture from every decade of the twentieth century was featured in this film series.) The event included a VIP reception with Bacon as special guest. 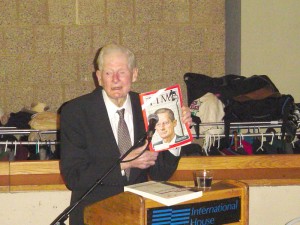 I had brought with me a copy of the November 6, 1964, issue of Time magazine with Bacon on the cover. An eBay purchase only a few days before, it was published only three weeks before I was born. I also had a copy of Bacon’s Design of Cities,  first published in 1967 (my copy was a revised later edition). I resolved to get him to sign both items, which, after a bit finagling, I did. Plus, I got to speak with him again about the city we both love.

When he addressed the crowd during his remarks, I gave him a copy of the issue of Time. Somebody snapped a photograph of him just when he has holding it up to make a point. The somebody, a kind soul, later emailed me that photo. So I have a picture of Ed Bacon holding the very magazine that he had just signed for me. The photo, the issue of Time, and Bacon’s Design of Cities are the most prized items in my collection of over 2,000 books and all kinds of ephemera about Philadelphia. 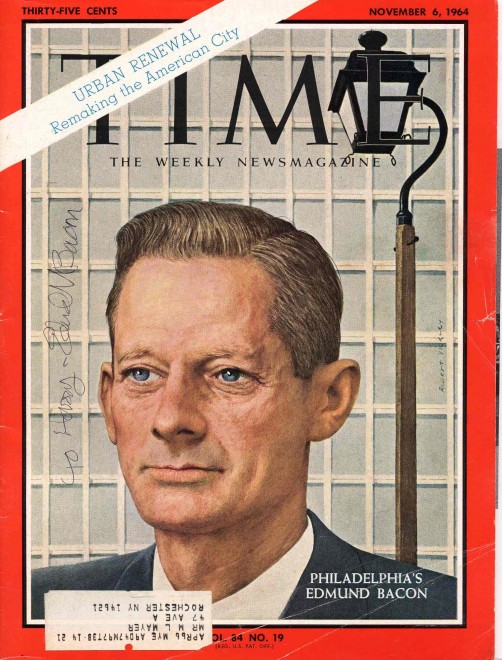