On Front Street, Digging Through Time 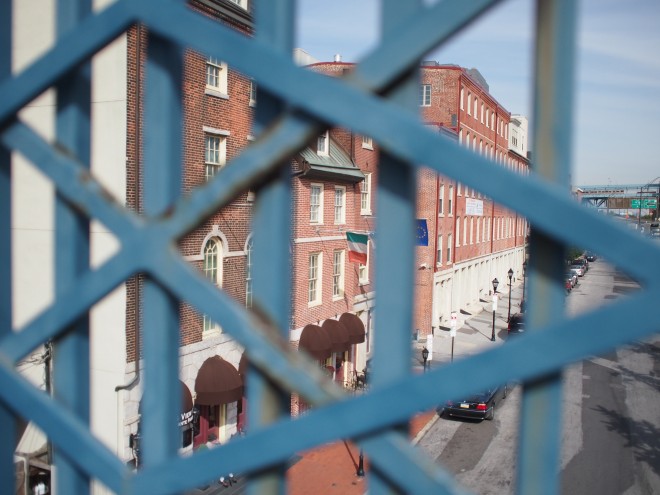 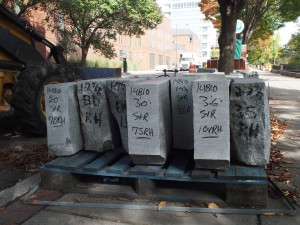 Author’s Note: Recent repaving work on Front Street in Old City and Society Hill has brought to mind the long history of this thoroughfare, the oldest formal road in Philadelphia. As all good histories, the story of Front Street includes pirates. Indeed, perhaps all the digging will uncover some ancient pirate booty.

Delaware Front Street was first a residential street, with commanding houses owned by the wealthiest early settlers facing the river from its western side. This pattern gave way almost immediately to a crowded labyrinth of boardinghouses, workshops, and warehouses. “Front street was the former great street for all kinds of goods by wholesale,” John Fanning Watson wrote in his Annals of Philadelphia and Pennsylvania. 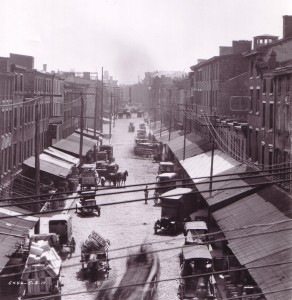 Continuing north up the river, the street was the main highway to other towns, Frankford above all. Revolutionary War armies, both American and British, used it as the primary entrance into Philadelphia from the north. For instance, right before the Battle of Brandywine, the Continental Army marched into the city via Front Street and then turned west onto Chestnut Street to head out of town.

During the 1777-78 British occupation of Philadelphia, Royal Army soldiers manned a military post at Front and Noble Streets. Clearing this gate was the only permissible way to enter or exit Philadelphia from the north during the occupation. A Quaker woman named Lydia Darragh (1729–1789) coolly walked past this post on December 3, 1777, making her way through and out of the Liberties to deliver information to General George Washington about British plans to attack American troops at Whitemarsh, Pennsylvania.

All this activity stemmed from Front Street being part of the King’s Highway, a road that followed an old Indian trail along the Delaware River’s west bank from New Castle, Delaware, to the falls of the Delaware at Trenton, New Jersey. The Provincial Council of Pennsylvania ordered construction of Front Street, the first major highway in Pennsylvania, in 1686.

The King’s Highway reached New York City via central New Jersey by 1756, thus creating the key colonial link between Philadelphia and New York. It later became the first direct stagecoach route between the two cities, reducing travel time between them to three days. The King’s Highway would eventually extend north and south along the East Coast through several states. It still exists as US Route 13, closely following its original configuration and paralleling Interstate 95.

A 1776 map of Philadelphia, showing Front Street as the broadest street in the city–besides Market Street.

It’s worth noting that the construction of I-95 resulted in the crude relocation and narrowing of Front Street from Race to Arch and its complete elimination between Vine and Race, a callous act to inflict on an historic street.

Front Street north of Vine does retain some of its early appearance, old-time Belgian blocks and all. It even rises and falls a bit from Vine to Spring Garden, especially as it heads past the former location of Pegg’s Run (a creek now flowing as a sewer under Willow Street). This is a manifestation, to this day, of the rolling terrain of the original high bluff on the Delaware River’s edge that met the William Penn’s Quaker transplants in 1682. Front Street south of Arch is paved with asphalt, but it, too, undulates, particularly as it approaches the location of the now in-filled Dock Creek.

As for pirate treasure along this street, well, who knows what is still buried under the dips and rises of this old road? 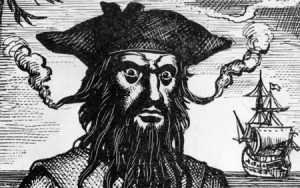 The pirate Edward Teach (1680-1718), otherwise known as Blackbeard, was a patron of the Blue Anchor Tavern on dock Creek. The renowned inn was under construction but already in business when William Penn first came to Philadelphia in 1682. (The traditional story that William Penn drank a glass of ale when he came first ashore seems not to have upset even the most pious of Quakers.)

Indeed, it was common to see pirates of the Atlantic Coast, including Blackbeard and William “Captain” Kidd (ca. 1645-1701), openly swagger along Front Street and vicinity. Working and retired sea robbers liked being in Philadelphia because of the mild temper of Quaker justice.

But Penn, living in England at the end of the seventeenth century, did not endorse this. In 1697, he wrote to his American agent, William Markham–whose daughter married an alleged pirate–that Londoners maintained Philadelphians “not onlie wink att but imbrace pirats, shipps and men.” While the Pennsylvania Assembly denied this accusation, it did pass a stringent law for the suppression of piracy and trading with or harboring buccaneers.

Rumors of buried treasure along Philadelphia’s waterfront persisted for hundreds of years. Watson claimed that a pot of money (at least $5,000) was once found buried in the cellar of a tavern at Front and Spruce Streets. Plus, many people hunted and dug for pirate plunder around where Fairmount Street met Front Street and also along the Cohocksink Creek, which wound its way through the Northern Liberties, and Pegg’s Run.