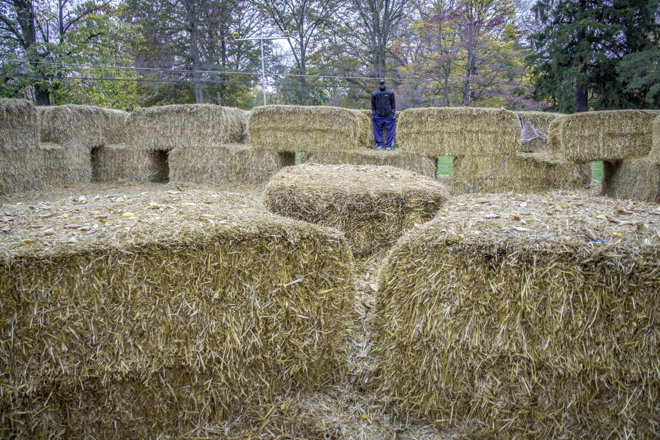 Editor’s Note: For the third year, architect Peter Everett Brown was commissioned by Woodmere Art Museum in Chestnut Hill to create a maze on the grounds of the museum. The project was so popular last year that its size and scale were increased–and this year it was marketed as part of Chestnut Hill’s “Harry Potter Weekend.” Nathaniel Popkin caught up with Brown to talk about the maze and the emergence of temporal architecture.

Nathaniel Popkin: You mentioned that this is the sort of project that architects do when the economy is poor and there isn’t a lot of work. But it seems like more than that–for the last few years, designers and others have been having fun playing with the notion of the ephemeral. Pop-up gardens, stores, festivals…. so does this project come from the same instinct?
Peter Brown: Yes you are correct, it is multifaceted. Installations are rather quick and require fewer resources in comparison to architecture; there’s less baggage, which increases the appeal and fun factor.

It seems to me, the current economy provides time/space/cause for design professionals to consider a broader spectrum of projects. We manage quite well outside of our comfort zone. Within each design project the instincts and process are similar–it’s the user, media (materials) and context that change. 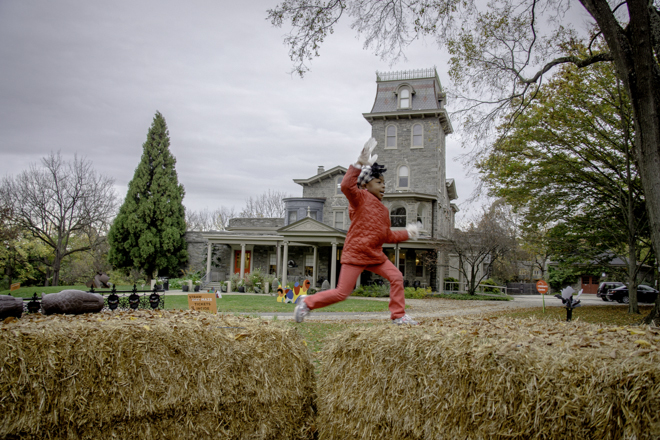 NP: On the other hand, I imagine every architect has a bit of Lou Kahn in him–you want to build “permanent” structures, so does is something like this a bit melancholic? You put it up, hope it doesn’t rain too much (or that a hurricane doesn’t come), and then poof, it goes into the compost…. all that effort gone?
PB: Sure, permanence is an ideal, but that’s why they invented the camera. Most things that we help to produce will change; few things remain the same. Besides we wouldn’t want the carnival to be permanent–it needs to leave town before it becomes an eyesore. Knowing it will eventually be repurposed–poof!–reduces the stress to a cheerful level.

As a designer there is always a melancholic moment when the object is no longer yours, transference is inherent in every project. You need to (take lots and lots of photos) let go, move on and remember the lessons learned.

NP: But countering that (here we go back and forth!), this is the third year for the maze, so there is a kind of permanence developing, as you say a local tradition, a yearly ritual. Did you imagine you would be doing this every year?
PB: No–I was pleasantly surprised to be asked to consider the installation for 2012. The Woodmere is a wonderful partner. For me, helping to methodically build an annual tradition is a worthy pursuit. We are both learning as we try to exceed the expectations of the previous year. As we gain knowledge our confidence grows; its good stuff. 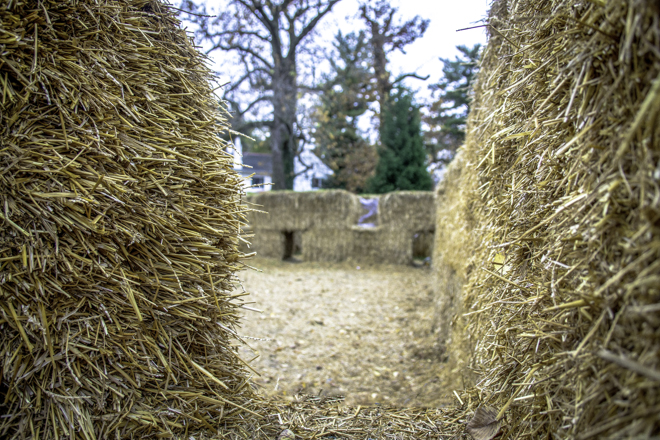 NP: This year the bales of hay are much more massive, and so the structure is more ambitious. Was it harder to work with larger bales?
PB: The Woodmere property is challenging because of the slope. As we discovered last year, stacking traditional bale sizes on the side of a hill has limitations. Switching to large bales (which are made of straw, I didn’t realize the difference until last year; straw is less bioactive which makes it more stable than hay) was a successful experiment with excellent results in terms of stability and firmness. We’re cobbling together a set of components and methods that can start to exceed expectations, it could become better each year, continuing to gain momentum.

Implementing the large bales required us to uses machinery–a skid loader, which is like a forklift. Dry the bales weigh over 850 pounds each so it would have required a small army to place them by hand; from the stand point of manual labor the large bales require less man power if you have the right equipment and a skilled operator. However since you’re using a larger brush the strokes are more gestural, less about detail. 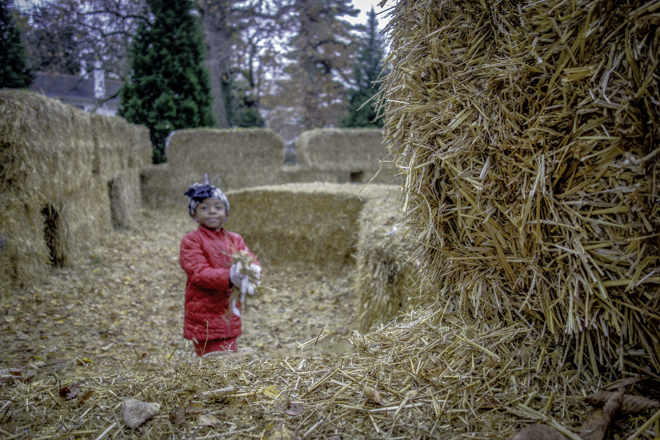 NP: What’s the inspiration for the design? Is there some kind of maze from the ancient world you’re using as a guide?
PB: No doubt ancient ruins have influenced the form. Once we decided to use the big boys, we needed to invent a vocabulary. “How do these blocks of straw work together to make words and sentences?” We challenged the notion of “maze” as being path driven form. It’s not a maze in a traditional sense; we made an open-ended straw apparatus that has maze like parts, offering challenges that are richer than walking a path at grade. Users are invited to move over, under, on top off, between, etc. engaging a full set of motor skills.

Ironically, three little toga-wearing pigs paid a visit after completion. Just my luck–I forgot my phone (camera) in the car. They wondered aloud if it would hold up to the huffing and puffing.

NP: What’s the history of mazes? It feels to me like something from the 12th century, but perhaps its something humans have built since they could differentiate between being on the right track and being lost…
PB: Some believe Greek mythology introduced the labyrinth, which was intended to contain the Minotaur. However labyrinth designs can be found within many cultures through history, some are over 3,000 years old. So it is a debate as to who invented them and when. A traditional labyrinth has a single non-branching path and usually not intended to be difficult to navigate. Unlike a maze, which is intended to have branching paths and choices. It’s intended to be a challenge, to be entertaining, puzzle like. The garden maze became popular during the Renaissance and I do remember something about the about Egyptians building maze like pathways within tombs but it’s all a little mazy right now…

Hmmm, perhaps this installation is closer to a labyrinth than a maze, shhhh, let’s keep in between us okay?

NP: Who seems to love it more, adults or kids?
PB: It’s hard to say, if I had to choose I would say the kids–gosh I hope the kids like it? Although I have yet to see any texting, email checking, or taking calls in the maze, something is holding their attention for more than five minutes.