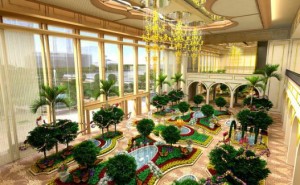 The Inquirer’s Jennifer Lin is some kind of a quote magnet.

Here’s what found its way into her reporter’s notebook yesterday, during the announcement of Bart Blatstein’s proposed Provence casino resort on North Broad Street, which would be the city’s second (that license, once granted to Foxwoods for a site on South Delaware Avenue is now up for grabs). Read Lin’s report on the proposed project HERE.

City Council President Darrell Clark: “Jobs, jobs, jobs. This is what it’s all about. [A second casino] is the most significant economic opportunity for the city of Philadelphia.”

Bart Blatstein: “I could build four of these projects with the money that is being offered to me.”

Where to begin, really?

Well, let’s start with Bart, who is certain that his proposal for a journey to France-themed casino resort will win the city’s second license. This may be the usual Blatstein bluster, but the statement strikes me for a different reason, and I’m not sure it’s all bad: the city finds itself attracting stupid money.

Yes, it’s for a stupid thing–I am not arguing on the merits of casinos or this project–but hot cash is a sign of a place in play. And moreover, all cities build stupid things.

That doesn’t mean, of course, those stupid things should be at the center of the city’s economic development strategy. I suspect Darrell Clarke didn’t really mean what he said yesterday–he was probably a little light-headed from the lavender scented air of Provence–but if the second casino is really any more than a small part of the city’s larger economic strategy then we really are being taken for a ride.