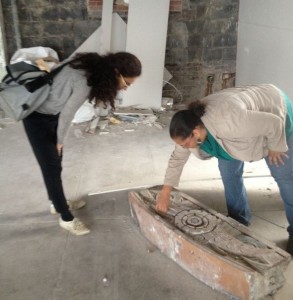 Editor’s Note: For the next month, Hidden City hosts visiting curator Nini Palavandishvili from Tbilisi, Georgia through an award from international arts organization CECArtsLink, which supports and produces programs that encourage the exchange of visual and performing artists and cultural managers in the US with 37 countries and regions around the world. Palavandishvili serves as Curator of GeoAIR, the Georgia Art-in-Residency program. The organization creates interdisciplinary art projects in architecture, anthropology, and urban planning. In addition to working in Georgia, GeoAIR organizes projects internationally, including in Poland, Germany, Turkey, Armenia, and the Netherlands. Here, Hidden City creative director Lee Tusman interviews Palavandishvili about her most recent project with GeoAIR, “undergo. the parallels,” a project held May 24 – June 3.

Lee Tusman: Your project activated nine overlooked soviet-era underground pedestrian passageways for public art projects. What made you want to use these spaces for public art projects?
Nini Palavandishvili: I’m a pedestrian, mainly. I don’t drive a car. I use public transportation and I walk a lot. So I use these passageways, but I was a rare example of someone using them. They’re very interesting. There are small ones, long ones, interconnected ones, ones with nothing attached to them-all different, a product of Soviet utopian thinking. In the 1990s, few people used them, because there was no electricity in the passageways, and really in the country. They became places for crime. Later on, teenagers went to gamble there. Street musicians stayed there. Some people even had illegal shops for years. And many passageways changed their appearance as people constructed without permission. They made shopping kiosks, doors, etc. illegally in these spaces, using every corner. Afterwards, cities started to control them in the mid-1990s, to control and regulate them, and gain the profit. 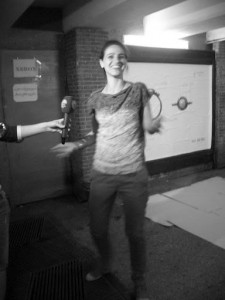 One of the main interests for me was that street people used these as bathrooms, but it made it so that many people didn’t want to go there. I realized once I went to Germany that none of the Georgian passageways were handicap-accessible, typical of Soviet societies that believed they were building “healthy” societies without the sick. In Soviet times, you didn’t see such people, as if they didn’t exist. All these observations were interesting, and showed the history of the society. One of the biggest underground passages, in the main square of Tbilisi, was built in the 1980s, and it was the first one planned as an underground shopping mall, with shops, cinemas, exhibition space, projection rooms, but it was never finished due to the events of 1989, so it became sort of a phantom space.

LT: Since some of the spaces were privately-controlled, and others were City-owned, how did you gain access to them?
NP: All of them are still city-owned. Some of them are rented out privately, but they are City-owned. Now, actually, communicating with the City–that was another project! I was able to do this project because GeoAIR is a partner with Eastern Partnership Culture Programme (an EU program), so with this support it was much easier to gain access and convince the City to let me do the project and to co-finance this project. The EU provided 80 percent of the finances and we just needed to find an additional 20 percent. First I approached the Ministry of Culture and Monument Protection of Georgia, and with their support, they collaborated with the City and asked them for support. So now I had access to City Hall, and now I started a whole inquiry and negotiation with the City. I had already listed all of the underground passageways I wanted to use. They have lots of smaller offices which manage separate things. For underground spaces, there is a special department, Property Management. For security, there is another department. Again, there is the Cultural Department, and they were supportive through my contacts. I think they thought I was crazy, but because I had support from the EU and the Ministry of Culture, they listened to me. Everyone was asking why I wanted to go into these dirty, stinky places, instead of “good” places. 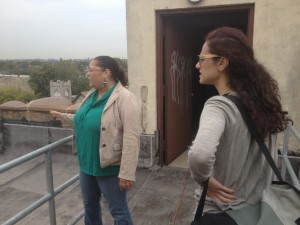 LT: That’s something we at Hidden City deal with, where people are sometimes embarrassed about dirty, vacant or otherwise overlooked spaces. They’re almost afraid of this “dirty laundry.”
NP: Well, they don’t want to reveal it. They have to take care of all these things and they are embarrassed and ashamed that their property is not in proper condition. So they also try to convince you to change your mind instead of helping you, like providing cleaning. It’s easier for them to try to convince you not to do these things.

I was lucky, I convinced City Hall to work with me. I went to property management. I brought them the list of venues I wanted to animate, and they were helpful in giving me the contacts of the people managing those spaces. But at the moment I was about to start the project, one of the passages was about to go into a new private ownership. I really needed the walls, and everyday I was calling back and forth. So one day, I just decided not to call anymore. It was five days from the opening, so I just did what I wanted to do. It was a risk. The next day there could be shops installed. This was the only case that I didn’t get permission, because the temporary owner wasn’t really being cooperative.

LT: So you went and installed anyway?
NP: I installed, and three days after it opened, with the project and the works in it, they deconstructed it! And I have documentation of it. 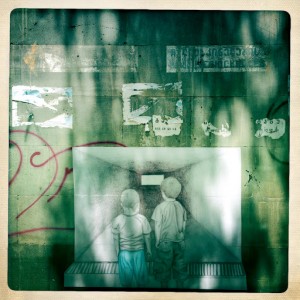 LT: Was it still a success?
NP: Actually, this was one of the main successes for me, because no one realized there was new artwork on the walls! On one side were decorated panels with historical places and poems of Georgia. On the other side it was left blank which huge panels. And I had one artist install his daily usage of objects as his art form, archiving his tools as if they were part of an art or historical registry. For me it was interesting because when you come up from the subway you have two national archives that have huge collections, including the gold treasury. So this collection was very interesting to me in contrast. We had many prints on this wall, and few people realized this was a new artwork. There are lots of unofficial sellers in this passage, like a woman that comes there everyday. We had left a panel next to this woman blank so she could use it to sell her things. When I came back, she had put her goods in front of the panel with the artwork, instead of her own. When I asked her why, she said it had better lighting than the blank wall!

LT: What was the public’s response to the works?
NP: Really positive. I had many people that started using the passageways. They were motivated to explore them because of the artwork installed in them. For me, one of the most positive achievements was collaborating and communicating with the people that work in these spaces, that use them daily or are tenants of these spaces. I wanted to work with them, not interrupt them or bring them something they are not interested in. We always tried to be in dialogue with them. In most of the cases, it appeared that they were excited to collaborate. In one of the spaces, a bakery even provided daily pastries to our artists, free. In another space, there were many beggars, and they started to help install the project. In a passageway where we held the opening, a small shop provided us with electricity. We didn’t do catering for the opening but encouraged our visitors to go to that shop for refreshments, so they actually made a profit. Artists come and go, but these people stay there, and they’ll continue to take care of these spaces. My main goal is never to do just an art project but to get in touch with people and to get people to start paying more attention to their surroundings, to be more attentive to other people and spaces. Art, for me, is the language I use to do this.