From Lincoln High’s Gym To A Kitchen Floor, The Drama Of Salvage, Part 2 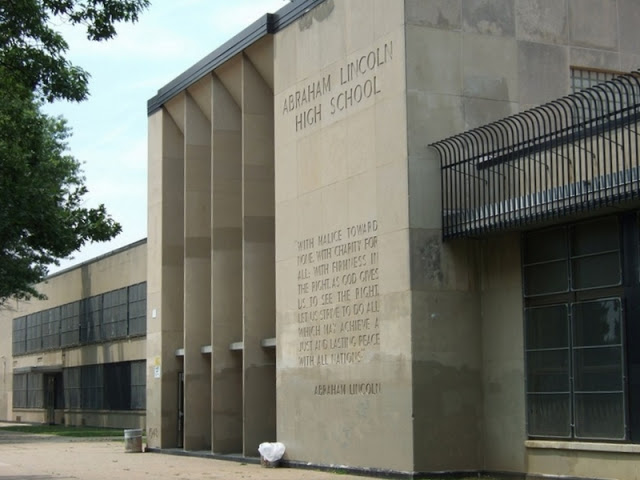 Editor’s Note: We asked contributor Jacob Hellman to write about his experience salvaging and reusing the gym floor of the demolished Abraham Lincoln High School in the Northeast. While contractors regularly use salvage wood in all kinds of building applications, for the DIYer, the process can prove to be difficult and even more costly than buying and installing new flooring. (Experienced builders say pulling up an old floor, removing the nails, and refinishing it is more cost effective than buying and installing new.) This is part two of his cautionary tale. For part one, click HERE.

Earlier this month, I told the story of how I acquired 800 square feet of salvaged flooring. I’ll now explain my problems installing it, and visit two other Philadelphia homes where sections from the same gym floor now reside.

Provenance Architecturals, purveyor of my reclaimed flooring, recently made the New York Times for a different act of reclamation: the salvaging of the Coney Island boardwalk, a story told first here on the Hidden City Daily. The Times article, part of the media wave surrounding the new Barnes building, opens with this: “The wood has a story to tell, of an odyssey that began by the ocean.” That wood was century-old tropical ipe from the Coney Island Boardwalk. Provenance had gotten word of the renovation of the boardwalk there, bought the old material, had it re-milled in Lancaster County, and it’s now underfoot in the Barnes’s lobby.

What Provenance acquired was large structural timbers; after re-milling, the installers at the Barnes had floor boards that fit together as if they were new. What I bought was old flooring, pulled up from Lincoln High School, in Northeast Philadelphia, during its demolition in 2010. Old black adhesive encrusted the tongues and grooves, nearly crippling my installation process.

I began to prep the material two years ago, sitting on my floor with a hand scraper, holding each plank between my legs. With a heat gun directed along the tongue, the old adhesive softened, and slowly peeled away as I scraped. But forceful repetition caused back cramps, the adhesive quickly blunted the scraper’s edge, and I burned out three heat guns. After months of sporadic effort, I tried a table saw: I ran a plank through it, blade height exactingly positioned, to shave the adhesive from the grooves. On the first pass, the blade sparked, and, examining it, I found its teeth visibly blunted. 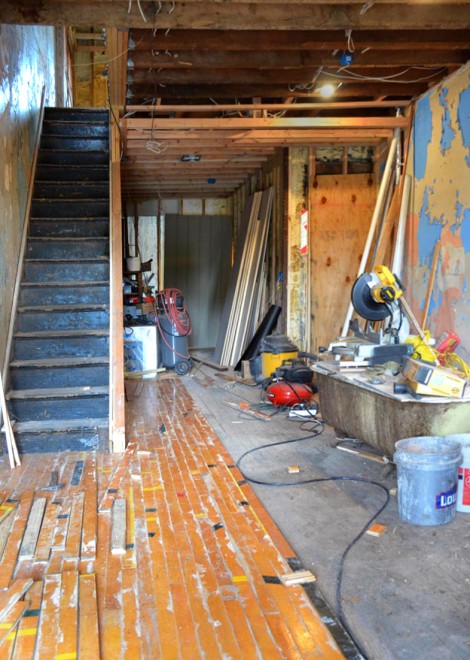 A few seasons passed before I tried again. Last spring, I picked up a gallon of stuff called Kwik-Strip, a strong admixture of solvents. Working outside for ventilation, I brushed it on and waited. Then, with deep tactile satisfaction, I ran a scrapper blade down each plank and watched the gel-ified adhesive fall away. I worked for two days, wearing a respirator designed to filter VOCs, but began to feel a subtle assault on my central nervous system. When a beer with dinner pushed that feeling into nausea, I was moved, for the first time in my life, to consult a Material Safety Data Sheet–the dense health documentation OSHA requires chemical manufacturers to provide with their products. In the section addressed to doctors, Kwik-Strip’s MSDS explains that its primary ingredient, methylene chloride, competes with alcohol in the body’s metabolism pathway. Clearly, my respirator hadn’t worked, and these two toxins had overwhelmed my liver and now lingered in my bloodstream.  Eventually, I tried a citrus-based stripper, and was happily disproven in my assumption that non-toxics don’t work as well. In total, I cleaned 3,000 linear feet of floor boards, which are now nailed down and awaiting re-finishing.

Harlan Price is another owner of the old Lincoln High gym floor, and he is definitively not re-finishing his. He fell for the colored lines which zip across each plank–the scattered markings of the basketball court–and purchased the material intending to turn them into a design element. “It’s not perfect, but it’s consistently imperfect,” he observed, looking down at his kitchen floor. “It has rhythm.” Indeed. In peripheral vision, the eye registers evenly dispersed color; focus, and you see that Harlan spaced the yellow zips throughout the room, and grouped the red ones toward the center. As with all good artistry, you feel the ordering principle, but don’t notice why until he tells you. 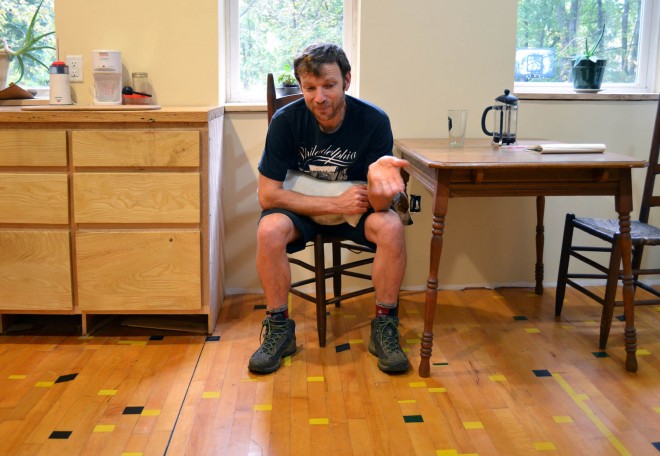 Harlan’s floor boards are butted up tightly. My first question to him: how’d he strip the adhesive? “I went through a ton of router blades”–fifteen is his estimate. “This is why people don’t salvage. It’s a myth,” he says, that salvaging is economical, “but I like salvaging stuff.”

Harlan belongs to a sort of de facto cult of house renovators: people for whom restoring Victorian trim and planing old joists into stair treads is not just a hobby but an artistic compulsion. Like me, Harlan started out hand-scrapping the flooring. “But this is dumb,” he soon realized. “I can definitely become OCD. It’s easy to burn yourself out playing with recycled material. The result is great, but it’s so much labor.” 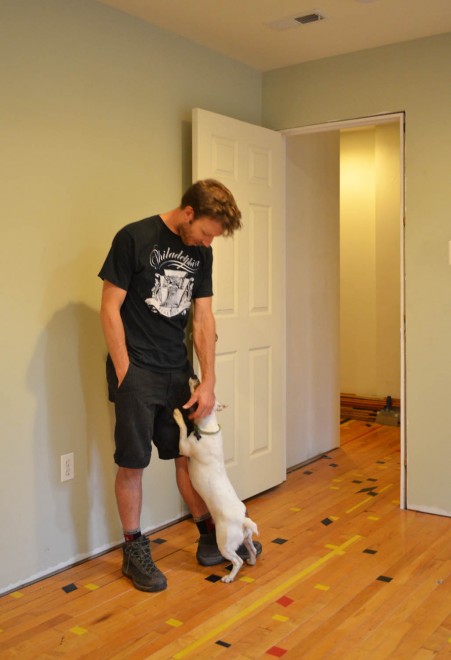 Mira’s house is the South Philly outpost of the Lincoln High gym floor diaspora. Her circumstances forced her to be less fussy than Harlan or me. She was refinancing her house, also a long-term renovation, and had an imminent inspection. The floors had to be done. Gaps between the planks? “She just didn’t worry about it,” said Harlan. “That’s the fun part about working with salvaged stuff–you’re working with its limitations. The fewer limitations you’re willing to accept, the longer you’re going to spend on it.” 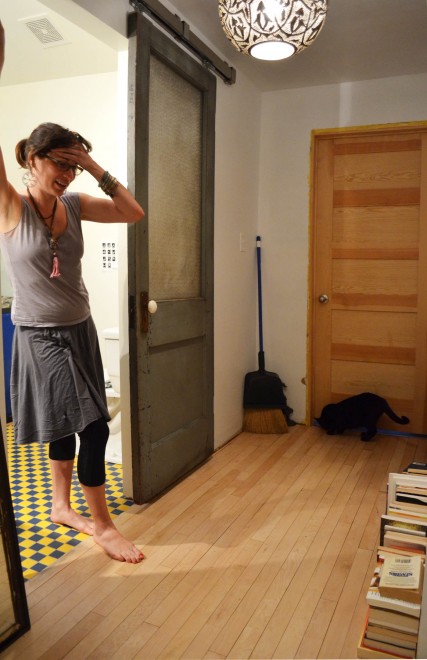 I arrived at Mira’s last week expecting to notice black gaps between each plank–but the eye of the visitor sees the big picture, and the floor looked gorgeous. I immediately regretted putting so much effort into prepping mine; you simply don’t notice the gaps. Harlan’s floor looks as he intended it to: an element of his dwelling that channels its exotic origins. Meanwhile, after re-finishing it and coating it with a matte polyurethane, Mira’s floor has become a different animal: lighter-toned, less aggressive, more domestic. It’s a lesson to generalize: don’t obsess. It’ll still look good.