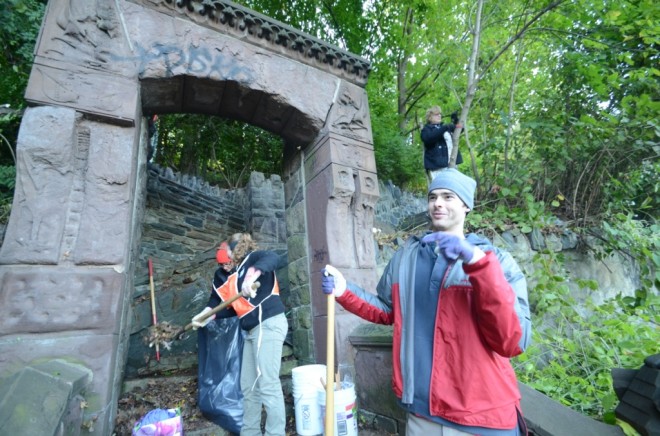 Unknown to all but a few joggers, taggers, and architecture buffs, an ornate brownstone archway marks the base of a meandering stone pathway leading a steep hillside alongside Kelly Drive in the shadow of the Strawberry Mansion Bridge. It’s one of Fairmount Park’s most enigmatic historic artifacts.

If you were visiting Fairmount Park or Laurel Hill Cemetery in the late nineteenth century, you might have arrived via steamship along the Schuylkill River. A pathway would lead you from a boat dock up and across then-pastoral East River Drive to this archway, where a stone fountain fed by a natural spring invited a moment of respite before a steep climb up to Strawberry Mansion at the top of the hill. The brownstone arch itself was worth a moment of pause and admiration. Moved here in the 1880s, it was originally exhibited at the 1876 Centennial Exhibition to promote Connecticut brownstone as a building material. Its designer was the master architect Frank Furness. 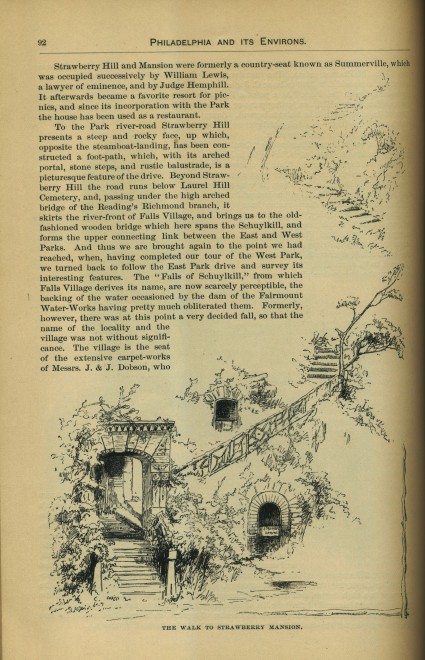 Page from Philadelphia And Its Environs, 1887

Today, the boat dock is long gone, the fountain has been plugged, and Kelly Drive is a four-lane highway. Weeds and brush choke the pathway, and the Centennial Arch is slowly crumbling away. But last Saturday, a group of students from the Penn School of Design’s program in historic preservation joined the Fairmount Park Historic Preservation Trust and the Association for Preservation Technology to give the arch some badly-needed attention.

Weeds and debris were cleared, graffiti was removed, and emergency mortar repairs were made. It was an important first step in what all hope is a sustained effort to preserve and draw attention to this mostly forgotten artifact. 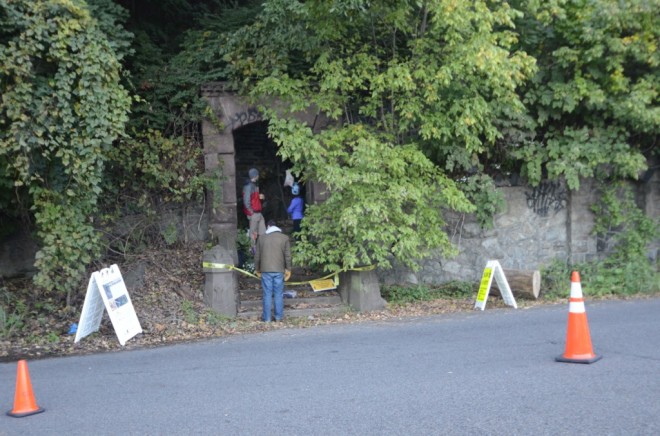 The all-volunteer effort grew out of a report on the arch by Penn student Brett Sturm, who was assigned the site as part of a class on masonry conservation. “My first challenge was just finding it,” he said. He used Google Street View to survey the length of the drive and eventually spied it poking out of the underbrush. “Unless you knew where to look, you’d never be able to see it from a speeding car.” His research led to the discovery of a photograph of the arch from the 1876 Centennial, where it stood across from the Connecticut House, as well as a description of the arch from a fair guidebook:

Another object of interest on the [Connecticut] Cottage grounds was the grand portal or gateway of Portland stone, of massive yet graceful design, and elaborately cut. This was one of the finest finished works that was ever made of this stone, and illustrated the many excellent qualities which have made the material a favorite with builders throughout the entire country, not only for its texture and handsome color, but its durability.

The irony of this last sentence was not lost on Sturm, whose report also documents in meticulous detail the arch’s subsequent deterioration. Portland brownstone is a sedimentary sandstone that forms with “bedding layers” roughly akin to the wood grain of timber. Unbeknownst to stonemasons and carvers of the time, stone set with these bedding layers oriented vertically was far more prone to erosion than stone set horizontally. The Centennial arch is a textbook case: the intricate ornament along its cornice is virtually intact, while other carved details have disappeared entirely. It is a pattern seen on brownstone buildings across the city, including Furness’ Fisher Fine Arts Library. 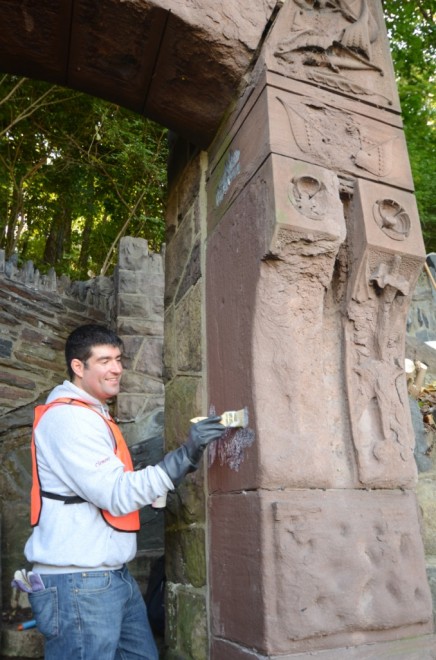 According to Fairmount Park Historic Preservation Trust conservator Lauren Drapala, herself a graduate of the Penn program (and Hidden City Daily contributor), the arch presented a perfect opportunity for both students and professionals to get hands-on conservation experience. “Too often, we see a disconnect between the people writing the specifications for historic buildings and the people actually doing the work.” Though the Penn program does include a hands-on component, both Drapala and her volunteers see boundless opportunity for more independent projects like this, both in Fairmount Park and across the city.

As the volunteers worked, a police officer stood nearby directing traffic for a regatta taking place on the river. “That’s a great thing they’re doing,” he said. “I never noticed that there before.”