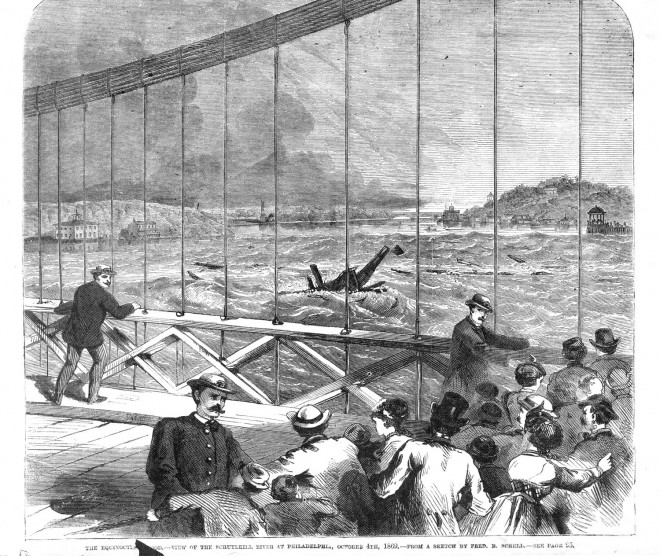 Flooding is on everyone’s mind today, as we see frightening pictures of the Atlantic City boardwalk being broken up by the storm surge of Hurricane Sandy, and this more than eight hours before the storm is due to make landfall. What effects the storm will have on Philadelphia’s two rivers, both of which are tidal, remains to be seen. I am not a meteorologist, and no expert in regards to storm surges or hydrology. My field is history, and so that is what I offer on this ominous day.

Of the city’s two rivers, the Schuylkill River is narrower, with a steeper valley, and the most prone to overflowing its banks. The worst flood in the river’s recorded history occurred on October 4, 1869, after a summer-long drought was broken by days of rain. The torrent of water rose eleven feet over the Fairmount Dam, reaching within a few feet of the wire suspension bridge that spanned the river below the Fairmount Water Works, about where Spring Garden Street crosses today. Whether that record remains standing after Hurricane Sandy passes remains to be seen. To keep track of the river, the USGS has an instantaneous stream gauge, statistics from which can be viewed at HERE.

As of this writing, the river is rising.

Depending on how much rain Sandy brings, and how hard and where it falls, this may also be a day that some of the many streams in the city that have been channeled into sewer pipes might make their way back to the surface, as the sewers fill up and overflow. If you see a river flowing down the street, please give it the same respect as any overflowing “living” stream and stay away.