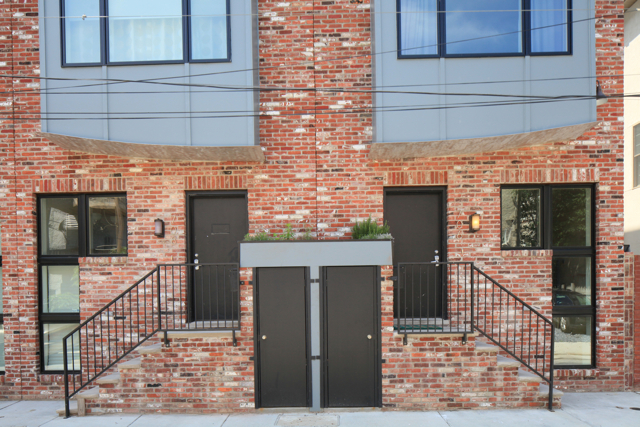 Since the early 1990s, what’s become known as “Home Depot doors”–bare bones metal safety doors and their cousins, the faux-six paneled doors–have been the norm for new construction. Since they are so ubiquitous, we are compelled to think about other aspects of the design of the front entrance: stoops, lintels, recesses, transoms–or the lack thereof. But the door itself ought to be integrated into the design of the building and though solid wooden doors are expensive, the investment in an appropriate front door often indicates a seriousness of architectural intent. In that regard, a solid, flat metal door is the easiest way to punctuate a contemporary row house design.

A.  These recessed doorways are an unusual design choice in this neighborhood. The open vestibule could be seen as functional, providing shelter from the elements while entering the building, as well as a good place to keep umbrellas and snow shovels. However these benefits are not without significant drawbacks. Anything left near the door would be a target for theft and being out of the line of sight while opening the door is an invitation to muggers.  The slate-topped steps are a nice touch, but the lack of a lintel gives the doorway a half-finished quality. 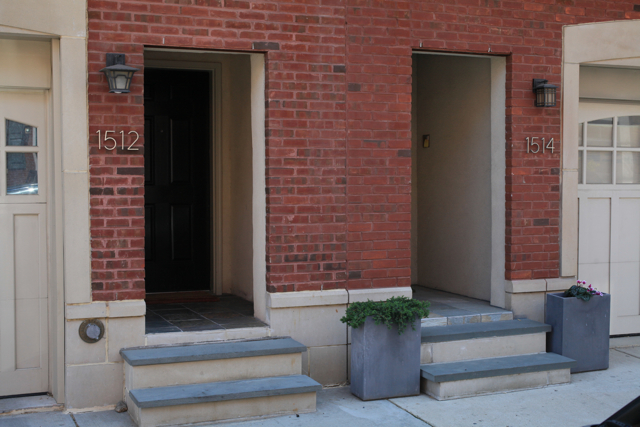 B. Nothing says “welcome home” quite like this. What happened to the step up to the front door? These doors are more like cutouts that appear to hang in space. No lintel over the door either, just a row of vertical bricks. 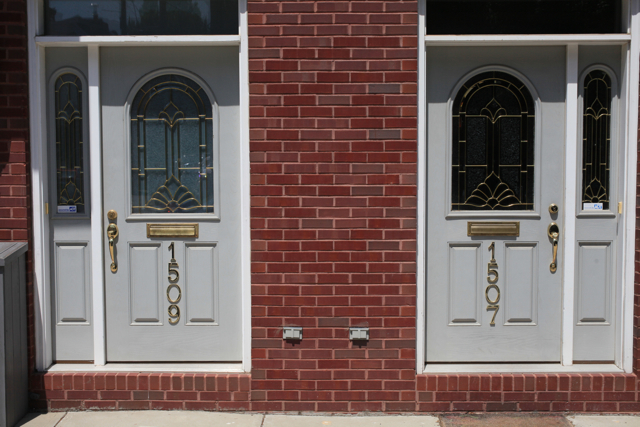 C. Faux-colonial details like the pediment above the door on the right are almost as bad as the bare-bones door on the left. The pediment is all the more obviously out of place in a city where there is so much of the real thing, especially with a garage covering three quarters of the facade at street level. 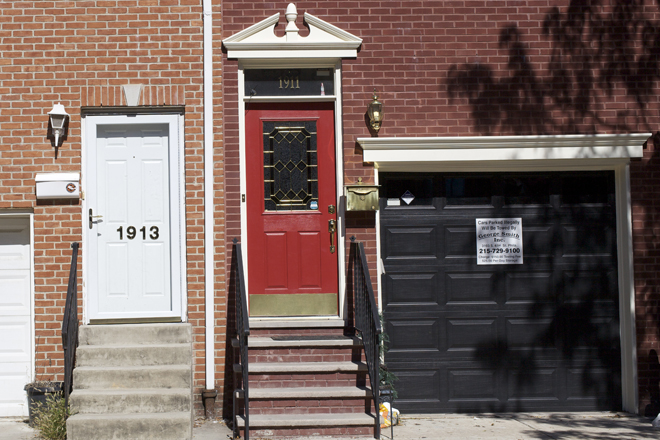 D. Colonial looks a lot better when the entire facade is designed in that style. This example makes far more of a commitment than most contemporary colonials, but undermines the effect by putting in a side-facing stoop with modern railing that is noticeably plain in comparison to the richness of the detailing around the door and windows. 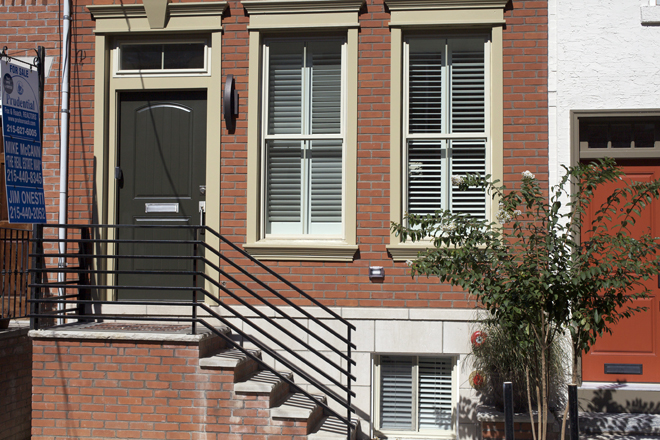 E. Here’s a real novelty, rounded rather than rectangular steps.  The shape and placement of the first floor windows are unusual as well, but different doesn’t mean better in this case. Still, it’s nice to see something that’s usually taken for granted called into question. 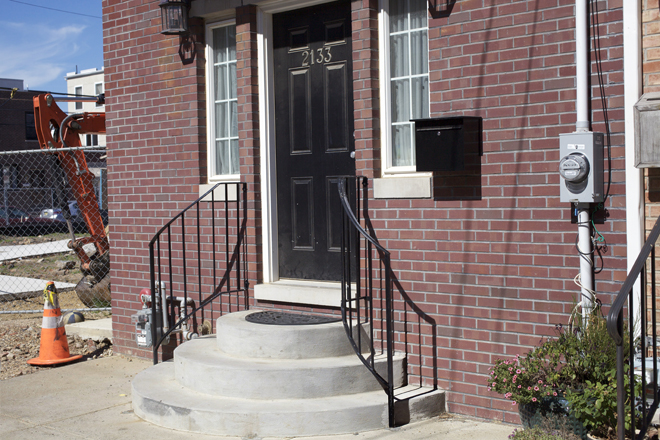 F. A little color can really liven up a doorway, yet the vast majority of doors on new construction are black, white or gray. No doubt builders choose neutral colors to appeal (or at least not offend) the greatest number of buyers. Hopefully, homeowners will add a little more variety over time, as this  one did.  After he painted the grille work, trim and door, several neighbors followed his lead painting their doors as well. 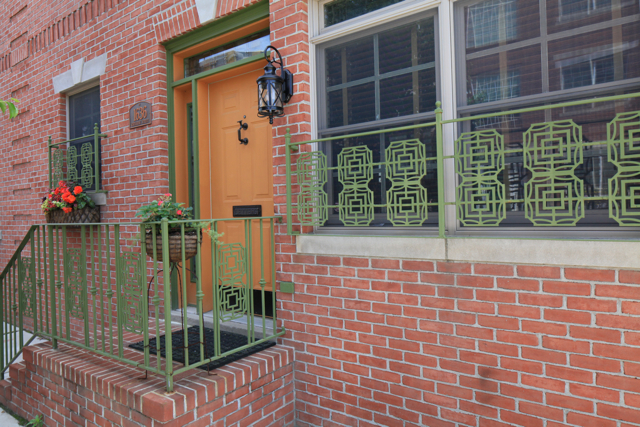 G. We haven’t done an official survey, but it seems as though more than half of new construction in G-Ho features a side-facing stoop.  That’s too bad: people rarely sit on them since they don’t face the street (not that many people sit on front-facing stoops anymore anyway, but it is a Philadelphia tradition). The taller the side stoop the more aggressive and private it feels. These are of medium height and relatively inviting. 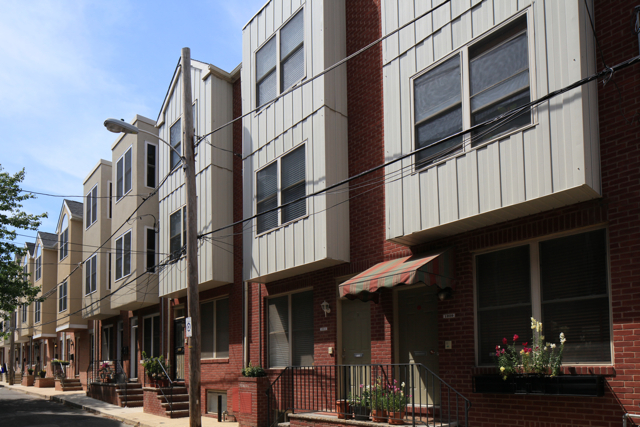 H. With its black brick and green rail this is one of the most attractive stoops we’ve seen, yet at five steps it’s on the tall side and it dominates the narrow sidewalk on this small street (Pemberton) in a way the older stoops did not. 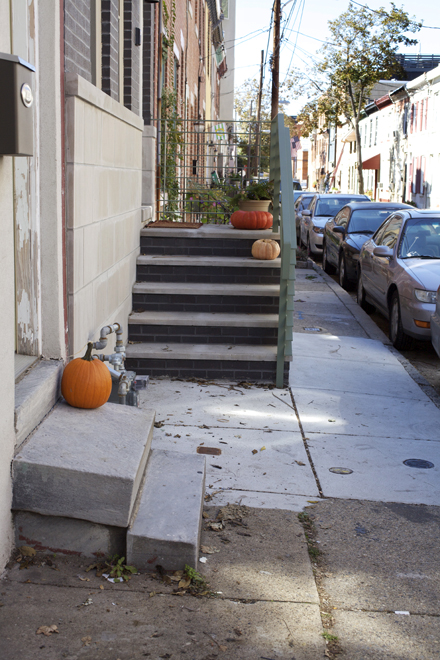 I. This is one of the more elegant door treatments, particularly in the context of a relatively traditional brick aesthetic. The doors are attractively minimalistic and the limestone (or faux-limestone) border creates a muscular pattern. Even so, despite the building numbers and the lights next to the door, the lack of steps combined with the doubled garages make it seem more like the back alley entrance. 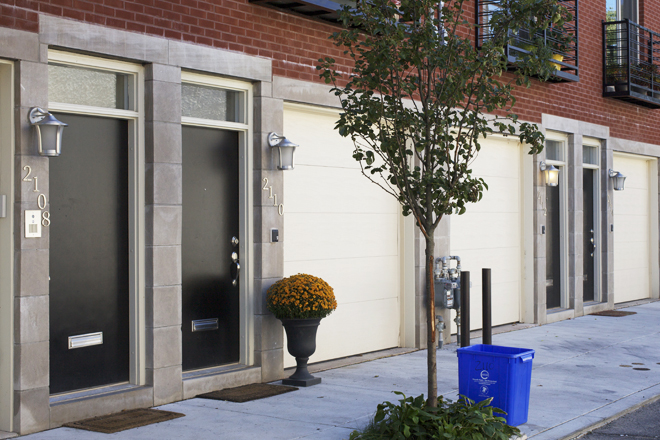 J. This stoop, on a high end project where the architect had both space and money to work with, is very appealing. It feels like a modern twist on traditional Philadelphia row house architecture. The gradual incline of the steps–a rarity in new construction–creates a gracious feeling. 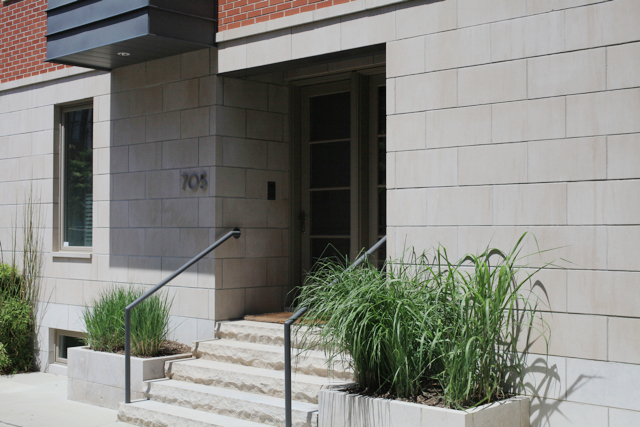