Even Accidental Geography May Be “Destiny” 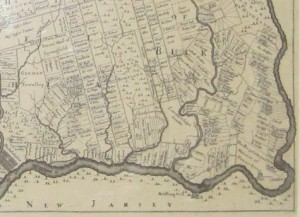 The writer Adam Gopnik has a great deal of fun in the most recent issue of the New Yorker with the surge in geographic-determinist interpretations of history, which he calls “space history.”

Recently, scholars have been using space history “to explain everything,” notes Gopnik, “like the ‘naked ape’ anthropology of the nineteen-seventies, sure in its belief that the missionary position in sex explains all of human bonding, the new space history has imperial ambitions. Russians will always want a warm-weather port and will always have a huddled, suspicious culture, whether Tsarist, Soviet, or Putinish. Ideology is mere summer clouds above an unchanging terrain.”

Gopnik is rightly skeptical of singular explanations for anything, especially deterministic ones like geography. Human history doesn’t reduce very well to the scholar’s theory or the book-marketer’s strategy, thank God, and yet it seems one aspect of our human complexity is to put faith in these simplified narratives.

I suppose that’s why they’re so enticing and why we buy books explaining that salt is the mineral that changed the world (it might be!) or why the free market is always right (not buying that one!).

Gopnik finds space history just another way to come up with a story that fits one’s ideological bent or argument. “Geostrategic thinking,” he writes, “seems not just resolutely unfalsifiable but cozily improvised at a moment’s need.” 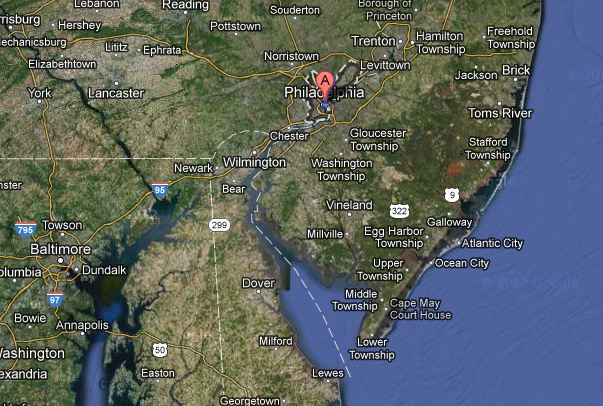 I suspect it also may be fun, and just a little bit revealing, so I’m going to improvise–right now in this fraught moment post-Sandy–and roll out a slightly geostrategic epiphany of my own: THANK YOU WILLIAM PENN for siting this city so far inland from the ocean. It’s not clear he intended to place Philadelphia at such a great distance from the great ocean, but his first choice was Upland (now Chester), certainly very far upriver and his people scoured the tidal Delaware up to Trenton for a suitable site large enough to build a “large Towne or Citty” with a great protected port.

They couldn’t readily find one, so they grabbed what dry, unmarshy land they could and started laying out Philadelphia on the Svenson property just north of Wicaco. When the boss arrived, he couldn’t have been too pleased. His great port was a long, unchartered distance from the Atlantic, and there was no room to grow the street grid. Immediately south and north was wetland–there was nowhere to go (and hence Penn himself sought out the Schuylkill and decided to give his city dual waterfronts). Did Penn think, “what a bunch of amateurs!” and demand to see land closer to the mouth of the Delaware Bay? Or, having traveled all over Europe analyzing the best cities and having lived through the Great Fire of London, did he say, “genius!” 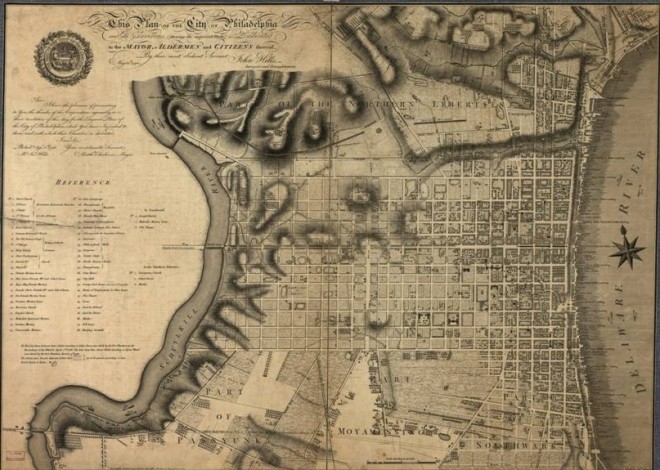 His city would be protected from high winds, surging sea, and certainly, marauders.

Perhaps then we have him to thank–as with so many things (Penn, the man who made the modern world!)–for our subways running today, lights on, schools in session, ships landing at port.