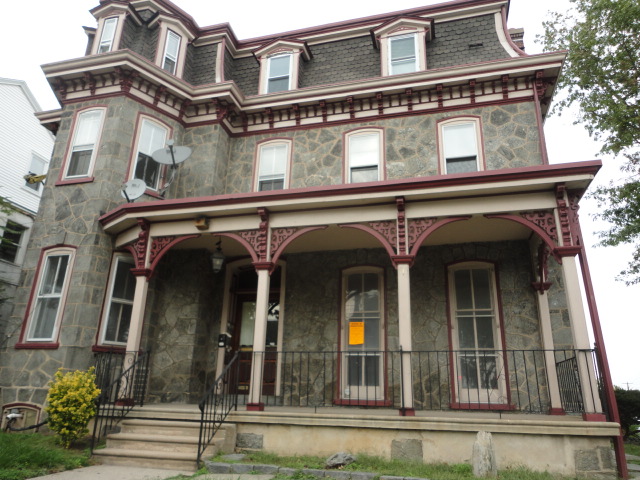 One week after its demolition permit became active, the historic Bunting House remains standing at the corner of Ridge and Roxborough Avenues in Roxborough as negotiations surrounding its fate continue.

New talks between the house’s owners, Frank and Anthony Giovannone, and community groups, led by the Roxborough Development Corporation (RDC), are scheduled for this Friday, October 12.

While both parties have been receptive to compromise, the negotiations have also been marked by fits of tension, with advocates for the house citing a lack of communication and the owners asserting their rights as property owners.

At least two fair market value offers on the property were presented to the owners after the initial talks the week of September 24. One came from the RDC itself and another from Innova, a construction management firm. Another rental offer from a group of local medical professionals was posted on the public forum Phillyspeaks.com. 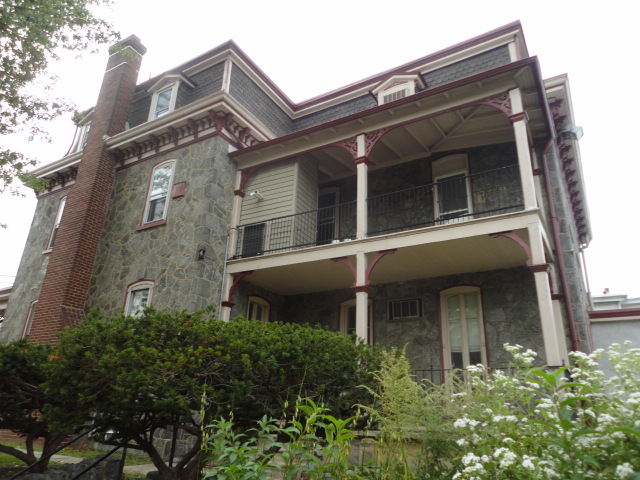 Jeffrey Allegretti, principal of Innova and a former board member of the RDC and the Wissahickon Neighbors Civic Association, said he made his offer with the confidence that the house is “certainly not beyond repair. The owners admit as much.”

Asked to comment on the negotiations, Frank Keel, the spokesman for the Giovannones, said in an email that his clients were “cautiously optimistic” that both sides could strike a deal to preserve the house, but added that “the few early offers they have received and reviewed have not been promising.”

Keel declined to elaborate on those offers, saying, “The Giovannones are appreciative of the deep interest many in the Roxborough community have in preserving 5901 Ridge and don’t wish to dissuade any individual or entity from bringing offers and ideas to the table.”

For many in the community, the Bunting’s looming fate brings back memories of another former neighborhood landmark, the Dearnley Mansion, which met the bulldozer in 2005. Despite opposition, which included the involvement of then District Councilman Michael Nutter, and a month-long halt to demolition, activists were unsuccessful in swaying the developers.

The Giovannones originally planned to tear down the Bunting House and leave it as a vacant lot. They later told the RDC that costs to repair the structure would be too much to yield a profit from it as rental property.

The owners agreed verbally to the truce Wednesday morning. However, later that day, Keel told the RDC that there was no deal until legal appeals were withdrawn. By Friday, September 28–the day after the permit became valid–they entered into a written agreement with the civic associations to halt demolition for 30 days. The civics, in turn, agreed to a freeze on legal action, but did not drop the appeals outright.

The RDC has retained the services of Hal Schirmer, a zoning attorney and former realtor who has worked on previous preservation cases, including the Dearnley Mansion. Schirmer told me he believed a valid appeal of the demolition permit can be made. It’s a case, he said, that turns on the definition of acceptable use for a property found in the new Philadelphia Zoning Code.

“If you look at the table of acceptable uses, ‘vacant lot’ is not accepted,” he said. “Therefore it’s not a permitted use and you’re required to present before the CAs and request a variance.”

However, Schirmer emphasized that no appeals will be pursued during the 30-day agreement. Appeals to the Board of L&I Review and the Zoning Board of Adjustments, and an emergency injunction to block demolition until appeals are heard, would only be a last resort after that period.

Because the new Zoning Code–the first for the city since 1963–only took effect in August, a legal strategy on the acceptable use provision remains untried. Ben Leech, advocacy director for the Preservation Alliance of Greater Philadelphia, said that the change concerning acceptable use was a matter of more explicit language than in the past.

“It’s really an untested argument,” he remarked, “but it sounded like it could be a potentially pretty exciting one to make.”

On the other side of preservation efforts is the viability of nominating the Bunting House to the Philadelphia Register of Historic Places.

A successful historic designation would require approval from the Historical Commission for any future demolition. However, it cannot be used to rescind a permit from L&I that is already active. Therefore, negotiations with the owners, and continued publicity, are the most viable options in the short-term, as most of those affiliated with the RDC have acknowledged.

Schirmer, the attorney, viewed a nomination as a step to applying for state or federal historic tax credits, which the developers could find amenable once they realize the benefits.

“Financially, the tax credits are going to be part of the deal,” he said. “Anyone who’s investing money in a house will find a historic designation attractive to cover the higher risk.” 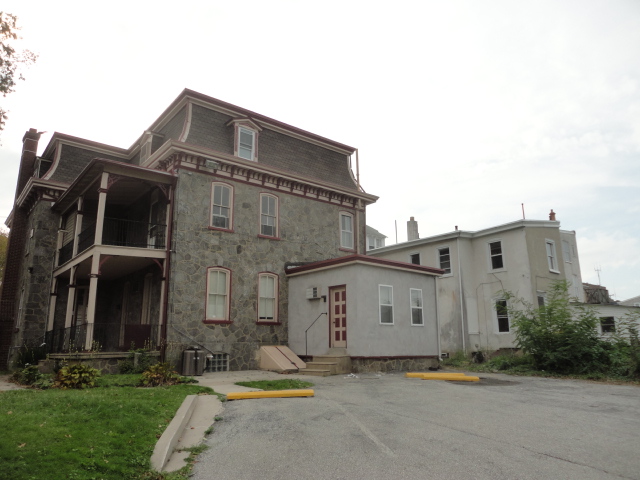 Allegretti, whose company has done many restoration projects making use of tax credits, cautioned against the high transaction costs involved in obtaining them for a single house. However, he felt that they “could be a possibility for a grand re-visioning of the place as part of a larger retail development”–likely involving the three next-door properties (5905, 5907 and 5909 Ridge) that the Giovannones also own.

The historic nomination form contains three major components: a plot plan detailing the property’s boundaries, an architectural description, and a statement of significance. The commission includes ten possible criteria to be satisfied for a building to be deemed historically significant. Ideally, a “well-rounded” nomination embodies at least three or four criteria listed.

On the surface, there are at least three criteria the Bunting House could satisfy: association with the life of a significant person in the past (the home of Dr. Ross Richardson Bunting, a widely published physician and founding trustee of the Roxborough Home on Leverington Street, who is also buried nearby); distinguishing characteristics of a distinctive architectural style (the Second Empire style from the 1880s, with characteristics including a stone facade, three-story bay and mansard roof); and being a defining visual feature to the neighborhood (having stood along a major neighborhood thoroughfare for 130 years). 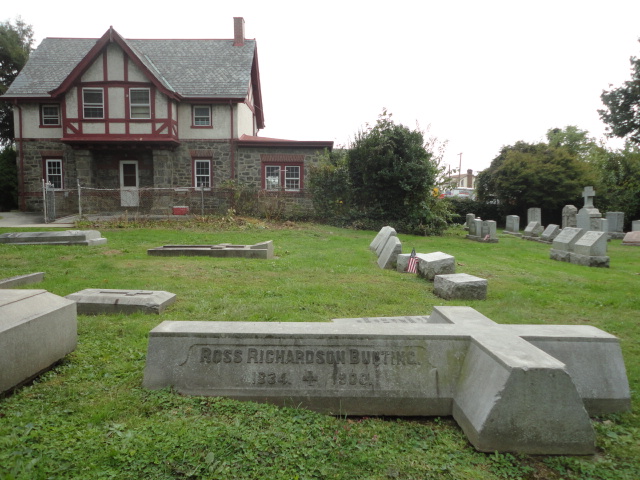 Still, almost all interviewed agreed that the real unknown in the process was the Historical Commission’s willingness to consider the nomination. Operating on a limited budget and insulating itself from political influence or pressure, the Commission can be stingy in the time it takes to research the findings presented in new nominations and to call a committee hearing to approve them for inclusion on the register.

In practice, these hearings occur twice per year on average, according to Leech at the Preservation Alliance. He said it was partly a matter of accumulating enough legitimate cases to warrant a full meeting, so as to guard against superficial nominations that will likely be rejected. Exclusive nomination hearings are rare, but not unheard of. The case of the Church of the Assumption, for example, received loud enough publicity to trigger a special hearing of its own.

One of the strongest voices in nominating Assumption prior to demolition approval was Andrew Palewski, an architect and member of the Callowhill Neighborhood Association. With the help of two colleagues, Palewski was able to produce a nomination in a single weekend. Two months later, the Historical Commission voted to approve the nomination.

This action, however, served to escalate legal tensions with Siloam, the church’s owner. Approval to demolish based on financial hardship was nevertheless granted by the Commission, but following a reversal of the decision by the Board of L&I Review and a subsequent appeal by Siloam to the Court of Common Pleas, the nonprofit sold the church to a for-profit developer in July. (The CCP’s ruling last week, which reinstated the Commission’s approval of demolition, is currently being reviewed to determine its implications in light of the sale.)

Palewski said that Assumption’s was a special case, and that the Commission is wary of getting involved when a developer has expressed an intention to demolish.

“The problem is that historical significance is really a matter of opinion,” said Palewski. “So even if a building is historically significant, it’s easy for the Commission to reject a nomination if they’re trying to avoid a conflict.”

The solution, he recommended, was for community groups to take a proactive stance on preservation. “There are plenty of resources available,” he said. “The problem is that most people don’t know about them.”

Leech, of the Preservation Alliance, also highlighted his organization’s work with neighborhood associations to help members coordinate the tasks of researching and delineating the features of a historic property. He added that the Commission is more willing to take on cases when groups with limited resources put together a nomination.

Aside from that aid, he said, “publicity is the best tool for working with developers and persuading the Historical Commission to hear a case.”

At the current pace, Leech estimated that the next such hearing could take place by November, and that the Bunting House could make the agenda if advocates can prepare the nomination in time.