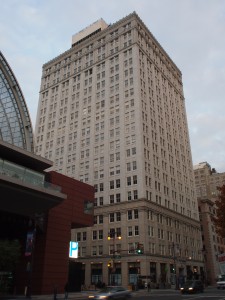 Michael Pestronk, a principal in the real estate development firm Post Brothers, told the Hidden City Daily today that his firm’s reuse and renovation of the Atlantic Building, at Broad and Spruce, will include seven floors–110,00 square feet–of retail. The developers are marketing the space to department stores, large format restaurants, and big box retailers.

Designed by the architect Joseph Franklin Kuntz in 1922 as an office tower for the Atlantic Refining Company, the renovated building will also house about 200 apartments.

In comparison to New York and Chicago, there are few multi-story retail buildings of this nature in Philadelphia, said Pestronk.

“We definitely think there is a strong demand for retail space in Philadelphia from national firms,” he said.

One issue keeping such firms away from Philadelphia has been the configuration of downtown buildings. “The best retailers want to be near to each other on Walnut Street. The problem is that those spaces are only 3,000 square feet.” 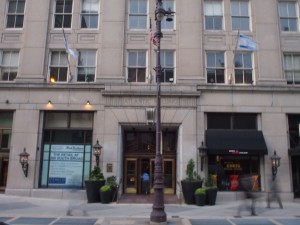 For the Post Brothers, with projects ongoing in Germantown and Callowhill, the Atlantic Building is the first foray into Center City. At 12th and Callowhill, where the firm is converting the former Goldtex factory to apartments, Post Brothers’ confrontation with city trade unions over the developer’s use of mixed union and non-union contractors has reached an “uneasy detente,” with union protests backing off and project continuing, albeit about three months behind schedule. The first tenants should move in in March, said Pestronk.

“No deal [with the unions] was made,” he said. “They decided to stop picketing. But, honestly, I couldn’t tell you what is going to happen.”

That same uncertainly surrounds the Atlantic project. Pestronk said the firm’s usual formula is still being followed. “All things being equal, we prefer to use union. We’ll bid the job out. Our hope is to be able to pick union bids because they will have offered us the best mix of cost, quality, and schedule.” 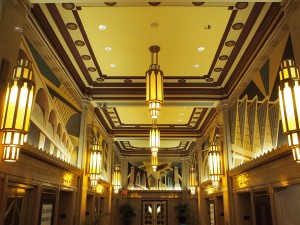 Another challenge facing the project is the issue of retail signage on an historically certified building with facade easements. Any sign proposal will take four to six months for approvals by multiple agencies.

The art deco murals inside the building lobby will be preserved.