At Broad & Arch, Views From A Still Forgotten Tower 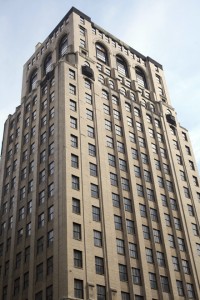 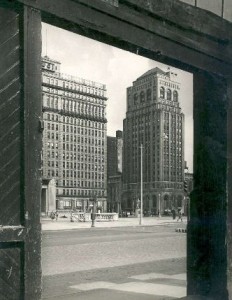 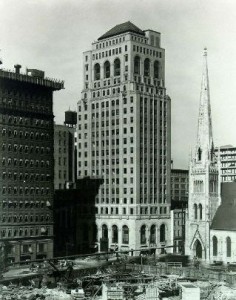 The 1929 Liberty Title & Trust Building at Broad and Arch Streets, the only existing building on the block to survive the expansion of the Pennsylvania Convention Center, remains empty a full year and a half after the enlarged facility opened.

The offices have been vacant since the Philadelphia Water Department moved out in the late 1990s. Until recently, a Dunkin Donuts occupied the street level corner, but it has closed.

The building, designed by the firm Savery & Scheetz, is owned by Realen Properties, who purchased it in 2008. Realen is the developer of the parking garage and retail project designed by Erdy McHenry Architecture being presently completed across Arch Street.

According to its website and previous media reports, Realen plans to convert the office building into a 150 room hotel. But multiple calls to the Berwyn-based real estate development firm seeking an update of the plans went unreturned.

The developer has recently tightened building security, after a spate of break-ins.