A Note On The Silence Of The Morning 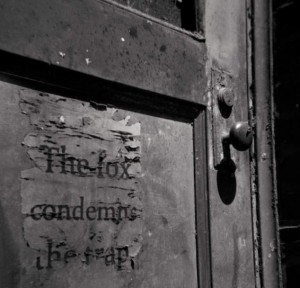 As I write this, I look out the window next to my desk. The sky, for the first time in months, has a pale distance and the trees are tossing in the wind. The cobra lamp, attached to the telephone pole across the street, shakes slightly.

But I can’t hear much more than the whir of car wheels as they pass by and a faint siren to the north, for yesterday as we came to feel the new chill, hour by hour we pulled our windows closed. They had been open for over six months.

The sound of the neighbors’ children playing in their yard behind our house is gone, the sound of the newspaper hitting the stoop, the buzz of the hundreds of birds that live in the dense foliage of the pear trees on the block, it too is gone.

Slowly, slowly we begin now to retreat to our gauzed lives, leaving the street behind. Six more weeks and we’ll stop seeing each other pass by on the street, only glimpses through front windows, warm rooms and televisions, and this year no Red October to keep the street alive.