A Case For An Urban Expressway 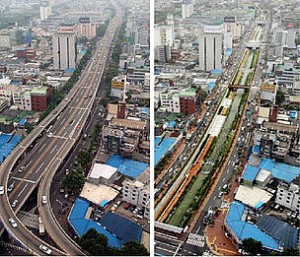 Seoul before and after the removal of a central highway and the restoration of the Cheonggyecheon River | Image: Seoul Metropolitan Government

The movement to eliminate urban freeways has been gathering steam and a number of high-profile supporters, and understandably so. It’s been demonstrated on numerous occasions that freeways and cities don’t play well together, or at least not as well as either freeway advocates or the municipal officials who welcomed their arrival in the 1950s anticipated. Next American City has showcased several examples where removing urban freeways has stimulated the revitalization of urban areas in places like San Francisco and Portland, and earlier this year it sponsored a forum, “Reimagining Urban Highways,” at the Academy of Natural Sciences of Drexel University in which a host of urban officials discussed the positive forces unleashed when urban freeways were removed.

There’s a powerful case to be made for this argument. Urban freeways disfigure large swaths of land, and high-speed car access to urban centers undercuts the ability of mass transit–a more density-friendly form of transportation–to serve them effectively. Society Hill residents fought furiously to have Interstate 95 buried through Center City in the 1960s, correctly seeing the proposed elevated highway as cutting the city off from its waterfront. More recently, Diana Lind, the editor of Next American City, spearheaded a dialogue about the complete removal of I-95 through forums like the one in February.

But just as enthusiasm for urban freeways was overdone, so may be enthusiasm for their removal. Unless we eliminate cars entirely–an unlikely proposition–there will need to be provisions to handle them, sometimes in large numbers, in our cities.

While I agree with Jane Jacobs that we should pursue “the attrition of cars by cities,” “attrition” falls well short of elimination. And furthermore, there are places where adding rather than removing a freeway makes an urban environment more pedestrian-friendly. To understand why, let’s go back to the future and up to the part of town I now call home. 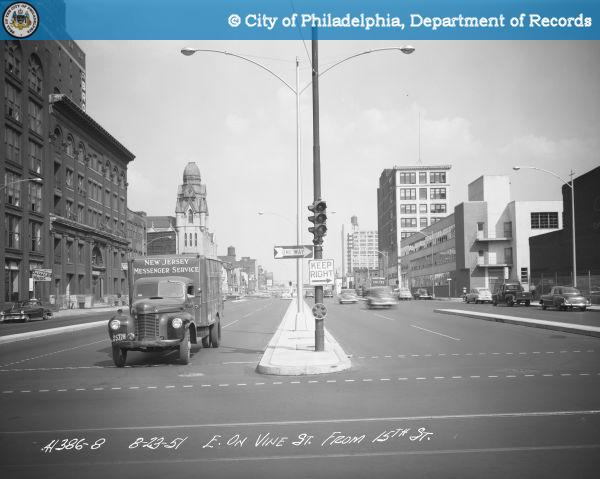 The photo above shows Vine Street after it was widened to 10 lanes east of 15th Street in 1951. While the road is relatively free of traffic in this picture, it would not remain so for long: by the 1970s, it hummed with traffic most of the day, and crossing it on foot was at best an unpleasant experience.

Fast-forward to today, after Vine Street’s center lanes were buried in a trench that extended the Vine Street Expressway across Center City. Those buried lanes took most of the traffic with them, and now, pedestrians can cross Vine Street with relative ease and safety at all but the worst congested periods.

As with Vine Street, so with Roosevelt Boulevard, the central artery of Northeast Philadelphia. A 1950s reconstruction project reconfigured that street as well, turning it into a 12-lane, double-divided boulevard much like Vine Street downtown. The improvements also turned it into a near-expressway, and drivers have treated it as such ever since, to the detriment of anyone who tries to cross it.

The recent installation of pedestrian crosswalk signals at several points along the street indicates that the city understands the hazards of crossing the Boulevard. But the real path to eliminating the hazard lies in doing to the Boulevard what the state did with Vine Street in the 1990s. 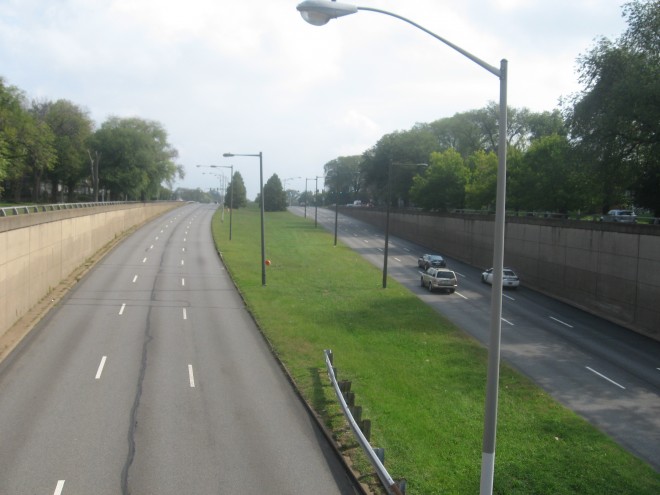 Pedestrians can cross Oxford Circle without fear, for instance, because the inner lanes dip beneath it. Putting those lanes in a trench that runs the length of the street would not only make the existing pedestrian crossings safer, it would open up the possibility of even more places to cross, especially if the submerged inner lanes are covered with a cap. That cap, in turn, could either be landscaped, restoring the Boulevard to something like its original appearance, or–thanks again to the street’s width–it could support mid-rise, mixed-use development that could truly transform the Boulevard into a real Main Street for Northeast Philadelphia.

And as a bonus, that trench could also accommodate the one mass transit project just about everyone agrees needs to be built, a subway for the Northeast. Forget light rail: there is enough demand for transit in the Northeast to justify true rapid transit instead of a half-measure, and a recent cell phone poll conducted by the Philadelphia City Planning Commission demonstrated that if we built it, people would ride.

A Northeast Philadelphia extension of the Broad Street Line remains a key component of the Delaware Valley Regional Planning Commission’s Long-Range Vision for Transit, and the City Planning Commission’s poll helped shape the final form of the recently adopted Lower Northeast District Plan, where the poll results can be found. (Some argue that rapid transit lines in freeway medians still give the car pride of place and an advantage over transit. I suspect a driver stuck in rush-hour traffic on Chicago’s Dan Ryan Expressway while Chicago Transit Authority ‘L’ trains zip by would beg to differ.)

Of course, all this would cost serious money, and cost is what derailed the city’s last serious effort to make this vision a reality in 2003. But the benefits would be well worth the expenditure. All we need to do is put our reflexive antipathy to urban freeways aside. Vine Street showed that such roads can improve the urban environment for all if built right. In the Northeast, we have another chance to do that.