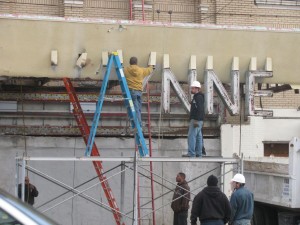 The letters being removed in December 2011. Photo: Provenance Architecturals, LLC

The Wynne Theater’s days are numbered. According to Curtis Cephas, a consultant to Fourth District city councilman Curtus Jones, the long vacant theater is among four properties in the district being targeted for redevelopment. The other properties–vacant lots–are located at 59th and Market, 55th and Poplar, and 49th and Parkside.

The 1,700 seat theater opened in 1928, at 54th Street and Arlington, in Wynnefield, last showed movies in 1955. It was later converted to a banquet hall. It’s best known for the WYNNE sign attached to 20 foot lattice on the roof of the building. The marquis sign below it was removed in December. For our previous report on the Wynne, click HERE.

The city acquired the Wynne when it went to sheriff’s sale this summer. The previous owner, reportedly a family in conflict over the property, had accumulated over $500,000 in back taxes.

Councilman Jones’ office is currently accepting proposals for the site and has already received several inquiries. Because the building has been open to the elements for over a decade, preservation in whole or even in part is no longer considered a feasible option.

Cephas believes that the site is ideal for a mixed-use complex anchored by senior housing. Lafayette Hill-based developer Presby recently broke ground for a a similar project several blocks away. It filled before breaking ground.