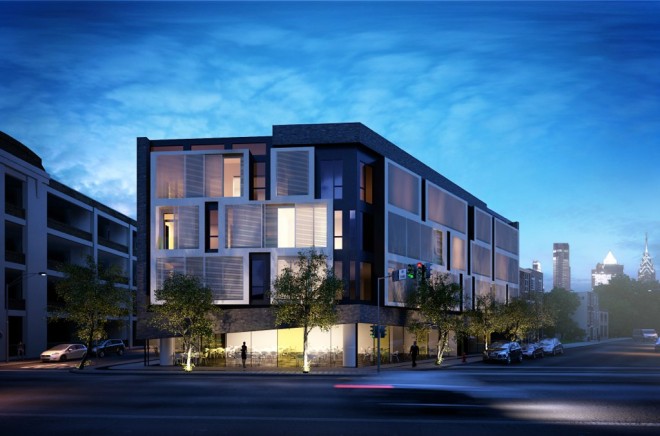 A clearly enthusiastic Zoning Board of Adjustment this afternoon gave final approval to Bloc 23, an ambitiously contemporary 22-unit condominium and retail project at 23th and Bainbridge in Graduate Hospital that will break ground in early 2013. The project is significant in its intentional departure from the neo-traditional housing being developed by Toll Brothers directly next door.

“I think it’s a wonderful design,” said Kevin Gray, the chair of South of South Neighbors Association, at a meeting last week to approve changes in the design (SOSNA had given its initial approval of the project last year). “I think it would be a great asset to the community.”

If the project goes according to schedule, it will be completed in fall next year, around the same time as Toll Brothers’ townhouses. A second phase is in the works for an adjacent site at 611-615 South 24th Street. 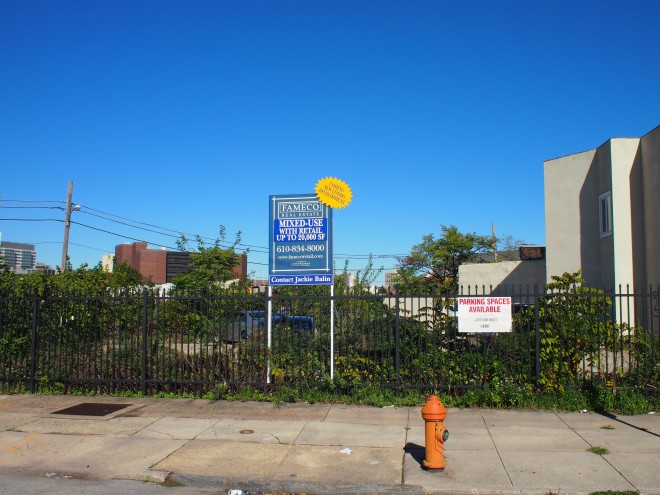 Designed by Campbell Thomas Architects, the G-Ho firm best known for work in preservation and the planning of trails and bike paths, and Stephen Nebel of the Berlin firm LABhaus (Nebel is a G-Ho native who moved to Berlin to be near top contemporary designers), the building is notable for its ample–10,000 square foot–retail component, significant green elements, and its modular construction. Most of Bloc 23 will be built at the factory of Professional Building Services in Middleburg, Pennsylvania, three hours away. Then it will be assembled in ten days on site.

Because of site and access constraints, modular construction isn’t always appropriate for tight urban parcels and it won’t ever work for renovation of existing buildings, but at this project it will save time–cutting construction days in half–labor costs, and critically, according to the project’s developer Stephen Rodriguez and its architect Jim Campbell, lead to gains in sustainability performance. “We have been working on modular construction for years and we think that this type of construction is definitely part of the future,” said Campbell. “Modular or prefabricated construction brings some efficiencies and because of these efficiencies, they may be more sustainable.”

Rodriguez, an aerospace engineer who designs helicopter parts at Boeing and graduated with a mechanical engineering degree from Drexel in 2001, sees factory-made building components as the future, particularly for engineering long spans of roofing, window glazing, and the fitting of building parts together. “When you see it,” he said, “it’s instantly recognizable as superior green technology.” 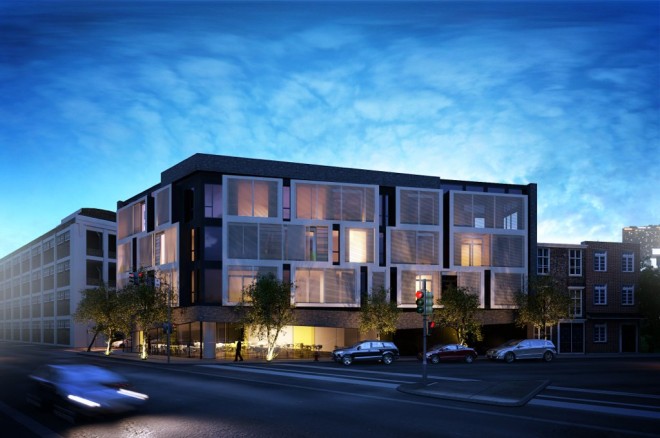 According to the developer, it also allows him to build a top of the line, fully-fitted project at a comparable cost to other, more standard projects. Some of that savings is in labor, but lending and holding costs are also significantly reduced by shrinking the project schedule. As for labor, Rodriguez says union crews will be doing the site work and assembling the building. The 40,000 square foot building will cost $6-7 million, all in.

Rodriguez saw his challenge as lowering costs while increasing the design quality for a major site that demanded a thoughtful, but also progressive design. “He is smart,” said Campbell, “motivated, very concerned about the community and the environment, and wants to do good contemporary architecture.”

“I refused to put up another mediocre building,” said Rodriguez, referring pointedly to the Toll Brothers development–a project he says has no architect, “designed by lawyers”–“and so we took what others were doing and just did the exact opposite.” 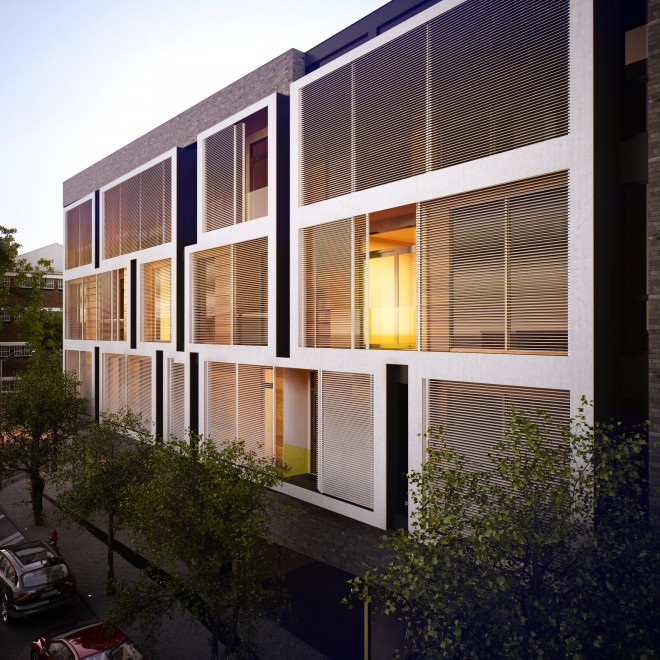 “Each unit is somewhat special,” says Campbell. “Sizes vary (700-2,500 square feet), offering a wide range of possible housing solutions. Since the units are manufactured from the inside out rather than with conventional construction from the outside in, they will be very energy efficient. To add to the energy efficiency and since the building has primary east, west, and south exposures, we are providing each unit with a solar screen to help reduce the solar gain in the summer and to help keep them naturally cool.” The building also has a stormwater control system.

There are private and shared terraces, a green roof, underground parking. “We wanted to create a plausible alternative to the townhouse to appeal to families and other permanent residents,” said Rodriguez, who will move in with his wife and two children. 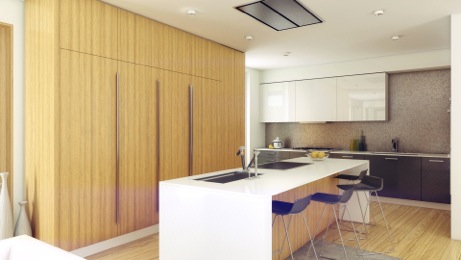 The appeal for the neighborhood is in high quality materials and the treatment of the street. Rodriguez said contrary to conventional wisdom, there is so much retail demand, “I could have built all 40,000 square feet as retail.” Outdoor seating is planned for the three to four retail spaces that will take advantage of the wide 12-14 foot sidewalks; and the sidewalk itself, with pervious pavement and rainwater acceptors, is incorporated into the building’s design.

“I want to shame the other developers who are ten times more financially successful than I am into doing something better,” said Rodriguez.