Editor’s Note: On this day that so many children return to school, we bring you inside three city schools that won’t be opening this year, captured in film while still intact by photographer (and Daily contributor) Katrina Ohstrom for a show at Temple Contemporary that opens Friday. A panel discussion “The State of the Philadelphia Public School System,” moderated by the the Inquirer’s Dale Mezzacappa, takes place Thursday evening (and you’ll get a chance to see the exhibit then too). Register for the panel discussion HERE. Hidden City creative director Lee Tusman caught up with Ohstrom for some insight on this moving project.

Lee Tusman: In your own photography practice, you photograph themes such as urban decay, hand-lettered signs, things hanging in windows, ironic juxtapositions in the street, and various subcultures, like your TICA International Cat Show photobook. You’re particularly a great documenter of street life in your previous Kensington neighborhood. I’ve always loved Photographer Alec Soth’s business card that listed his shooting subjects, which include: mattresses, unusually tall people, Memphis, neighborhood bars, supermarket cashiers, museum guards, sleeping children and sedans. What would you say is your list of subjects?
Katrina Ohstrom: It’s not so much that I “like” photographing a lot of my subjects per se, but more that I feel compelled to document a particular moment in a particular place (with the street photography), because any given vignette that I stumble upon may very well not exist in a month, a week, even a couple of hours later. With my ongoing documentary projects (cat show culture, dilapidated barns in Central New York, decommissioned public school buildings), there is certainly still the compulsion to document but even more so, there is a drive to tell a story that is much larger than any individual image could ever aspire to. At first glance, the subjects of my photographs may seem quite random but what ties them all together, I think, is a profound sense of cultural despair, a sort of nonconsensual suicide pact that we’ve all signed but that only some of us embrace. 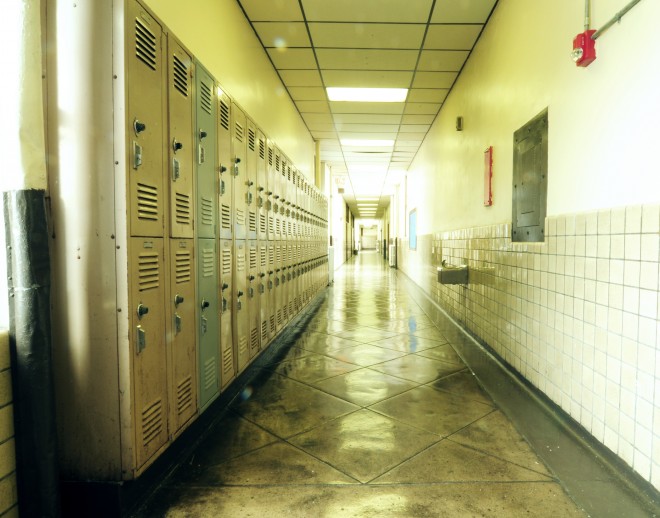 LT: For the exhibition of your work at Temple Contemporary, you created a series of that documents schools that will not open in the coming school year in Philadelphia. Many of your photographs can be seen as having a sad or somber tone, while others have a sense of the thrill of discovery. Did you find the subject depressing, or do you have a sense of detachment when shooting your subjects?
KO: Walking around the three schools featured in the exhibition was definitely an emotional experience. There was a teacher packing boxes in almost every classroom, students had written goodbye notes on the chalkboards, library shelves were totally cleared out, everybody I talked to was in a bit of a state of shock that this was actually happening.
KO: Knowing that within a few months, these gorgeous old buildings would most likely begin to go the way of so many other abandoned schools that I’ve photographed (cannibalized by scrappers, windows smashed, walls covered in graffiti, full of syringes) was depressing for sure, but at the end of the day, they are just three more empty buildings in neighborhoods full of empty buildings. Preservation of old/historic structures is certainly important but the truly depressing thing is the current state of the Philadelphia public school system (which is being mirrored around the country), and the ripple effect that this is having on our neighborhoods, in particular those comprised primarily of people of color who are the lowest end of the socioeconomic spectrum. 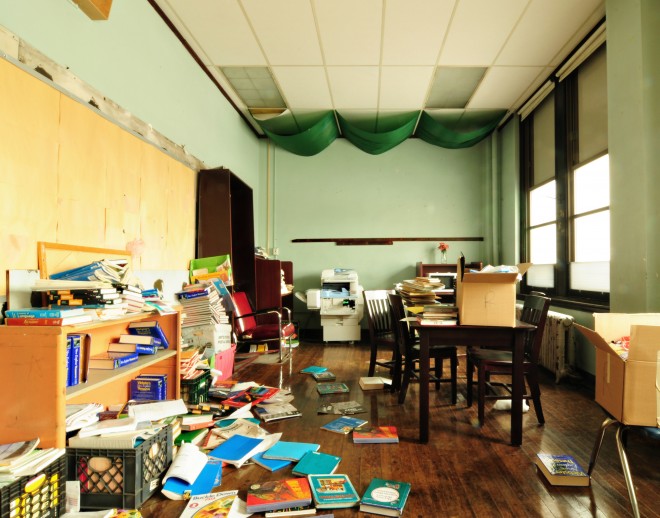 LT: We’ve run articles on the Hidden City Daily and there have been numerous discussions online about “ruin porn” where some posit that this kind of photography exploits decaying infrastructure. Do you view your photographs as documentation, or are they meant to prompt action? Or maybe I mean to ask, how do you want your viewers to respond?
KO: Certainly there are photographers and urban explorers whose motivations may be self-serving, but to some extent, I think that criticism of “ruin porn” misses the point in that it lumps those documenting the most obvious symptom of collapse into the same category as “poverty tourists” in the developing world. The real exploitation of decaying infrastructure is happening on a governmental/corporate level. The only influence that I exert over how my photographs are interpreted is by making an effort to present them in an academic/documentary context rather than simply as “art.” My intention is that these images will eventually be viewed in context with other documentary projects that I am working on (rural collapse and it’s subsequent exploitation, the juvenile prison system, etc.) and some dots will be connected, but at the end of the day, if people choose to view the images strictly for their aesthetic qualities, I have no control over that.

LT: How did you choose the format, number of photos, and the concept of shooting “school portraits” of abandoned schools?
KO: The curators at Tyler’s Temple Contemporary Gallery saw my photographs of other abandoned Philadelphia schools and asked me to document the three schools that were permanently closed this summer due to the restructuring of the district. We met a couple of times to collaborate on the concept and get on the same page in terms of format and number of images. Working with them has been a really great experience and I am particularly excited about the panel discussion on the 6th.

LT: You worked with the school district to get permission to photograph these now vacant schools. Did they express interest in your project?
KO: Initially, I attempted to contact individual schools to gain access and permission to shoot but I think things were a bit too chaotic on their end and I kept hitting a wall. I ended up corresponding with the Office of Communications at the central office and they were tremendously helpful in arranging access to the buildings. Some of the principals and teachers I spoke to when I was there were really interested in the project, though a few people I encountered were suspicious at first that I was just another scout from a charter school looking into buying the buildings. 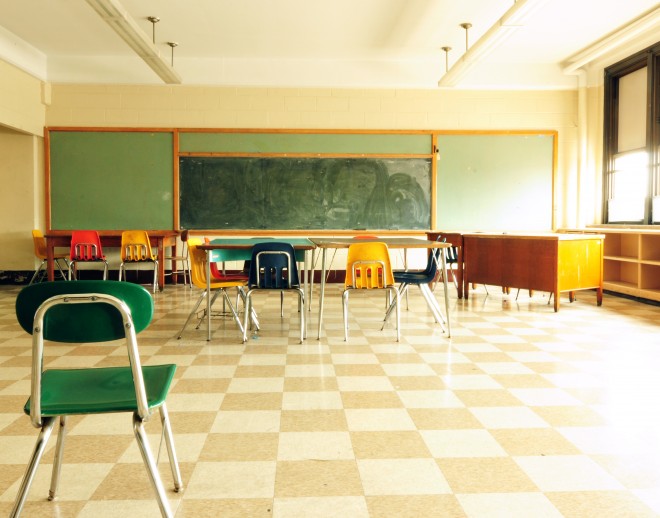 LT: Do you think you’ll continue the school portraits series after this exhibit?
KO: I would like to continue to document the restructuring of the Philadelphia School District as dozens of schools are permanently closed over the next several years while segueing into an exploration of the juvenile justice system and the school to prison pipeline.