Phillyhenge, Or The City As Sundial 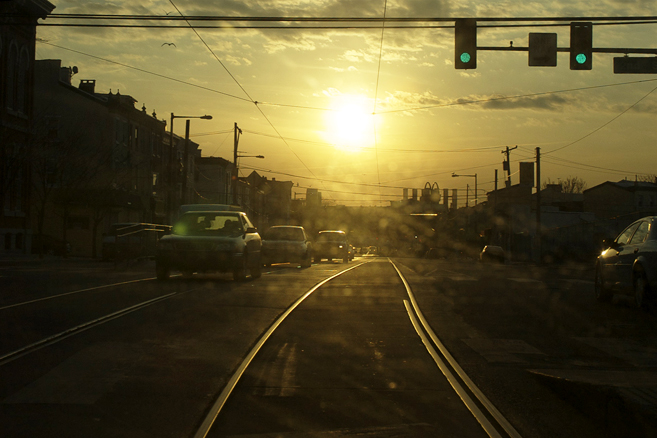 Tonight at 7:24, the sun will hang for a moment just above the double yellow line of Market Street before dropping below the horizon somewhere west of 69th Street. Falling as it does just after Labor Day every year, this “Phillyhenge” will mark the passing of another summer, this last summer being the 329th to pass since Thomas Holme first drew that slightly off-kilter line that would become Market Street.

Most days, Philadelphia’s street grid belongs to the city alone. East, west, north, south, left, right, it gets Philadelphians from here to there. But a few days a year, it becomes a great civic sundial, registering Philadelphia’s place in the cosmos. On these days, ranks of buildings become ancient steles and the sun sets in perfect alignment with the street grid. It’s Phillyhenge.

The -henge appendage of course, recalls Stonehenge, that ancient relic of a time when people built for the sun. Their greatest monuments were a means of registering the universe and their place in it. Stonehenge aligns with the extents of the sun’s arcing annual trip through the sky, marking the solstices twice a year since its construction around 2600 BC. By Penn’s time, people built for the exigencies of man, but of course, these annual coincidences with the sun cannot be escaped.

The “henge” phenomenon is shared by many gridded cities, the most notable being Mahattanhenge, when the canyons of crosstown streets blaze with the setting sun. The picturesque occasions have become particularly popular with professional and amateur photographers alike. This July, the event seemed to garner more attention than ever, with hordes of Instagrammers crowding the medians of 34th Street at sunset. In most places, Philly among them, the alignment gets much less attention, perhaps just the frustration of a westbound motorist. 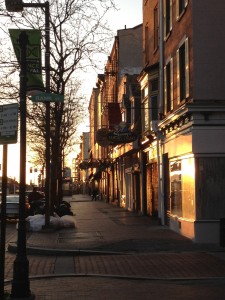 When Thomas Holme drew out the iconic plan of Philadelphia in 1683, the streets paralleled the edges of the pages, running in perfect straight lines from East to West. In geographic reality, the geometric grid came into being a little off-kilter.  The north-south axis of Broad Street got a little shove to better align with the peninsula on which the city sits, landing it at about 9 degrees east of true north, not quite the rakish angle of Manhattan’s grid (29 degrees off axis), nor the geometric precision of the American West’s relentless, perfect grid. For everyday use, this is close enough. The sun rises over the Delaware and sets over the Schuylkill. East, west, north, south on the grid are perfectly legible, if not perfectly precise.

A few times a year the grid grants us this brief reminder that Philadelphia is just one place in a larger space and time. When the sun sets down Market Street tonight, it will register the passing of another year, and if it’s not too cloudy, you might just be able to watch that year go by.

Fortunately, there will be many more.  Upcoming Phillyhenges: